Arctic Ice and the DMI deficit


Another great example of Anthony Watts' crazy making over at WUWT

Arctic Ice and the DMI deficit

"There’s been some interest in these before and after graphs highlighted by the blog “sunshinehours” here.

DMI being the Danish Meteorological Institute who recently revised their ice cover graph incorporating previously "unclassified coastal regions."  This slightly reduced the number for the total Arctic ice loss this summer.
It was predictable that WUWTzers would jump on that as more evidence the community of scientists can't be trusted, etc, etc.  But anyone who is familiar with Earth Sciences knows that it's untidy by it's very nature - it's not like physics or rocketry were replicability and >99.99% accuracy must be achieved.  And it is dishonest to attack every ragged edge of the mantle and imply nothing can be deduced until such unrealistic standards are achieved.  That approach is nothing more than a mesmerists trick to distract from what's really happening out there.
As for what they are having such an uproar over, look at the two DMI graphs:
before
http://ocean.dmi.dk/arctic/old_icecover.uk.php 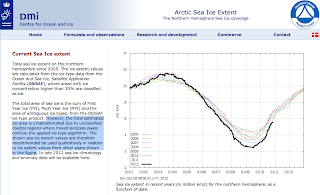 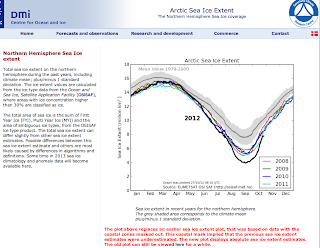 You know looking at the graphs side by side their differences are startlingly minor in contrast to the bigger story they tell.  And it's been pointed out the DMI clearly explained:


"However, the total estimated ice area is underestimated due to unclassified coastal regions where mixed land/sea pixels confuse the applied ice type algorithm. The shown sea ice extent values are therefore recommended be used qualitatively in relation to ice extent values from other years shown in the figure. In late 2012 sea ice climatology and anomaly data will be available here. "
~ ~ ~ ~ ~ ~ ~ ~ ~ ~
Earth sciences never achieves 99% accuracy nor 99% reproducibility, bet we can still learn from it.   The overwrought responses in these comments seems like strategic tunnel focus meant to avoid the bigger message: Arctic summer sea ice is disappearing way too fast for comfort.

As for the influence of storms on the ice loss - you can learn more in an October 19th post over at SkepticalScience:  "What Role Did the Arctic Storm Play in the Record Sea Ice Minimum?" 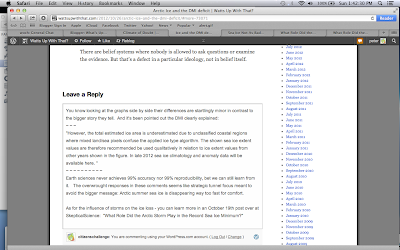 Anthony's crazy making aside for those interested in learning more about what's happening in the Arctic and the science... as opposed to the politics of shouting down the science please refer to this interesting examination of the observations and science issues along with facts Anthony chooses to hide from his fans.

What Role Did the Arctic Storm Play in the Record Sea Ice Minimum?


Posted by citizenschallenge at 11:53 AM