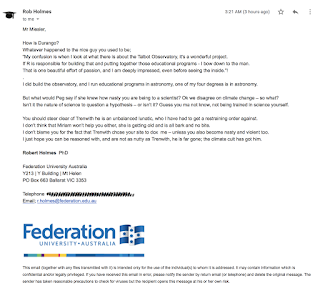 I’m curious, was your letter written on University time?  How would the Federation University of Australia feel about you using their logo as a shield to impress and intimidate?
Read more »
Posted by citizenschallenge at 7:32 AM 1 comment:

Dr. Robert Ian Holmes, aka 1000Frolly, why are you threatening me?

Though I was given the tip years ago, it wasn't until this morning that I'm able to confirm for myself that the prodigious YouTube liar and AGW science slandering 1000Frolly is in fact one Dr. Robert Ian Holmes from Australia.  (not to be mistaken with Hulme!)

A 'scientist' with rather tarnished credentials thanks to his efforts to convince folks that CO2 science is mistaken.  Writing that's so disconnected, even climate science contrarians dismiss it.

click on image for better view
Welcome to the Age of Trumpkins - where truth is despised and bullying is everything.  This is what decades of liberal intellectual complacency has achieved for our global society.

Right now I really need to focus on a more important writing project, so can’t let this sidetrack me more than it already has.  Besides it would be good to let this steep awhile, since I have a number of responses and questions for this Dr. Robert Holmes, whom I actually had not had time for in years, but who seems scintillatingly upset at a couple confusing comments Bob Trenwith recently dropped at WUWTW.

“Inciting mob violence”?  Seriously Dr Holmes?  What are you talking about?  Please.  Or are we simply dealing with another frantic drama queen, . . . or what?  Can you explain yourself?

For now I'm going to settle for a trip down memory lane and a look at my tenuous involvement in this Dr. Holmes/1000frolly/Monckton distraction.

Read more »
Posted by citizenschallenge at 12:57 PM No comments:

After reading Hulme's "Am I a denier, a human extinction denier?" he invites us to read: "‘We Always Get the Weather We Deserve’: The Tenacious Grip of Moral Accountability."   So I did.  It was an even deeper exploration into his Mindscape rather than climate science.  Needless to say, this essay also deserves a serious examination.
I'm looking for a job, researcher and writer,
dedicated to confronting the deliberate calculated lies
of the climate science contrarian community!
PO Box 56
Durango, Colorado 81326
citizenschallenge - at - gmail com 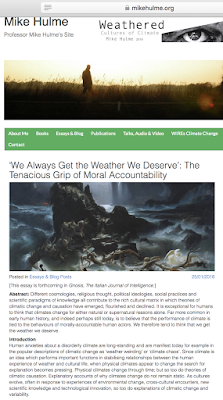 Read more »
Posted by citizenschallenge at 10:55 AM No comments:

Prof. Mike Hulme gets lost in his Mindscape. An examination.

Yesterday I read an ATTP post about Mike Hulme’s controversial May 27th article, "Am I a denier, a human extinction denier?" I did a double take.

Weren't they just saying, “No Manmade Global Warming” - then it was “No Catastrophic Warming” - now we’re up to, “No Human Extinction” - anyone else notice a disturbing pattern here?  It made me curious so I read it and found myself recalling the Missing Key, the magisteria of Physical Reality vs the magisteria of our Human Mindscape.

I don’t know Hulme.  I do know his article did nothing to recommend him.  It was a contrived piece of…, of…, I don’t know, manipulative nothing.  A waste of time if constructive learning was one’s goal.
However, it offers a great case study in getting lost within one’s own Mindscape and forgetting all about the Physical Reality ‘out there’.  That’s why I decided to dissect Hulme's article and add it to my collection.
In truth, I don’t know if Hulme considers himself a libertarian or not, I do know his words parrot libertarian arguments and logic so I’m comfortable assuming he is until told otherwise.
~~~~~~~~~~~~~~~~~~~~~~~
Am I a denier, a human extinction denier?
@ mikehulme.org  |  27/05/2019
REPRINTED UNDER PROTECTION OF FAIR USE COPYRIGHT LAWS.
My intention is a review of ‘libertarian' deception in action.

¶1  There has been a lot of talk recently about climate change and extinction.
¶2  It is undoubtedly the case that species go extinct.  And sometimes large numbers of species disappear together in mass events caused by the same physical stresses.  It is also true that at some point in the future the human species will go extinct, or at the least evolve into a new species partly of our own making.

Earth Centrist, why it matters.

The human spirit keeps us striving.  Making an effort matters.  Lately, I've been telling myself I need to speak up, as in go beyond just writing.  Not an exciting idea for an introvert.  Still, these days there are go-arounds.  I'm old enough to be in total awe at this iPhone of mine.  I mean beyond phone, it's a good camera and mic, texting apparatus, adding machine, compass, internet connection, I mean it's better than Star Trek which was outta this world not that long ago.

So here it is, my Take #1,  "Earth Centrist" introduction, less than two minutes.  A short overview of why it matters to me.  Spoiler, I'm not big on staring into the screen, besides it's the words and ideas they are trying to describe that are important.  Also, I love where I've been blessed to live and might as well share some of the beauty.  It's prettier than I am, that's for sure.   ;- )

"Peter, why are you an Earth Centrist?"*

Posted by citizenschallenge at 8:33 AM No comments: