Unfortunately, my current work load has kept me from pending projects, but I haven't forgotten them.  This Sunday evening I found myself revisiting the Jim Steele Affair that I wrote about in March {and here}, April, May, trying to catch up on his latest shenanigans.  In the process I found this very good examination of the game Jim Steele is playing.  It's written by Catmando over at IngeniousPursuits.blogspot.com.

Much of the article is about Steele's twisted attack on the documentary "Years of Living Dangerously" though I've clipped most of that portion of his article in this reposting.  What I've left in place is Catmando's thoughtful exposure of how a phony misuses the quotes of a great, solid scientist such as Richard Feynman.

It is well written, insightful and worth the read, and I'm happy to share parts of it over here and encourage you to visit IngeniousPursuits.blogspot.com and read the entire article - then pass it along to others who care and want to better understand the game these disingenuous frauds such as climate science denier Jim Steele and his seeming mentor Anthony {the contrarian} Watts are playing on a gullible public.

I'll give Jim Steele his due.  He is the first denier I have ever seen come up with perhaps the most important Richard Feynman quote of all:

[There is an] idea that we all hope you have learned in studying science in school—we never explicitly say what this is, but just hope that you catch on by all the examples of scientific investigation. It's a kind of scientific integrity, a principle of scientific thought that corresponds to a kind of utter honesty—a kind of leaning over backwards.

For example, if you're doing an experiment, you should report everything that you think might make it invalid—not only what you think is right about it; other causes that could possibly explain your results; and things you thought of that you've eliminated by some other experiment, and how they worked—to make sure the other fellow can tell they have been eliminated.

I've crossed the first bit out because Steele doesn't use that.  You can check here (archived).  You can also see that he didn't bother with the next paragraph:

Details that could throw doubt on your interpretation must be given, if you know them. You must do the best you can—if you know anything at all wrong, or possibly wrong—to explain it.

If you make a theory, for example, and advertise it, or put it out, then you must also put down all the facts that disagree with it, as well as those that agree with it.

In summary, the idea is to try to give all the information to help others to judge the value of your contribution, not just the information that leads to judgment in one particular direction or another.  {my highlights}
[Feynman quotes from here]

Perhaps there is a reason why he didn't bother with the second paragraph but it is an important one.  I can't remember ever seeing a post proposing something at WattsUpWithThat actually doing what Feynman says here.
Give alternative explanations.  {my bold}

But, wait, deniers can't do that because the people reading their denialist thinking might actually see that the consensus view is the right one.

And that will never do.

Steele's article is a crocodile tears exercise in whinging.  Steele is moaning about the US TV series Years Of Living Dangerously which we in the UK have yet to see, although you can see episode one at the show's website.

Deniers won't like the series.  It is aiming to tell the science of climate change through human stories.  It may not entirely succeed (I can't know from just seeing one episode) but it is important that the science is heard loud and clear.  Alongside Cosmos, the updated remake of the classic Carl Sagan series, there is a two pronged attack on anti-science.  Not surprisingly, Steele doesn't enjoy his current viewing.

You know that Jim Steele has jumped the shark when he adduces Pastor {evolution is impossible} Rick Joyner to his side.  Joyner, according to Steele,  "embodies Albert Einstein’s advice to “Never Stop Questioning.”"  That's hilarious.  (Pastor) Joyner is an adherent of dominion theology which aims to have government on Christian grounds according to Biblical law.  I suspect Joyner has stopped questioning that one.  For more Joyner fun, click here.

In trying to make a case, Steele doesn't follow Feynman.   The "contrasting satellite data that shows the global average has not risen in 17 years" is this: 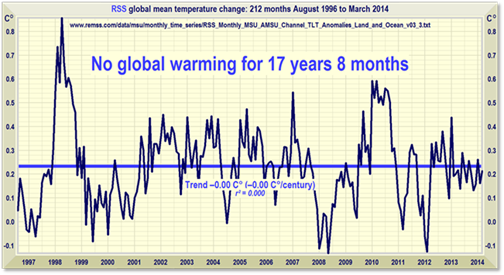 A couple of things - satellite data is not the only source of information about temperatures available.  What story do the others tell?  Secondly, any trend of exactly 0.00 should ring bells.  Especially as this graph keeps growing longer and longer, just like Pinocchio's nose but the trend keeps on at 0.00.  Natural phenomena don't do that.  What's going on?  Does anyone know? {bold added}

On one thing I can agree with Steele:

We are all blinded by our illusions and we can only free ourselves from those illusions by careful observations, experiments and respectful debate.

I contend he is blinded by his illusions.  He admits his Christian past but I am not sure he understands it:

Abraham’s willingness to sacrifice his son to be closer to God is religion’s equivalent of Feynman’s ideal scientist who leans over backwards to prove that he has not been fooled by clinging to a cherished belief.

And the Golden Rule (of reciprocity) is common to every religion and older than both Christianity and Judaism.

But back to Steele's article.  One can delight at the hypocrisy:

Accordingly climate alarmists have circled the wagons and refused to debate with climate skeptics, preferring hit pieces such as Years of Living Dangerously.

And the deniers don't do hit pieces like, for example, Steele's one.  But there you go.  And the reason why climate scientists don't debate the deniers - you only have to see Lord Monckton's mendacious presentations to realise that all the denier has to do is sew doubt.  And science isn't settled by debates.  And debates are a game.  It isn't rocket science, Jim.

I suggest they will be better scientists if they emulated Pastor Joyner, and listen to all sides, promote more debate, and then let the truth lead us wherever it may.

As Pastor Joyner himself says on his Facebook page:

Each of these in their pure form is in basic conflict with the others. If you understand these worldviews, you will have a basic understanding of virtually all of the conflicts in the world today.

Just letting Jim know that Joyner doesn't have a clue.

15% of the world are Hindus.  That's 1.1 billion adherents.  Bhuddists make up more than 500 million people.  In Joyner's mind there might be four worldviews.  In mine there are dozens.  Question everything?  Yeah, right.   And Marxist worldview.  What century is he living in? ...

Posted by Catmando  May 7th, 2014 ~ http://ingeniouspursuits.blogspot.com

PS. so we don't loss sight of what this is all about:

WAKE UP, SOUND THE ALARMS - WE HAVE A PROBLEM HOUSTON !
Posted by citizenschallenge at 9:28 PM