Here's an informative post worth passing along, it's a good description of one of my pal Mr. Steele's main strategies, right up there with misrepresenting what scientists have actually written and said.  I tip my hat to SkepticalScience.com for making me aware of this article

Michael Mann writes that the strategy 'is similar to what happens when a group of lions on the Serengeti seek out a vulnerable individual zebra at the edge of a herd.' 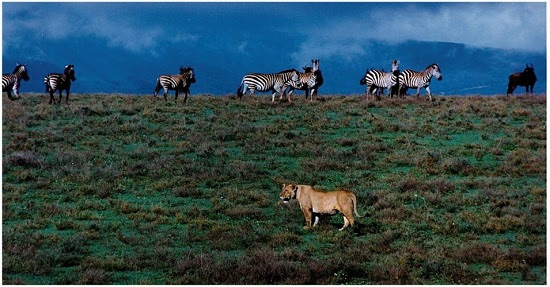 "The 'Serengeti strategy' is often employed wherever there is a strong and widespread consensus among the world’s scientists about the underlying cold, hard facts of a field, whether the subject be evolution, ozone depletion, the environmental impacts of DDT, the health effects of smoking, or human-caused climate change," Mann writes. (Photo: Bulletin of Atomic Scientists/Brocken Inaglory)
Like lions targeting lone zebras in the Serengeti grasslands, industry-backed climate change deniers prefer to target individual scientists rather than take on an entire scientific field at once, climatologist Michael Mann writes in a paper published this month in the Bulletin of the Atomic Scientists.
In "The Serengeti Strategy: How Special Interests Try to Intimidate Scientists, and How Best to Fight Back," Mann describes a concerted effort on the part of fossil fuel interests who find themselves facing overwhelming scientific consensus about the threat of human-caused climate change—and, by implication, the necessity to reduce global carbon emissions.
"By singling out a sole scientist, it is possible for the forces of 'anti-science' to bring many more resources to bear on one individual, exerting enormous pressure from multiple directions at once, making defense difficult," writes Mann, director of the Earth System Science Center at Pennsylvania State University. "It is similar to what happens when a group of lions on the Serengeti seek out a vulnerable individual zebra at the edge of a herd."


Unfortunately, the strategy is effective, he says, which is why similar tactics have been employed by the chemical and pharmaceutical industries, big agriculture, and "just about any corporate interest that has found itself on a collision course with scientific research—particularly research that reveals specific potential damages or threats caused by their product."
"It is difficult to take on an entire group of scientists at once," Mann explains. "But bringing down individuals is easier, and it serves the larger effort of dismissing, obscuring, and misrepresenting well-established science and its implications. What’s more, these highly visible tactics create such a negative atmosphere that other scientists are discouraged from conveying their research’s implications to the public."
Mann, one of eight lead authors of the "Observed Climate Variability and Change" chapter of the Intergovernmental Panel on Climate Change Third Scientific Assessment Report published in 2001, found himself the target of such attacks following the publication of his well-known 'hockey stick' graph depicting temperature changes over the past thousand years. The graph emerged as an iconic image of human-caused climate change, conveying a simple, straightforward message about the reality of global warming.
As a result, "I was subject to what The Washington Post and The New York Times denounced as an 'inquisition' and a 'witch hunt' by politicians in the pay of fossil fuel interests, looking to discredit my work," he writes.
To counter the so-called Serengeti Strategy, Mann says he has become "a passionate believer in the role of the 'scientist-advocate'"—and has become one himself, eager to convey the facts and implications of climate change and to engage with skeptics.
Citing the late Stephen Schneider, a Stanford University climate change scientist who Mann says was one of the earliest victims of such attacks, he adds: "[B]eing a scientist-advocate is not an oxymoron. If scientists choose not to engage on matters of policy-relevant science, then we leave a void that will be filled by industry-funded disinformation."
Mann concludes on a note of optimism. "We scientists must hold ourselves to a higher standard than the deniers-for-hire," he declares. "We must be honest as we convey the threat posed by climate change to the public. But we must also be effective. The stakes are simply too great for us to fail to communicate the risks of inaction."

Also see: Thisness of a that
Metaphors for the world ahead – science, climate, and the low carbon future.
http://thisnessofathat.blogspot.com/2012/04/serengeti-strategy.html

Posted by citizenschallenge at 10:21 AM