More facts to help expose the lie behind Libertarians Deregulation Siren’s Song.  Here's another example of Enlightened Self-Interest showing itself to be the more rational constructive way to approach our problems.  I’ll leave the rest of this story to someone who can explain it better than I can.
These are the facts we need to learn about and share with others.
_______________________________

The White House Office of Management and Budget on Friday evening released its annual report on the costs and benefits of federal regulations, showing that the benefits of major Obama-era rules far exceeded the costs.

President Donald Trump’s administration has been on a deregulatory bender, particularly when it comes to environmental regulations. As of January, the New York Times counted 67 environmental rules on the chopping block under Trump.

This is not one of Trump’s idiosyncrasies, though. His administration is more ham-handed and flagrant about it, but the antipathy it expresses toward federal regulation falls firmly within the GOP mainstream. Republicans have been complaining about “burdensome” and “job-killing” regulations for so long that their opposition to any particular health, safety, or environmental regulation is now just taken for granted.

For instance, why would the Environmental Protection Agency close a program investigating the effects of toxins on children’s health? Is there some evidence that the money is wasted or poorly spent? Why would the EPA allow more unregulated disposal of toxic coal ash? Don’t people in coal regions deserve clean air and water? Is there any reason to think coal ash is currently well-regulated? …
…
As it happens, though, we know something about the costs and benefits of federal regulations. In fact, Trump’s own administration, specifically the (nonpartisan, at least for now) White House Office of Management and Budget (OMB), just released its annual report on that very subject. (Hat tip to E&E.) …
…

OMB gathered data and analysis on “major” federal regulations (those with $100 million or more in economic impact) between 2006 and 2016, a period that includes all of Obama’s administration, stopping just short of Trump’s. The final tally, reported in 2001 dollars:
• Aggregate benefits: $219 to $695 billion
• Aggregate costs: $59 to $88 billion 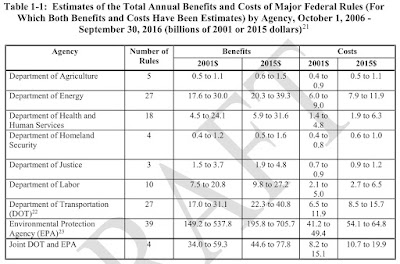 By even the most conservative estimate, the benefits of Obama’s regulations wildly outweighed the costs.

According to OMB — and to the federal agencies upon whose data OMB mostly relied — the core of the Trumpian case against Obama regulations, arguably the organizing principle of Trump’s administration, is false.

Environmental regulations have the highest costs and highest benefits

At least since Reagan, conservatives have had particular and growing hostility toward environmental regulations. This has proven a source of great anguish to (older) environmentalists, who lament that such regulations used to be bipartisan.

But the right-wing turn against environmental rules is no great mystery. …
(link to the full story)

Posted by citizenschallenge at 8:47 AM