A collection of articles examining the claims by "news reporter" David Rose.

We'll start this collection with a post by the official Met Office blog,  followed by a few more interesting articles examining the logic of David Rose


Today the Mail on Sunday published a story written by David Rose entitled “Forget global warming – it’s Cycle 25 we need to worry about”.

This article includes numerous errors in the reporting of published peer reviewed science undertaken by the Met Office Hadley Centre and for Mr. Rose to suggest that the latest global temperatures available show no warming in the last 15 years is entirely misleading.

Despite the Met Office having spoken to David Rose ahead of the publication of the story, he has chosen to not fully include the answers we gave him to questions around decadal projections produced by the Met Office or his belief that we have seen no warming since 1997.

For clarity I have included our full response to David Rose below:A spokesman for the Met Office said: “The ten year projection remains groundbreaking science. The complete period for the original projection is not over yet and these projections are regularly updated to take account of the most recent data.

“The projections are probabilistic in nature, and no individual forecast should be taken in isolation. Instead, several decades of data will be needed to assess the robustness of the projections.

“However, what is absolutely clear is that we have continued to see a trend of warming, with the decade of 2000-2009 being clearly the warmest in the instrumental record going back to 1850. Depending on which temperature records you use, 2010 was the warmest year on record  for NOAA NCDC and NASA GISS, and the second warmest on record in HadCRUT3.” 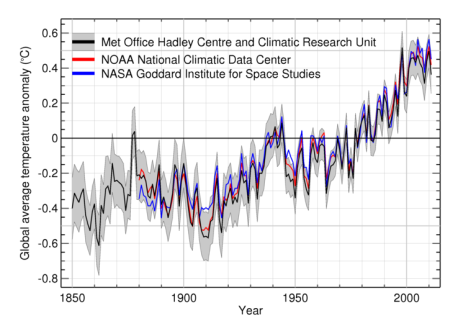 Furthermore despite criticism of a paper published by the Met Office he chose not to ask us to respond to his misconceptions. The study in question, supported by many others, provides an insight into the sensitivity of our climate to changes in the output of the sun.

It confirmed that although solar output is likely to reduce over the next 90 years this will not substantially delay expected increases in global temperatures caused by greenhouse gases. The study found that the expected decrease in solar activity would only most likely cause a reduction in global temperatures of 0.08 °C. This compares to an expected warming of about 2.5 °C over the same period due to greenhouse gases (according to the IPCC’s B2 scenario for greenhouse gas emissions that does not involve efforts to mitigate emissions).  In addition the study also showed that if solar output reduced below that seen in the Maunder Minimum – a period between 1645 and 1715 when solar activity was at its lowest observed level – the global temperature reduction would be 0.13C.

http://www.carbonbrief.org/blog/2012/10/this-weeks-top-six-rebuttals-of-david-roses-warming-has-stopped-claims
Six articles explain why different aspects of Rose's article are unfounded:
Number 1. On the same day that The Mail on Sunday published Rose's article, The Met Office released a public statement on its blog, correcting claims in Rose's article about what the Hadcrut4 dataset does or doesn't show about climate change. The post included the Met Office's full response to Rose's direct - and in some cases leading - questions, exposing Rose's misrepresentation of the science.
Number 2. Rose picked part of a graph that appeared to support his argument, soThinkProgress published an article on Monday with ten charts that clearly show that global warming didn't stop 16 years ago, including how much global warming is going into other components of the climate system, notably the oceans.
Number 3. On Tuesday, the Guardian re-published a deconstruction of Rose's argument by Dana Nuccitelli, an environmental scientist and contributor to Australian fact checking website Skeptical Science. Nuccetelli published a scientific paper with colleagues a few days before the Mail on Sunday's article, which pre-bunked Rose's claims. The Guardian article also criticises Rose's other interviewee, Professor Judith Curry, for her interpretation of the role of natural climate variability and her attack on climate models.
Number 4. Also on Tuesday this week, Media Matters, a not-for-profit organisation which corrects misinformation in the US media, issued a no-holds-barred criticism of Fox Nation for accepting Rose's story uncritically, after the Met Office had already branded it misleading.
Number 5. An article yesterday by Bob Ward, Policy and Communications Director at the Grantham Research Institute on Climate Change and the Environment, dug deeper into the Met Office's Hadcrut4 dataset and suggests Rose manipulated it to create a false graph. The article also describes Rose's track record for producing similar pieces for the Mail on Sunday.
Number 6. Earlier today, Potholer, a Youtube channel which reports on scientific research and fact checks mainstream media coverage of science, released a video highlighting how quickly media outlets around the world accepted Rose's story without checking the source.


Human emissions of heat-trapping greenhouse gases have risen so rapidly that they now overwhelm any plausible decrease in solar activity.  Indeed, a paper from last June found that even if the Sun goes into “Hibernation” it won’t stop catastrophic global warming.
But that doesn’t stop serial disinformer David Rose of the UK’s Daily Mail from misleading the public — even after being slammed by top scientists in 2010 for falsely asserting “no global warming since 1995″ — see “Error-riddled articles and false statements destroy Daily Mail’s credibility.“  Rose has another willfully misleading piece, “Forget global warming – it’s Cycle 25 we need to worry about (and if NASA scientists are right the Thames will be freezing over again): Met Office releases new figures which show no warming in 15 years.”
~ ~ ~ ~ ~ ~ ~ ~ ~ ~ ~ ~ ~

The Mail on Sunday gives David Rose space to repeat old (and wrong) claims that “global warming has stopped”.

http://www.carbonbrief.org/blog/2012/10/response-to-david-rose-global-warming-has-stopped
Skeptic journalist David Rose published a two-page spread in the Mail on Sunday yesterday entitled "Global warming stopped 16 years ago, reveals Met Office report quietly released… and here is the chart to prove it." This is the latest in a series of articles on the same theme. We take a look at why Rose's claims are wrong this time.
The Mail on Sunday seems to print articles by Rose arguing that warming has stopped aboutonce every six months - so maybe we were about due for one. The Met office has already responded to misleading information in an article in January by David Rose on the same topic, but he seems determined to peddle the same myths.
This time, the Mail on Sunday also gives Rose space for a half-page comment piece in which he argues that the slow-down in warming over the last decade "poses a fundamental challenge to the assumptions underlying every aspect of energy and climate change policy."
~ ~ ~ ~ ~ ~ ~ ~ ~ ~ ~ ~ ~

By Joe Romm on Jan 30, 2012 at 12:32 pm
http://thinkprogress.org/climate/2012/01/30/414478/daily-mail-warming-human-emissions-dwarf-any-solar-changes/
Human emissions of heat-trapping greenhouse gases have risen so rapidly that they now overwhelm any plausible decrease in solar activity.  Indeed, a paper from last June found that even if the Sun goes into “Hibernation” it won’t stop catastrophic global warming.

You can divide people into two categories: those who learn from their mistakes and those who don't. There is no third category: we all mess up from time to time.

I’ve never met David Rose of the U.K.’s Daily Mail. And, while his past reporting on climate issues has tended to misrepresent the science of the day, it is entirely possible his editors are to blame for the fictionalization of his latest story. So I won’t point fingers at this juncture. Regardless, the affair is an ominous reminder of how easily an idea can migrate across the world in a matter of hours even though anyone with a middle-school education could spot the flaw within a few seconds.


Posted by citizenschallenge at 8:03 AM