I appreciate bringing this up while much of the nation is still in the grips of the coldest Arctic Blast in memory may seem weird, but remember we are talking "global warming" and that's never meant it would warm equally over the entire planet.

Our weather is the product of a global network of circulating patterns in oceans and well as the atmosphere.  Our climate had reached a fairly stable equilibrium over the past ten thousand years.  What has changed is that society has been injecting ever greater quantities of Greenhouse Gases into our thin atmosphere, this in turn has been the equivalent of donning ever more sweaters on a warm day.

This in turn has added more heat to our planet's virtually closed climate system.  Add heat and energy to a closed system and it will be energized to a higher activity state.  Of course, weather patterns are complex and we don't understand all the ways this higher energy state will manifest itself - but we can be sure those changes will damage a society that has never had to contend with non-stop extreme weather events, be they deep freezes or extended heat waves and drought conditions.


We do know that both Northern Hemisphere Jet Streams have been migrating north and becoming prone to more meandering and sometimes even looping back on itself, or getting temporarily stuck.

For instance, the current cold snap is the result of a "polar vortex" where the jet stream makes exaggerated "meanders" disrupting the air mass over the North Pole and shoving it down to us.  Here's a view of what's happening: 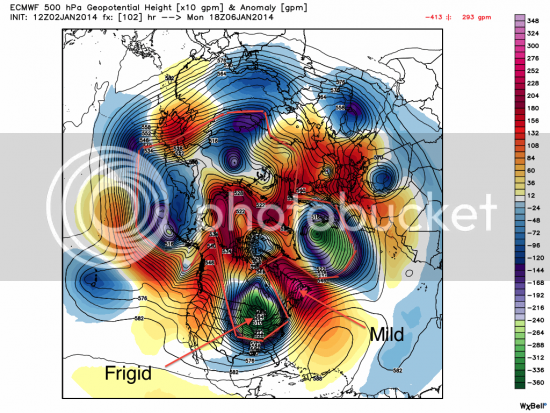 Check out the story and video at: http://www.dailykos.com/story/2014/01/05/1267317/-Polar-Vortex-Jet-Streams-Stratospheric-Warming-events-Rossby-Waves-and-Arctic-Blasts#
Here's another interesting collection of information:
"It’s Cold and My Car is Buried in Snow. Is Global Warming Really Happening?"
http://www.ucsusa.org/global_warming/science_and_impacts/science/cold-snow-climate-change.html

~ ~ ~ ~ ~ ~ ~ ~ ~ ~ ~ ~ ~ ~ ~ ~
Now that the introduction is out of the way it's time for the main course.  A Repost of a SkepticalScience.com article from March of 2013 that reviews published findings which make it clear, our planet continues to retain heat at alarming rates, and all the hand waving, distracts and denial don't change that basic reality.
http://www.skepticalscience.com/new-research-confirms-global-warming-has-accelerated.html

Posted on 25 March 2013 by dana1981 A new study of ocean warming has just been published in Geophysical Research Letters by Balmaseda, Trenberth, and Källén (2013).  There are several important conclusions which can be drawn from this paper. Completely…

Posted by citizenschallenge at 7:30 AM