I'll admit, regarding my little SFSU/Steele project, recently I've spent a lot of time spinning my wheels.  Seems no one wants to get close to the touchy question of professors/instructors having a duty to honestly represent the scientific work of others.

Apparently outright lying about the work of scientists is considered a sacred part of the academic process.  I still can't get my mind around that logic.  Admittedly I'm on the outside of academia looking in, so if anyone within the process would care to correct me or enlighten my interpretation please (If not here at WUWTW, how about an independent venue).  After all, constructive learning is what this is supposed to be all about.

What I find even less comprehensible:
How is it that maliciously slandering honest professional scientists falls under the same acceptance?  Or is it a blind eye?

So I've gone back to reviewing and learning some more while pondering the fundamental requirements for a constructive* rational debate - as opposed to the politicians lawyerly debate to win at all costs regardless of fidelity to the truth.

I have to wonder what the hell, has all of modern society accepted the myth that the best liar deserves to win?

In any event, this morning I saw that Victor Venema (at his consistently thoughtful blog Variable Variability) wrote something that I believe fits right into this series of foundation laying "exhibits" in my continuing "Great CC/Steele Climate Science Debate."

That's why, with a tip of my hat, I share his thoughts in this post.  But first, as learning goes, looking at related links led to other things and I was reminded of the following helpful chart by "Communicating the Science of Climate Change" and their effort to teach climate science communication skills. 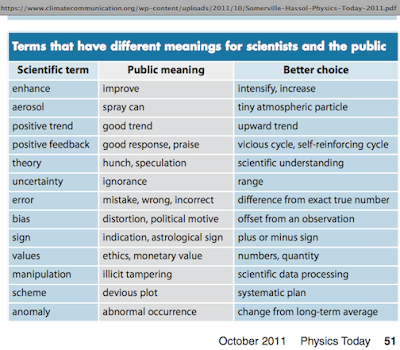 Communicating the science of climate change

It is urgent that climate scientists
improve the ways they convey their findings
to a poorly informed and often indifferent public.

Richard Somerville (http://www.richardsomerville.com) is a professor at the Scripps Institution of Oceanography, University of California, San Diego, and the science director of Climate Communication, a nonprofit project based in Boulder, Colorado (ClimateCommunication.org). Susan Joy Hassol, who works with climate scientists to communicate what they know to policymakers and the public, is the director of Climate Communication.

Over the past half century, the powerful new science of climate and climate change has come into being. Research during that period has settled a fundamental climate question that had challenged scientists since the 19th century: Will human beings, by adding carbon dioxide and other heat-trapping gases to the atmosphere, significantly affect climate? The answer, debated for decades, is now known to be yes. Scientists now understand clearly that humankind is no longer a passive spectator at the great pageant of climate change. They have established that the climate is indeed warming and that human activities are the main cause. Every year brings thousands more research papers containing new knowledge of the many aspects of climate change.

Climate researchers know that the case for human-induced climate change has become stronger, more compelling, and increasingly urgent with each passing year. Yet in some countries, notably the US, the proportion of the public and policymakers who reject the science has grown. ...

Climatology is a mature science by now:
The basic results have not changed in decades,
the basics are based on natural science, where clear answers are possible, a lot of scientists are involved,
climatology is well networked into the other sciences and colleagues from other disciplines regularly contribute.

In such a situation, I find it perfectly normal for a citizen or politician to respond to outlandish claims of mitigation sceptics with: "Listen chap, you and I are both not qualified to discus such details. For me it is good enough that almost all scientists agree that there is a problem. If you really have a problem with some detail of the science, go write a scientific paper about it, but do not bother me with it." Or for short: "The science is settled".

You will have to search long and hard to find a scientist saying "the science is settled". Mostly because that is not how we scientists think: we are working on trying to improve our understanding and focus on the interesting parts that are not well understood. But when someone claims to have refuted the greenhouse effect, I feel perfectly entitled to say "the science is settled".  … link to continue

Posted by citizenschallenge at 5:24 PM