This is what a scientist sounds like, Dr. Randall on Clouds and such.

In my recent series, "Profiles in Malicious Deception", one of the main characters was the notion that Solar influences and Cosmic Rays somehow control cloud formation via "micro-physical effects".  One Henrik Svensmark and other boosters of this notion go on to claim that clouds are the actual regulators of our planet's temperature, so we need not worry about the gigatons of CO2 we keep adding to our planet's atmospheric carbon cycle at ever faster pace.

It's quite irrational thinking, full of ignored non sequiturs and supported by nothing more than an absolutist self-certainty and ridicule towards all attempts at constructive debate, dialogue, or education.

I'd always intended to follow up with a good YouTube lecture of a scientist explaining the basics about clouds and their role in our global heat and moisture distribution engine.  It took some effort to find and a while to finish my notes, it was worth it, since it makes a heck of a contrast to 1000frolly's presumptuous, insult dripping approach to explaining science.  This man I enjoyed listening to.  Taking notes was an enlightening process rather than the drag 1000frolly's video was.  I've included my notes under his video.
This is what a scientist sounds like.

1:06 - Professor David Randall - Thanks very much for the introduction and for the invitation.  I'm very happy to be here.

The climate system does what it does because it's heated.

There's a pattern of heating and cooling if you change the heating, you change the climate and this is basically why we expect a climate change in response to increasing greenhouse gases.

4:50 - Increasing CO2 perturbs the Earth's radiation budget:
Considering what happens if there are no feedbacks.
Describing the math.

12:25 -  Given this very simple physical picture it would be very surprising if we didn't see any warming up of the climate, you'd wonder why not.

12:50 - Top Ten Things You Need To Know About Climate Models

23:05 - #7) Testing the Models
Component-level tests
Weather forecasting
Simulation of the current climate
Simulation of past climates

30:55 -  The question is, has a climate model ever made a demonstrably successful prediction?

"The Effects of Doubling the CO2 Concentration on the Climate of a General Circulation Model"  -  Manabe and Wetherald | January 1975
http://kiwi.atmos.colostate.edu/group/dave/at745/Manabe_Wetherald.75.pdf

Abstract
"An attempt is made to estimate the temperature changes resulting from doubling the present CO2 concentration by the use of a simplified three-dimensional general circulation model. This model contains the following simplications: a limited computational domain, an idealized topography, no beat transport by ocean currents, and fixed cloudiness.

Despite these limitations, the results from this computation yield some indication of how the increase of CO2 concentration may affect the distribution of temperature in the atmosphere. It is shown that the CO2 increase raises the temperature of the model troposphere, whereas it lowers that of the model stratosphere. The tropospheric warming is somewhat larger than that expected from a radiative-convective equilibrium model.

In particular, the increase of surface temperature in higher latitudes is magnified due to the recession of the snow boundary and the thermal stability of the lower troposphere which limits convective beating to the lowest layer. It is also shown that the doubling of carbon dioxide significantly increases the intensity of the hydrologic cycle of the model."

In summary, Manabe and Wetherald predicted:
Warming troposphere
Greater warming near the poles
Cooling stratosphere
More rain and higher humidity
All of these things have now happened.

33:00 - Warming in the Arctic is roughly double that from the whole Earth
34:15 - Sea Ice Melting  (decrease faster than predicted)

42:30 - Water vapor feedback
In the tropics the rate of increase of the saturation vapor pressure with temperature is roughly 7 percent per Kelvin.  That's really really fast and it keeps getting steeper.
Water vapor is strong greenhouse gas. . . 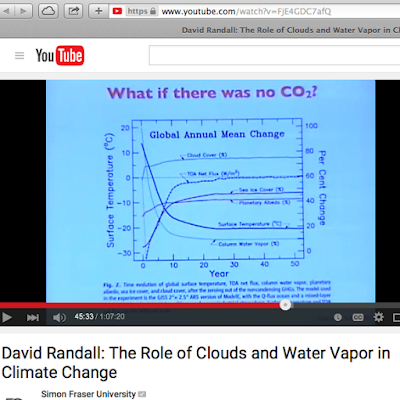 57:55 - Conclusions
The reasons to expect global warming are neither complicated nor controversial.  They can be summarized on the back of an envelope.

Comprehensive climate models have existed for more than 40 years, and are under intensive development at many centers around the world.

The net effect of many feedbacks in the climate system is to amplify the warming, relative to what would occur with no feedback.

Describes variations in low cloud formation with temp change and with geographic change
The logical disconnect between more evaporation and low clouds - that does not hold because of a variety of geophysical factors.

61:20 - Difference between formation of ocean clouds and land clouds?
A lot has to do with temperature variability of land, compared to the ocean's temperature stability (little change between day and night and over great expanses of surface area.)

63:50 - Formation of clouds - influence of the sun and cosmic ray flux?

Clouds are mostly produced because the air is going up.
As the air rises it's moving to lower pressure, it expands adiabatically that causes it to cool, as it cools the saturation vapor pressure goes down.
If you cool it enough condensation begins and a cloud forms.

64:40 - Of course, the cloud droplets are nucleated on aerosols, and the presence of aerosols, charged aerosols in particular can be of interest in this context.  There can be solar influences and cosmic-ray influences on the availability of nuclei on which the cloud particles are formed.  But, down here in the lower atmosphere the presence or absence of clouds is never conditioned by the availability of nuclei.  There is always plenty of nuclei.  The presence or absence of clouds is basically produced by how the air is moving.

It does matter is how the mass is distributed ...

For more information, visit http://at.sfu.ca/YKVBxv
Posted by citizenschallenge at 2:25 PM

This is part of a series:

The follow up.
This is what serious science has to say about that:
This is what a scientist sounds like, Dr. Randall on Clouds and such.