I have a three year old post over at my CC site, "Jerry Mitrovica: The Fingerprints of Sea Level Change... the video" and in the past few days it's received a half dozen comments from one ncdave4life, who disputes Dr. Mitrovica's conclusions with echo-chamber science.  Ncdave's comments are tricky-dick affairs loaded with coding that blossoms when approved and posted.  Since I'm not into those sorts of devious games, and WUWTW is not a billboard for contrarian lies I've kept the rest of his onslaught in moderation until I have the time to review them.  Since today is an unexpected day off I'm going to look at his first comment.

To me his work seems another excellent example of devious rhetoric intent on dumbing down readers, that goes beyond the realm of healthy constructive dialogue and "free speech' and into the realm of malicious mischief that ought to be legally actionable.  I believe this ncdave4life has provided me with excellent examples of "criminal negligent" in action, as argued by Professor Lawrence Torcello' and written about at "Is misinformation about climate science criminally negligent?" - I want to be clear - though I often bring up Professor Torcello's work, this is my independent reading and my arguing his case is totally unaffiliated with the professor's own work.

Furthermore, he fantasizes a struggle going on between plants and animals for available oxygen and CO2 and that society increasing atmospheric CO2 level is a good thing.  Conveniently ignoring the heat issue; and the resultant biosphere disruption; and ocean acidification damaging and disrupting our ocean's food web.  That's the short version, now on to DB's own words:
__________________________________________________

Why do I already sense you are an adept at the art rationalizing?

ncdave:  You asked, “what about predictable weather patterns and their role in producing bumper crops” and the disruption caused by anthropogenic climate change?
The answer is in the data. Thus far there’s no evidence that anthropogenic climate change is causing extreme weather events, or adversely affecting weather patterns in any other way. It certainly hasn’t adversely affected agricultural productivity: 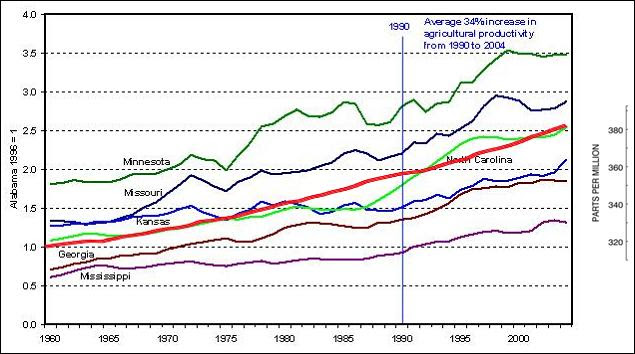 Ncdave4life will you please correct your website and update the information you offer your public?  Following is a more realistic overview of today's situation and please remember we are concerned with the future, not the successes of the past.

For a brief overview of the scope of the situation:

"... Such weather-related crop disasters will become more likely with climate change, warns a detailed report released today by the Global Food Security (GFS) program, a network of public research funding agencies in the United Kingdom. “The risks are serious and should be a cause for concern,” writes David King, the U.K. Foreign Secretary’s Special Representative for Climate Change, in a foreword to the report. ..."
~ ~ ~ ~ ~ ~ ~
Drought and Heat Took a Heavy Toll on Crops, Study Finds
By NICHOLAS ST. FLEUR  |  JAN. 6, 2016
http://www.nytimes.com/2016/01/07/science/study-measures-damage-from-weather-disasters-on-cereal-crops.html

Droughts and heat waves wiped out nearly a tenth of the rice, wheat, corn and other cereal crops in countries hit by extreme weather disasters between 1964 and 2007, according to a new study.

The paper, published Wednesday in Nature, examined data on the effects, over five decades, of extreme temperatures, floods and droughts on national crop harvests.
“People already knew that these extreme weather events had impacts on crop production,” said Navin Ramankutty, a geographer from the University of British Columbia and an author of the report. “But we didn’t know by how much, and we didn’t have a basis for how that might change in the future.”

Dr. Ramankutty and his team combined data from a disaster database with food production information from the United Nations Food and Agriculture Organization. They looked at about 2,800 weather disasters, such as the 1983-1984 drought in Ethiopia and the 2003 European heat wave, along with data on 16 different cereals, including oats, barley, rye and maize, grown in 177 countries. ...
_____________________________________________________
ncdave:  You wrote, “It’s utter malicious nonsense trying to conflate what CO2 does in our atmosphere with it’s biological role.” That’s wrong in two different ways:
1. The fact that you’re unfamiliar with something does not make it “malicious nonsense.” Every word I wrote is true. If you learn more about the climate issue, what you’ll discover is verification of what I wrote.
________________________________
I have been learning about climate issues since the early 70s, more recently for easily two decades I have devoted a good deal of energy listening to skeptical arguments and contrarian fancy talk.  Many times I have suspended my disbelief long enough to understand your(et al.) claims.  But contrarian arguments have consistently fallen short and are easily dismissed based on a rational reading of the full spectrum of available information.

DB, I have already found a number of lies in your story, so please, self-adulation stinks.

I use "malicious" very deliberately to describe a calculated attempt to misrepresent the facts and deliberately misinform the public and leaders about critically important evidence and information.

Then the conversation proceeds to go down hill. The individual was really an anti-vaxer, a creationist, or a climate change denier all along, but was just pretending to be a thoughtful person who never thought about this issue before and just has some innocent question.

David Siegel is one of those individuals, only instead of showing up on a Facebook thread or in the comments section of a blog post, he went to medium.com where anybody can post their thoughts. ..."
~ ~ ~ ~ ~ ~ ~

"Human caused climate change is real, and it is important. It has such monumental implications that governments around the world have been coming together since the 1980s to work out how best to address it. Yet the scientific consensus that we are changing the climate is constantly being challenged by those who have financial or other interests in the continued use of fossil fuels. This has resulted in a “consensus gap” whereby a measurable, though shrinking, proportion of the general public is not sure that anthropogenic climate change is real or important. Unfortunately, this consensus gap allows for those who do not respect the science to parachute in now and then to help maintain a beachhead of denial.

David Siegel recently penned an article at Medium.com in which he tells us he has spent several hours studying the climate change problem, and he has determined that there really isn’t one. The most cursory inspection of his thesis suggests that Siegel has spent most of those hours studying and re-phrasing the anti-science “denialist” rhetoric, readily available on line. Not one of his points, and he has, conveniently, ten of them, is novel, insightful, or in any way different from what we have seen developed by the other fossil-fuel defending organizations and individuals.

ncdave:  2. It is a fundamental error to try to separate what CO2 does in our atmosphere with its biological role. They’re intimately connected.
Have you ever wondered about the high level of free oxygen in the Earth’s atmosphere?

There's is plenty of oxygen in circulation, and there is no 'contest' between oxygen and carbon dioxide.  For a less melodramatic and far more accurate description of how all this works, might I suggest:

Increasing CO2 levels will force plants to evolve new compensation mechanism for not just the higher CO2, but also for other changing environmental factors such as heat and intensified rain/drought patterns.

"Most plants maintain a constant concentration of CO2 in their stomata, the pores through which O2 and CO2 are exchanged and water vapor is lost to the atmosphere. Plants react to increased CO2 availability by partially shutting their stomata, which increases the efficiency with which they use water. In some ecosystems, the increase in water-use efficiency leads to wetter soils (Bremer et al. 1996, Field et al. 1997, Fredeen et al. 1997). In plant communities such as these, alien species that are poised to take advantage of water availability increases could become more abundant. "

Keep increasing CO2 a significant amount and current plants will need to put energy into adapting while a different variety of plants slowly evolve to take advantage of the new conditions, winners and loser, evolution in action and all that.

The biosphere we grew up in was perfectly suited to the condition in existence, pretending otherwise reveals a profound disconnect from comprehending our planet and its processes.