I'm a very small blog.  One man's hobby more than anything else.  Fills my need to share what I find interesting and important about our world and its biosphere, well and to confront shills who lie about climate science.  Somewhere in the past I had dreams of making some sort of impact, but a thinking person can deny the futility for only so long.  Truth be told, I've learned to appreciate I'm basically pissing in the wind.  Now days I think I'm evolving into simply being a 'witness' to what I see unfolding upon our one and only, once fantastic cornucopia, planet Earth.  Since there ain't nothing stopping this train-wreck we're in the midst of.

I bring this up because though I don't trust my "blog numbers" considering spiders and what not being counted.  I do know that once in a while the numbers go crazy.  For instance this past week suddenly Russia was taking a big interest.  I'm pretty sure it wasn't coffee shops full of kids trying to read my suddenly viral articles.

Nah, something is searching my site, not that there's much to find.   Who knows, perhaps someone is getting ready to pull some mischief on me.  The recent headlines wouldn't have anything to do with my dark thoughts, hmmm.  How much do I care, difficult to say anymore.

Why Experts Are Sure Russia Hacked the DNC Emails
By Josh Meyer | July 25, 2016
http://www.nbcnews.com/news/us-news/why-experts-think-russia-hacked-dnc-emails-n616486 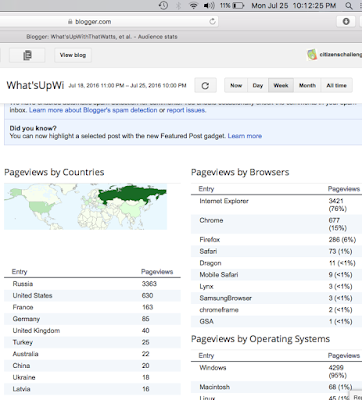 This is an update from Wednesday (July 27th) midday to add the following two screen shots.
Something in Russia is giving my blog-count a heck of a bump, but what's it mean? 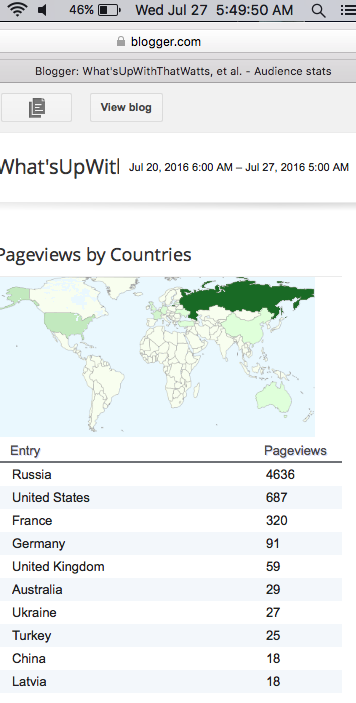 I think I'll continue documenting some of these crazy spikes.
Such a this, which is actually more like last night since posting my latest, than the last 24. 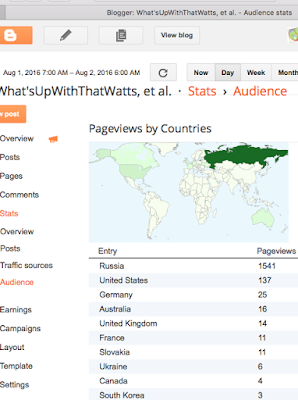 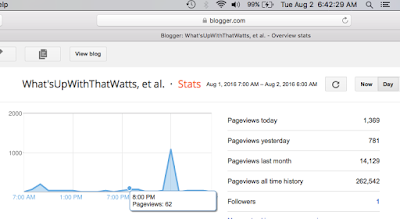 I noticed today that something from Russian has taken a great interest in one of my other blogs citizenschallenge.blogspot.com.  I'm thinking I should be keeping track of these incursions, thus I'm sharing this information. 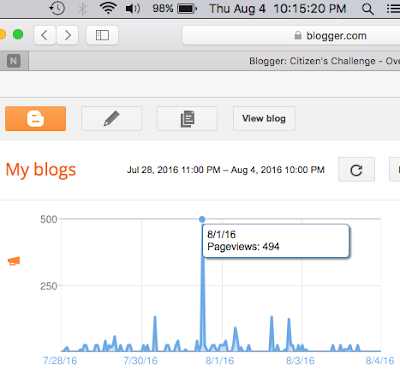 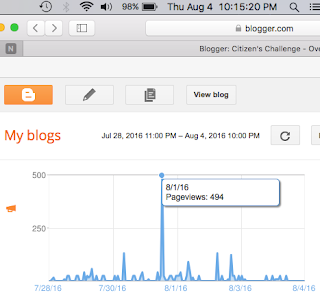 “WASHINGTON — An unusual question is capturing the attention of cyberspecialists, Russia experts and Democratic Party leaders in Philadelphia: Is Vladimir V. Putin trying to meddle in the American presidential election?

Until Friday, that charge, with its eerie suggestion of a Kremlin conspiracy to aid Donald J. Trump, has been only whispered.

But the release on Friday of some 20,000 stolen emails from the Democratic National Committee’s computer servers, many of them embarrassing to Democratic leaders, has intensified discussion of the role of Russian intelligence agencies in disrupting the 2016 campaign. …”

“Proving the source of a cyberattack is notoriously difficult. But researchers have concluded that the national committee was breached by two Russian intelligence agencies, which were the same attackers behind previous Russian cyberoperations at the White House, the State Department and the Joint Chiefs of Staff last year. And metadata from the released emails suggests that the documents passed through Russian computers. Though a hacker claimed responsibility for giving the emails to WikiLeaks, the same agencies are the prime suspects. Whether the thefts were ordered by Mr. Putin, or just carried out by apparatchiks who thought they might please him, is anyone’s guess. …”

Why Experts Are Sure Russia Hacked the DNC Emails
By Josh Meyer | July 25, 2016

Many U.S. officials and cyber security experts in and out of government are convinced that state-sponsored Russian hackers are the ones who stole 20,000 emails from the Democratic National Committee and leaked them to the public just in time to disrupt the Democrats' national convention in Philadelphia.
Here's why the experts are so confident the Russians did it:

• GEOGRAPHY: At least one of the hacker groups attacking the DNC appeared to cease operations on Russian holidays, and its work hours aligned with a Russian time zone, cybersecurity company FireEye concluded in a report.

• FORENSIC EVIDENCE: After a different batch of hacked Democratic emails was released last month, a wide spectrum of cyber-security experts concluded that it was the work of Russian intelligence agencies through previously known proxy groups …

• MOTIVE: Given their mutual and very public bromance, Putin would much prefer a Trump presidency to a Clinton one, and the timing suggests the leak was timed for maximum embarrassment to the Democrats and their presumptive nominee. …

The main reason, however, is that the email hack is exactly the kind of thing Russian hackers can do, are supposed to do, and are used for by Putin and his aides, retired four-star Adm. James Stavridis told NBC News.

Posted by citizenschallenge at 11:01 PM

Hmmm, seems I'm not the only one. I discovered this at the Rabett Run,