This is the third installment (paragraph 3) of this citizen's examination of the article at the heart of this season’s faux climate scandal media sensation the John Bates Affair.  For some background and introduction link here.  I’ve borrowed Bates’ subtitle since I’m exploring his wordsmithing in order to ponder his motivations and it seemed to fit well enough.

Technical infractions of documenting protocols?  Procedures that take years to satisfy and were the source of many contentious meetings between departments and Bates trying to iron out his fastidious (perhaps even obstructionist) red tape with real world needs.  Bates does not share that side of this story.

What’s galling with that sentence is that having read through all this a number of times I already know Bates provides nothing of the sort.  Not a hint of any slight or infraction against Chairman Smith by Dr. Karl.  The NOAA claim perhaps woven between the lines.  The Science Magazine claim amounts to nothing more than another creative and hostile insinuation.  I can’t help but wonder if this wasn’t Judith’s ghostwriting.

Bates ¶14   ... Did Karl et al. disclose to Science Magazine that they would not be following the NOAA archive policy, would not archive the data, and would only provide access to a non-machine readable version only on an FTP server?

Has Dr. Bates stopped beating his wife?  That sort of framing is gratuitous and only good for contriving prejudices.

Bates writes:   I have extensive documentation that provides independent verification of the story below.
___________________________
Not that extensive.  Besides, it’s a contrived hyper-inflated story that he’s peddling.

In an interview with E&E News yesterday, former National Oceanic and Atmospheric Administration principal scientist John Bates had a significantly more nuanced take on the controversy that has swirled since a top House Republican hailed his blog post as proof that the agency "played fast and loose" with temperature data to disprove the theory of a global warming "pause."

Bates accused former colleagues of rushing their research to publication, in defiance of agency protocol. (Bates) specified that he did not believe that they manipulated the data upon which the research relied in any way.

"The issue here is not an issue of tampering with data, but rather really of timing of a release of a paper that had not properly disclosed everything it was," (Bates) said.  (Source Scott Waldman, E&E News)

Bates presents only a sliver of the story.  Here another perspective from someone who worked on the Karl 2015 project, PeterThorne.

The GHCN homogenisation algorithm is fully available to the public and bug fixes documented. The ISTI databank has been led by NOAA NCEI but involved the work of many international scientists. The databank involves full provenance of all data and all processes and code are fully documented. The paper describing the databank was held by the journal for almost a year (accepted October 2013, published September 2014) to allow the additional NOAA internal review processes to complete.

The ERSSTv4 analysis also has been published in no fewer than three papers. It also went through internal review and approval processes including a public beta release prior to its release which occurred prior to Karl et al., 2015.

I’m no expert, but it seems like stacking the deck against Dr. Karl.  Another question, why has only the Karl study been singled out?  There were other papers that used less than Bates’ optimally archived and certified FOC data.

Finally consider Bates' process, it's not what could be called straightforward.  Some in the know consider it an example of too much of a good thing.  This comes from Bates' paper:

The CDR program has adopted a two-phase transition approach—commonly used in the U.S. Department of Defense programs and elsewhere—to providing full operational capabilities. The first phase, or initial operational capability (IOC), is achieved when a CDR meets minimal requirements for product generation, description, archiving, and stewardship. This corresponds to levels 3 and 4 of maturity.

The second phase, or transition to full operational capability (FOC), is achieved when a CDR may be independently generated in operations without reliance on the original investigator and meets all maturity requirements of description, archiving, and stewardship (levels 5 and 6 of maturity)." 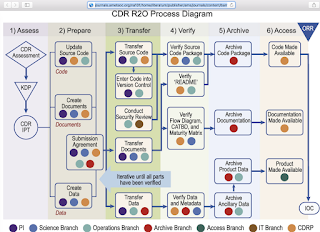 Thorough, not thoroughly fabricated: The truth about global temperature data
How thermometer and satellite data is adjusted and why it must be done.

We're just taking the temperature—how hard can it be?

So how do scientists build datasets that track the temperature of the entire globe? That story is defined by problems. On land, our data comes from weather stations, and there’s a reason they are called weather stations rather than climate stations. They were built, operated, and maintained only to monitor daily weather, not to track gradual trends over decades. Lots of changes that can muck up the long-term record, like moving the weather station or swapping out its instruments, were made without hesitation in the past. Such actions simply didn’t matter for weather measurements.

The impacts of those changes are mixed in with the climate signal you’re after. And knowing that, it’s hard to argue that you shouldn’t work to remove the non-climatic factors. In fact, removing these sorts of background influences is a common task in science. …


Current and Former NOAA And NASA Officials Issued Harsh Rebuttals To Daily Mail. Climate Nexus compiled reaction to Rose’s Daily Mail article from several past and present officials with NOAA and NASA, including:


• James Hansen, former Director of NASA-GISS: “This is another case of making a mountain out of an anthill, while not telling the public that it is an anthill. The misimpression, that there might be a substantial flaw in climate change analyses, was predictable and surely was realized and even encouraged by those who brought forth this attack. The only censure should be on the heads of those who pretend that there is some significant new revelation and those who aid in the promulgation of this falsehood.”


• Rt. Rear Admiral David Titley, former NOAA chief operating officer: “In summary, the Mail on Sunday has found a disgruntled ex-NOAA employee and is using him to construct alternative facts about the climate. Unfortunately for all of us, the air will keep warming, the seas will keep rising, and the ice will keep melting, regardless of the Daily Mail's fanciful claims and accusations. The real atmosphere is impervious to alternative facts.”

• Jane Lubchenco, former NOAA administrator: “These are sad, old accusations that have been definitively disproven. The accusations are a blatant attempt to sow confusion and doubt with the goal of distracting folks and undermining the global momentum to reduce carbon emissions. ... Definitive studies by other authors have independently and conclusively verified Karl et al.’s findings. I know that NOAA has robust scientific checks and balances. Its scientists are widely recognized as outstanding and its high standards and procedures ensure that its products are rigorous and of the highest quality. Moreover, there is a refreshing openness to multiple points of view and possible interpretations, but in the end, conclusions are based on data, rigorous analysis, and are subject to peer-review.” [Climate Nexus, accessed 2/6/17]

¶1 A look behind the curtain of John Bates’ facade - The John Bates Affair
http://whatsupwiththatwatts.blogspot.com/2017/03/1-behind-curtain-of-bates-facade.html

¶2 A look behind the curtain of John Bates’ facade
http://whatsupwiththatwatts.blogspot.com/2017/03/2-behind-curtain-of-bates-facade.html

To be continued as time permits - life's been busy and I needed to step back take a break anyways.  Still I've got my copy of Bates' article, the man has much to answer for and I do intend to return to my dissection when I can.
Posted by citizenschallenge at 1:31 PM

No problem with your use of anything of mine from the ATTP thread or my own site !
(grin)