Published on Dec 5, 2014 by the Guy Science
https://www.youtube.com/watch?v=6VUPIX7yEOM

Neil DeGrasse Tyson reveals the causes of man-made Climate Change in a simple way through Carl Sagan, easy to follow explanations, and stunning visual models. He creates an intuitive understanding of humanity's damaging influence on both the environment and on our civilization's future.
~~~~~~~~~~~~~~~~~~~~~~~~~~~~~~~~~~~~~~~~~~~~
1959
https://www.scientificamerican.com/article/carbon-dioxide-and-climate/ 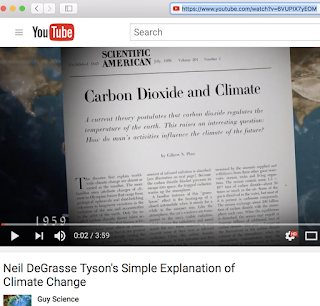 An article from our July 1959 issue examined climate change: “A current theory postulates that carbon dioxide regulates the temperature of the earth. This raises an interesting question: How do Man’s activities influence the climate of the future?”
... So long as the total amount of carbon dioxide in the atmosphere-ocean system does not change, such a cycle of temperature oscillation will tend to repeat itself. The period of the complete cycle would be determined primarily by the time required for an ice sheet to form, grow to maximum size and melt away. Estimates indicate that this should take about 50,000 years, in agreement with the observed time for the cycle.  ...
During the past century a new geological force has begun to exert its effect upon the carbon dioxide equilibrium of the earth [see graphs on page 43]. By burning fossil fuels man dumps approximately six billion tons of carbon dioxide into the atmosphere each year. His agricultural activities release two billion tons more. ...
~~~~~~~~~~~~~~~~~~~~~~~~~~~~~~~~~~~~~~~~~~~~
1975
http://www.fas.harvard.edu/~eps5/writing_assignment/CLIMATE_BKGD/broecker_science_1975.pdf Wallace Broecker was among the first climate scientists to use simple climate models to predict future global temperature changes.
Broecker anticipated the actual increase in CO2 very closely, predicting 373 ppm in 2000 and 403 ppm in 2010 (actual values were 369 and 390 ppm, respectively). Broecker also used an equilibrium climate sensitivity of 3°C for doubled CO2; however, his model’s transient climate sensitivity worked out to be 2.4°C for doubled CO2. 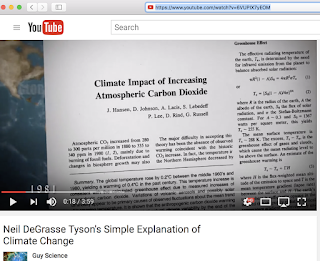 A paper published in the journal Science in August 1981 made several projections regarding future climate change and anthropogenic global warming based on manmade CO2 emissions. As it turns out, the authors’  projections have proven to be rather accurate — and their future is now our present. ...
The paper, written by a team of atmospheric physicists led by James Hansen at NASA’s Institute for Space Studies at Goddard Space Flight Center ...
Even though the paper was given 10 pages in Science, it covers a lot of advanced topics related to climate — indicating the level of knowledge known about climate science even at that time.
“The concepts and conclusions have not changed all that much,” van Oldenborgh and Haarsma note. “Hansen et al clearly indicate what was well known (all of which still stands today) and what was uncertain.”
Within the paper, several graphs note the growth of atmospheric carbon dioxide, both naturally occurring and manmade, and projected a future rise based on the continued use of fossil fuels by humans. Van Oldenborgh and Haarsma overlaid data gathered by NASA and KNMI in recent years and found that the projections made by Hansen et al. were pretty much spot-on.
(http://www.realclimate.org/index.php/archives/2012/04/evaluating-a-1981-temperature-projection/#bib_1)
~~~~~~~~~~~~~~~~~~~~~~~~~~~~~~~~~~~~~~~~~~~~ 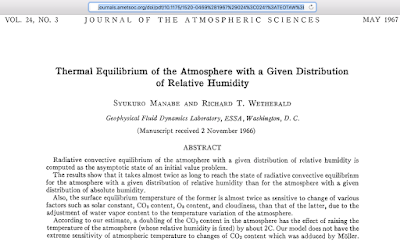 http://journals.ametsoc.org/doi/pdf/10.1175/1520-0469%281967%29024%3C0241%3ATEOTAW%3E2.0.CO%3B2
Modeling the Earth’s climate is one of the most daunting, complicated tasks out there. ... In fact, if you google “climate models wrong”, eight of the first ten results showcase failure. But headlines are never as reliable as going to the scientific source itself, and the ultimate source, in this case, is the first accurate climate model ever: by Syukuro Manabe and Richard T. Wetherald.
50 years after their groundbreaking 1967 paper, the science can be robustly evaluated, and they got almost everything exactly right.
The big advance of Manabe and Wetherald’s work was to model not just the feedbacks but the interrelationships between the different components that contribute to the Earth’s temperature. As the atmospheric contents change, so do both the absolute and relative humidity, which impacts cloud cover, water vapor content and cycling/convection of the atmosphere. What they found is that if you start with a stable initial state—roughly what Earth experienced for thousands of years prior to the start of the industrial revolution—you can tinker with one component (like CO2) and model how everything else evolves. ...
~~~~~~~~~~~~~~~~~~~~~~~~~~~~~~~~~~~~~~~~~~~~

John Stanley (J.S.) Sawyer was a British meteorologist born in 1916. He was elected a Fellow of the Royal Society in 1962, and was also a Fellow of the Meteorological Society and the organization's president from 1963 to 1965.
A paper authored by Sawyer and published in the journal Nature in 1972 reveals how much climate scientists knew about the fundamental workings of the global climate over 40 years ago. For example, Sawyer predicted how much average global surface temperatures would warm by the year 2000.

"The increase of 25% CO2 expected by the end of the century therefore corresponds to an increase of 0.6°C in the world temperature – an amount somewhat greater than the climatic variation of recent centuries."

Remarkably, between the years 1850 and 2000, atmospheric carbon dioxide levels did increase by very close to 25 percent, and global average surface temperatures also increased by just about 0.6°C during that time.
Sawyer also discussed several other important aspects of the Earth's climate in his paper. For example, he addressed the myth and misunderstanding that as a trace gas in the atmosphere, it may seem natural to assume that rising levels of carbon dioxide don't have much impact on the climate. Sawyer wrote,

"Nevertheless, there are certain minor constituents of the atmosphere which have a particularly significant effect in determining the world climate. They do this by their influence on the transmission of heat through the atmosphere by radiation. Carbon dioxide, water vapour and ozone all play such a role, and the quantities of these substances are not so much greater than the products of human endeavour that the possibilities of man-made influences may be dismissed out of hand."

One for the road

You've probably heard that carbon dioxide is warming the Earth. But how exactly is it doing it? Lieven Scheire uses a rainbow, a light bulb and a bit of quantum physics to describe the science behind global warming.

And a night cap.  Consider where our fundamental understanding came from to begin with:

The Discovery of Global Warming