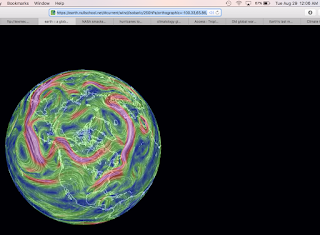 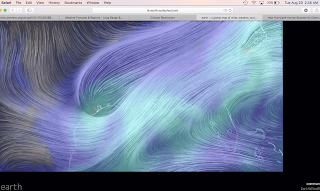 
“The 12 year drought of major hurricane landfalls in the U.S. is over, with catastrophic impacts in Texas.  Predictions of Hurricane Harvey illustrate the realization of extended- and long-range hurricane forecasts.

This blog post analyzes the forecasts of Hurricane Harvey made by my company Climate Forecast Applications Network (CFAN), and also by the National Hurricane Center. …”

CC - Curry does what she promises, but it’s basically a ginned up professorial review of how the models and forecasts unfolded, nothing particularly insightful.  The take-away message, forecasting has improved a great deal and we need to continue improving it.

But then, suddenly we get this tidbit:

I’m sure you won’t be surprised to hear people blaming Harvey on global warming.  How unusual was Harvey?

Here she presents a list of Cat 4-5 landfalling hurricanes by
Phil Klotzbach, the list is based on wind speed and barometric pressure.  Like a gymnastics judge who only looks at an athlete's legs to the exclusion of the rest of her body.

Curry seems to think that Wind and Pressure intensity is all we need know.  On this list Harvey Ranks tied for 14th place.  Judith what about damage inflicted?

While there was a large amount of water vapor ingested into Harvey, the huge amounts of rain are associated with Harvey’s stalled movement, while still close enough to the Gulf to continue to suck in moisture.”
~ ~ ~ ~ ~ ~ ~

How can such an “acclaimed” climate expert in good conscience leave out the Jet Stream connection which explains why Hurricane Harvey stalled and did that loop, (as predicted by the experts)?

But don’t take my word for it.

As the arctic warms up, the difference in temperature between the equator and the north pole lessens. This lower temperature gradient also means a decrease in the energy which drives the jet stream through its movements. Less energy means less movement, and the jet stream slows down.

Air-flows act in this way the same as water. The more energy a river has, the straighter its path. But when jet streams slow down, they meander, like rivers on open plains.

“That’s energy being dissipated through these meanders,” White explained. “As you slow air down, it gets loopier.”  One of the effects of loopier jet streams is that they can curve far enough around and cut themselves off, which is also seen in river systems.

... In conclusion, while we cannot say climate change “caused” Hurricane Harvey
(that is an ill-posed question),  we can say is that it exacerbated several characteristics of the storm in a way that greatly increased the risk of damage and loss of life.

Sadly this is for real, tragically misguided characters such as our Judith Curry continue to grossly misrepresent the full scope of climate science understanding regarding this immensely complex subject.  Our global heat and moisture distribution engine follows straight forward and consistent and understandable rules, but it requires curiosity, intellectual honesty and some serious good-faith homework.

Most news stories that I’ve read regarding the AGW Harvey connection are a muddle of partial facts presented through the contrarian script that’s dedicate to distancing, if not ignoring, geophysical connects that actually do clearly explain why all this is happening.  Once again, the big four, though the connections certainly don't stop there.


* Global warming is definitely directly related to that hot Gulf of Mexico waters that fed an explosive intensification of a tropical storm.


It all comes down to how serious one is about the questions one wants answered.

It is absolutely disconnected (and disingenuous) to ask :
“Is Harvey caused by manmade global warming?”

Of course it isn’t, so what!

It’s the physical characteristics of Harvey that are being intensified by our warming world, and that's going to kick us in the as$.

For me its been demoralizing watching reporters and scientists continuing to soft peddle the clearly understood connections by posing stupid questions that receive inevitably stupid answers.

Incidentally, about that terminology game.  Can we please start being clear:  Manmade global warming is what’s driving increasing climate change.

For those that want to focus on the facts might I suggest some informative videos:

A key idea in climate science is that the system contains multiple feedback loops, that can make warming worse.

Posted by citizenschallenge at 1:26 AM


Sounds like an idea someone with no clue of the situation could come up it.

I challenge you to define the outline for this "study" you believe makes sense.

Real science is about building on what you DO KNOW - not about playing games with al the tiny detailsl we don't know.
Although the paid climate science contrarian crowd sure has been hitting home run in mass hypnosis with the strategy.

To follow up on that silly comment by Anonymous - what we do know. (Or first aim, then shoot.)

A History of Global Warming, In Just 35 Seconds

History of the greenhouse effect and global warming By S.M. Enzler MSc
http://www.lenntech.com/greenhouse-effect/global-warming-history.htm

To finish, Anonymous is a perfect example of something I mentioned in the above post: