A comet, the Universe and me.

I managed not to hear about comet Neowise in the western sky until two evenings ago after I arrived back at our home in Colorado.  When it got dark my wife took me outside to look at it.  Later during Maddy’s last walk of the day, we gazed at it a few more minutes, than retired to a good night sleep, after my rare nearly non-stop drive home from Phoenix. 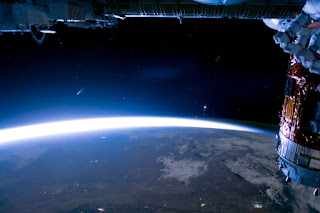 From our 7,300' perch, we have splendid "Dark Skies" - (Though there are the glowing domes of surrounding towns off in the distance, heck if meteorological conditions are just right we can see the very distant glow above Gallup, NM some 130 straight arrow miles away and a thousand feet lower.)
Last night we looked at it again, and then before bed I stepped outside for another look before turning in. But sleep didn't come, instead I was dreaming of tasting more of that night sky, so I snuck out of bed leaving my wife and Maddy behind and returned to the night.
With my naked eyes it was a hazy spot and smudge, but with the binoculars it took on size, brightness and details.  Quite a beautiful comet.  As a bonus the background took on oodles of stars and galaxies not visible to my naked eyes.

After so much looking at the comet I fell into an old past time from decades ago.  Comparing naked eye viewing with binocular viewing.  It was too late for an old time game, during early twilight it can be fun to use binoculars to find familiar constellations before they appear to your unaided eyes.  Then we watched for the first glimmer of those stars to come into view as pinpoints of light resolve into familiar constellations.
Playing this game allowed my senses, along with my Mind's Eye, to get into the depth of space.  Since I do know the fundamentals of astronomy looking at the night sky is a three, nay four, dimensional visceral thing for me.  With substance and layers of depth.

Then I started imagining the three dimensional reality of that distant comet moving past earth and the field of stars, heading towards the backside of the sun, which was way distant and a little below the horizon, as Neowise’s vapor cone is blown out and away from the sun.  With a bit of gazing and mediating, that awareness become a visceral thing inside of me.
Earlier when I'd stepped out and watched through the binoculars I was astounded to actually perceptibly watch the comet moving against a background star, in particular a pair of stars, right in its path.  They were quite close together and invisible to my eyes alone.  I just watched in amazement, taking it in as Neowise was moving on towards one star in it’s path.  My mind was racing in all sorts of directions trying to absorb the moment as much as possible.
I took a break and looked again and that apparent motion wasn't happening.  Now I only saw the one star, no second star, still I was left wondering if the other star was simply being blocked by the cone trailing the comet.
It was part of the reason I wanted to go back outside, to take another viewing after some time elapsed, even if barely an hour
Alas, it looked the same, no second star reappearing.  Worse, I couldn't discern the gap between my apparently lone star and the comet having closed any.  Meaning the early movement I saw was some aberration.
So it goes.  It's an example of seeing something that would be wonderful to believe really happened, I mean how cool to actually sense the movement of a comet, the way I can the moon over the course of a long evening when there's a well placed star to act as a milepost.
But, the commitment to honesty requires full spectrum skepticism, meaning testing my imagination to the best of my objective abilities, which I did.   The evidence revealed that what I thought I saw, could not have been what I wanted it to be.  A) no second star reappeared  B) the distance to my other star had not discernibly shorted.  That's that.  The other star must have been some moving object that I lost track of because I was focused on the main event.  Heck I was free handing binoculars with 65 year old hands, all sorts of optical reflections flying around.
Having resolved that, the night sky beckoned my attention.  All told I saw three shooting stars, and two satellites, along with a couple jets, and one brilliant Milky Way over head.

That brilliant night sky reminded me that it was among the biggest reasons I loved hitchhiking cross-country decades ago. Get out and far away from cities.  Finding myself in the middle of nowhere Kansas, or Texas, Colorado, etc, as the night unfolded.
Having the awareness of standing on the edge, on top of this Earth of ours, often seeming wilderness all around me and nothing but the universe all above me.  All night long, and then the joy and warmth of the sun’s first rays.  Those are things worth tasting, worth experiencing.  In ’70/’80 American, I could walk back to road or freeway and stick out my thumb and get a ride.  Those were the days indeed.
Staring up at the Milky Way and constellations, the moon and all the rest out there above the dark land.  Just the sky.  It's not that difficult to imagine oneself on the edge of this Earthly orb flying through space and being connected to all that's out there.  With just a much fathomless depth going on inside of my body, down to my cells and molecules and so on.  Dancing on a sword’s edge.
;-)  I haven’t been called the Cosmic Cowboy for nothing - I transcended the looking at postcards phase of awareness and learned enough to step inside the image and strive to appreciate the reality beyond my own ego driven needs.  It's a personal tragedy that my experiences seems to have been so rare.

Last night for a few moments I could touch those youthful days and the invigorating wonder of it all.  To appreciate Earth as an entity through time and space and evolution's cascade, to appreciate all of that genuinely flowing through my own veins.
I’m sad I never did a better job of conveying that wonder.  I tried, I could have done more, but I did plenty, might have done a whole lot less.
Never connecting with that team I needed, no wind beneath my wings and all that, though now looking at the reality of today in 2020 it seems such a team never existed to begin with.
Seems that life and circumstance and my choices constantly pulled me away, not from the living and musing and wonder and trying to make sense of me and my world experience, but from totally focused writing about it.  Still, I’m sure I could have been part of a kick ass team of provocative constructive critique against our slow descent into the current Alt-right world of belligerent self-delusion that is being funded and manipulated by a few ruthless sociopathic oligarchs.  So that's that and we move on.

I have a visceral appreciation for this planet as a living, thriving, evolving organism and me as an intimate part of it.  An awareness that empowers a healthy constructive perspective and an appreciation that makes nurturing our biosphere and protecting our children’s future a self-evident top priority.  An ethic that demands honestly on all sides and that condemns deliberate fraud.
What’s my point here?  Not much, just jibber-jabbering and I guess a desire to share what’s accumulated inside of me before I’m gone.  And I simply wanted to get it off my chest.  Fortunately, I'm plenty compensated for by the wonderful people and good fortune within my life and times up to and including today.  So don't read too much into my pissy writer's discontent.     ;-)
Posted by citizenschallenge at 2:49 PM