Republican Dependence on Demonizing. Why?

I saw a video today that's worth sharing and this seems as good a spot to insert it as any.
June 28th I read a letter to the editor that continues haunting my thoughts. Jeff begins his letter on a humorous note, “We have a national outbreak of leftism sweeping our country.”  Don’t I wish. Then it quickly turns ugly, claiming we “threaten to kill our democracy and way of life.”

Leftism is Jeff’s pejorative for Liberal.  Ironically, “Life, Liberty, and the Pursuit of Happiness” is about as Leftist as it gets!  America’s founders were children of the intellectual enlightenment, they believed in evidence over personal fancy and dogma. 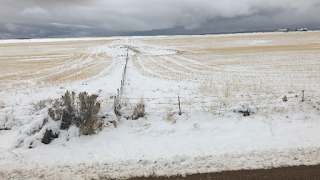 God was beyond their understanding and they believed in Providence.  They trusted the scientific approach to better understanding, based on honestly assessing and debating the facts.  All that is tremendously “Leftist” and liberal, and the stuff of American greatness and patriotism!

Some will say, ah but the Founders meant “Land” - they hid that sentiment behind a general community “Happiness” for political expediency.  Okay, there we have it!  America’s divide, the self anointed Masters vs. We The People, the right vs. the left.

American society has succeeded because
both sides needed the other, but even more importantly because we were living in a land of plenty.  When things got bad we moved onto new horizons for new opportunities to exploit.

Jeff’s next sentences describe liberals in extremes that can only be classed as hysterical flailing.  It left me wondering why such desperation to create extreme delusions and fabricate mortal enemies?  We are Americans, we need each other to keep ourselves honest.  United we stand, divided we fall.

We are entering a difficult period in human existence.  The right wing feels superior and hates the left, but what do they have to show for themselves?

Adoration of a President who lies incessantly, hates reading and learning, refuses to imagine he’s capable of mistakes, hates experts, and worst, salving his ego and receiving adulation are the most important concerns within his mind.

This fabricated fanciful right-wing hatred and fear can only lead to self-destruction for USA.

Sunday, June 28, 2020, Durango Herald Letter to the Editor by Jeff B.
https://durangoherald.com/articles/329857-letters-leftism-more-dangerous-than-covid19

Jeff writes:
Symptoms of leftism include: hating America; feeling justified in rioting, looting, stealing and killing of innocent people in the name of social justice; expressing hate against the police who are sworn to serve and protect the innocent and defenseless; feeling the urge to tear down statues of famous historical figures such as Christopher Columbus; feeling hate for white people who you think are all racist; accusing anyone who is not in support of the radical policies of Black Lives Matter and antifa of being racist; shutting down free speech; doxing anyone who dares to speak out against the radical mob; and having the urge to bend the knee in front of an angry mob of looters, rioters and white haters to express your sins of being a racist even if you are not.
If you have any or perhaps all of these symptoms, then you have caught the disease of leftism.
The only known cure is to tune out CNN and all other forms of leftist propaganda media and start to think for yourself.
After trashing the left, Jeff goes after Black lives and White lives and reflects what generations worth of entitled superiority being threatened looks like.

Without a hint of irony he finishes:  "The only known cure is to tune out CNN and all other forms of leftist propaganda media and start to think for yourself."

CNN, always with the CNN.  What up?  So I did a bit of web surfing and discovered CNN and trump have had a blood feud going on, since like forever.  Oh and one with FOX, surprise, surprise.

Now, let’s consider the double standards.  What about the extremist FOX juggernaut which has evolved into more propaganda machine than news outlet?  FOX where executives dictate what the news will be..

No news agency has ever crossed the line between reporting and playing power-politics the way FOX has.  Just saying.  In American we used to have an accepted principle of Fair Play, perhaps more in spirit than reality, still it has been tragic witnessing that die from our political arena.
Posted by citizenschallenge at 7:21 AM