Mr. Anthony Watts, What's up with You?


This morning I received an email telling me I should take a look at WUWT since I've received an honorable mention.

Proprietor: unknown at this time, goes by the name “citizenschallenge” in Durango, Colorado.
Some of this person’s skills: cut and paste
Reason for creating the blog: unloved at WUWT, multiple policy violations there, assigned to the permanent troll bin.

Obviously Anthony has not read much at this site or at my CitizensChallenge blogspot or he would appreciate that along with sharing {that would be cutting and pasting} valuable authoritative information from experts, I also do a fair amount of original writing.  That he can't manage to figure out my name simply underscores the man's superficiality.

The reason I started these blogs was that I was sick and tired of seeing the climate science denial industry's {of which Anthony Watts is a major spokesperson} strangle hold on Google searches and there simply needed to be more exposure of the valid information folks like Anthony have made a career out of avoiding, misrepresenting, denying and out-yelling.

Mine is a modest effort, but someone(s) have to step up to confront the strategic assault on pragmatic rational learning in order to understand what our society's Grand Geophysical Experiment is doing to our planet and our collective future.  It was nice of Mr. Watts to let me know that my efforts have not been totally in vain.

I find it ironic how easily you label others "Troll" when you are the fellow that attacks every piece of serious climate science news with misdirection, misrepresentation, snotty slander and lies.
You love to feature fellows like the infamous confirmed serial liar Lord Monckton to name but the worst offender.

Among your biggest offenses is that you pretend Earth Sciences are supposed to live up to Engineering Standards - something they never have done and will never be able to do.

Among your biggest talents is to misdirect attention away from core findings and lessons of climate studies and papers by micro-focusing on inconsequential minutia and then disingenuously hyper-inflating flaws {that have usually already been acknowledged in the literature} way beyond any justification.

Also, your talent for misrepresenting what climatologists have actually said is contemptible.

Among your biggest weaknesses is your refusal to be the least bit self-skeptical of your own judgements and believing that economic interests are more important than honestly understanding what's happening upon this planet and ignoring the dangers of continued inaction on GHG emissions.
Pretending that untrained lay-people with Republican agenda's know more than trained experts.
And now that decades worth of inaction have locked-in a good three decades worth of continued warming and infrastructure damaging extreme weather events, you continue to advocate for inaction. 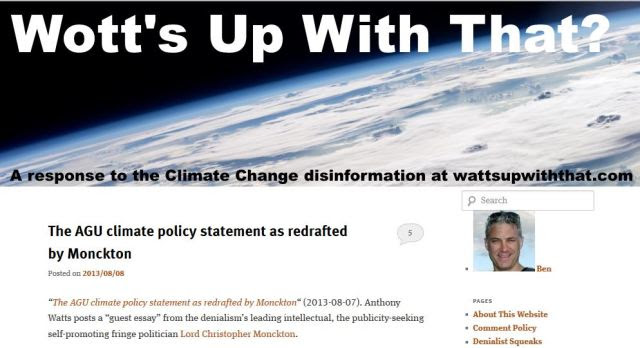 Since this blog is about sharing valid climate science information, I should also mention what might well be the best blog so far as making the actual climate science available to the lay-audience in a clear understandable manner.

Posted by citizenschallenge at 11:14 AM

It was nice of Mr. Watts to let me know that my efforts have not been totally in vain.

Yes, I agree. I use twitter to let people know when I've put up a new article. It's good that Anthony's decided that if he can't beat us, he'll give us some free advertising.

For those not familiar with Sou please check out her website
http://blog.hotwhopper.com

Here's an insightful reality check for our Mr. Anthony Watts.
I found at
http://wottsupwiththatblog.wordpress.com/2013/08/24/watt-about-the-blog-spawn/

Perhaps a more important metric than the most viewed anti-science blog is the most cited papers in the most respected journals.

Great Blog CC. The more people like you who highlight the errors at WUWT, the better.

Sorry Rachel, I should have noticed that right away.

And a big thank you for your compliment.