No global warming since 1999? Nah, here's the smoking gun.

One of the problems with trying to convince climate science 'skeptics' that the missing surface temperature (heat) was going into the oceans, was that scientists could not yet show exactly where that heat was going.  That was because of a lack of observational capability, which scientists have been doing their best to fill in with the ARGO system of floats.

Global warming seems to have paused over the past 15 years while the deep ocean takes the heat instead. The thermal capacity of the oceans far exceeds that of the atmosphere, so the oceans can store up to 90% of the heat buildup caused by increased concentrations of greenhouse gases such as carbon dioxide. Chen and Tung used observational data to trace the pathways of recent ocean heating. They conclude that the deep Atlantic and Southern Oceans, but not the Pacific, have absorbed the excess heat that would otherwise have fueled continued warming.
Science, this issue p. 897
Update… and now there's this:


Rising Ocean Temperature: Is the Pacific Ocean Calling the Shots?


Following rapid warming in the late 20th century, this century has so far seen surprisingly little increase in the average temperature at the Earth’s surface. At first this was a blip, then a trend, then a puzzle for the climate science community.
... New research from the University of Washington shows that the heat absent from the surface is plunging deep in the north and south Atlantic Ocean, and is part of a naturally occurring cycle. The study is published Aug. 22 in Science.
Subsurface ocean warming explains why global average air temperatures have flatlined since 1999, despite greenhouse gases trapping more solar heat at the Earth’s surface.
The results show that a slow-moving current in the Atlantic, which carries heat between the two poles, sped up earlier this century to draw heat down almost a mile (1,500 meters). ...
{…}
Tung and co-author Xianyao Chen of the Ocean University of China, who was a UW visiting professor last year, used recent observations of deep-sea temperatures from Argo floats that sample the water down to 6,500 feet (2,000 meters) depth, as well as older oceanographic measurements and computer reconstructions. Results show an increase in heat sinking around 1999, when the rapid warming of the 20th century stopped.
“There are recurrent cycles that are salinity-driven that can store heat deep in the Atlantic and Southern oceans,” Tung said. “After 30 years of rapid warming in the warm phase, now it’s time for the cool phase.”
Rapid warming in the last two and a half decades of the 20th century, they proposed in an earlier study, was roughly half due to global warming and half to the natural Atlantic Ocean cycle that kept more heat near the surface. When observations show the ocean cycle flipped, in about 2000, the current began to draw heat deeper into the ocean, working to counteract human-driven warming. …
For the rest of the story, visit http://www.washington.edu/news/2014/08/21/cause-of-global-warming-hiatus-found-deep-in-the-atlantic-ocean/
~ ~ ~ ~ ~ ~ ~ ~ ~ ~ ~ ~ ~
PS.

Here's another reality check, this time from down under:

About the State of the Climate report

Weather and climate touch all aspects of Australian life. What we experience here at home is part of the global climate system. The Bureau of Meteorology and CSIRO contribute significantly to the international effort of weather and climate monitoring, forecasting and research. In State of the Climate, we discuss the long-term trends in Australia’s climate.
This is our third biennial State of the Climate report. As with our earlier reports, we focus primarily on climate observations and monitoring carried out by the Bureau of Meteorology and CSIRO in the Australian region, as well as on future climate scenarios. 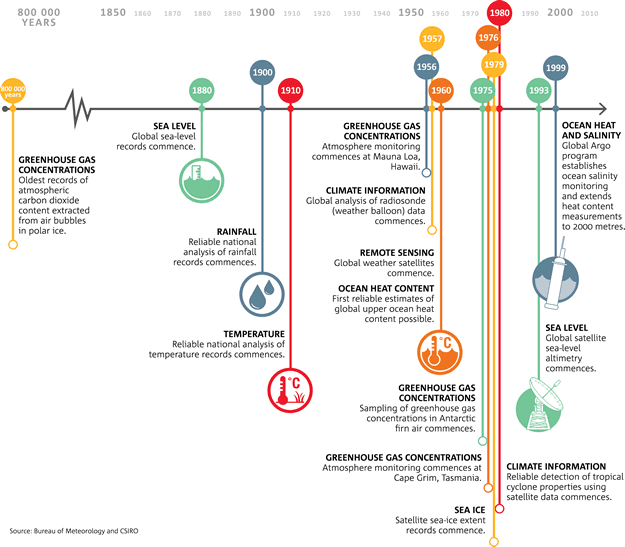 Report at a glance

Data and analysis from the Bureau of Meteorology and CSIRO show further warming of the atmosphere and oceans in the Australian region, as is happening globally. This change is occurring against the background of high climate variability, but the signal is clear.
Air and ocean temperatures across Australia are now, on average, almost a degree Celsius warmer than they were in 1910, with most of the warming occurring since 1950. This warming has seen Australia experiencing more warm weather and extreme heat, and fewer cool extremes. There has been an increase in extreme fire weather, and a longer fire season, across large parts of Australia.
Rainfall averaged across all of Australia has slightly increased since 1900. Since 1970, there have been large increases in annual rainfall in the northwest and decreases in the southwest. Autumn and early winter rainfall has mostly been below average in the southeast since 1990.
Atmospheric greenhouse gas concentrations continue to rise and continued emissions will cause further warming over this century. Limiting the magnitude of future climate change requires large and sustained net global reductions in greenhouse gases.
~ ~ ~ ~ ~ ~ ~ ~ ~ ~ ~ ~ ~
Of course the big question is where do we go from here?
That's a tough one, all I know is that nothing constructive can happen so long as most of our business and political leaders and media tycoons continue pretending they can ignore the evidence and pretend it's not happening…
~ ~ ~

Looking for a better understanding about how our climate system operates?  I've listed a few excellent videos - for those interested in learning about our one and only home planet:

http://whatsupwiththatwatts.blogspot.com/2014/03/global-warming-hiatus-globalheatengine.html
Posted by citizenschallenge at 9:02 PM