A virtual debate with Jim Steele based on his interview at Heartland Institute:

Steele:  "And we trust the scientific theory because it been fairly tested by others - the theory must out perform all alternate explanations, eliminate confounding factors plus lively debate.  But, what I was finding was the scientific process was being defiled when scientists refused to debate in public. ... and any attempt to prevent that debate, in our schools, in the media, in peer reviewed science, it's only denigrating the scientific process.  ... And I think those public debates would help create real climate literacy …"

Well then Mr. Steele, let's have our Great Global Warming Science Debate.  I will accept these responses from your Heartland Institute podcast as your opening round.  I'll offer my rebuttals, evidence and questions.  I agree to post your thoughtful responses unaltered.

In this post I'm going back to the beginning of what will be a long journey.  (Gotta hand it to you Jim, you know how to pack in a lot of talk into a short period of time.)  The Heartland audio track doesn't have a time signature so I can't offer the start point.  Basically this continues where part one ended.

In this third installment I'll be debating your claim that "global average temperature is a totally meaningless concept" and your claim that scientists are leaving information out of their studies, where I demonstrate that you are... how shall we say, misrepresenting the truth.

Steele:  So I know changes in the eco-system can't be reduced to simple changes like CO2,


Steele:  and an ecologist knows also that a global average temperature is totally meaningless.

Think about the concept of our "global heat and moisture distribution engine" to appreciate what our climate is all about.  That system is composed of ocean, atmosphere, cryosphere and land mass, it possesses a real amount of heat.

Arriving at that number is exceedingly difficult and it requires various teams working independently and in cooperation to establish that number.  The number may not be absolutely perfect, but the thing it's trying to measure most certainly is a very real thing - and it's an important indicator of our planet's energy state, even if we don't fully understand it or it's implications.
______________________________


Steele:  You have to examine the local change.It might be wise to say globally, but all organisms act locally, always. And the changes in local micro-climates are by far more critical measurements.

Wildlife changes?  Climate change indicators?  If I examine the local conditions of parched California right now what will it tell me Mr. Steele?  Other than alarm drifting into fear.


Steele:  So, understanding this I realized it was local landscape changes, it was more, ah, natural cycles that were effecting areas that were driving a lot of the changes that I was seeing.

~ ~ ~ ~ ~
You don't get specific about what "changes" nor what "natural cycles" - nor how much those natural cycles might be influenced by the global warming trend.


Steele:  But oddly researcher were writing papers about the extirpation of butterflies in California by Camille Parmesan who went on to work for the IPCC.
Or a Pika a little mountain rabbit type creature that was evidence of global warming, even though none of those papers looked at local temperatures, they were just looked at global, which seemed like a total disregard for what we have good science for.

~ ~ ~ ~ ~
What's with the "extirpation?"  Dr. Parmesan's study was a meta population study that looked at range shift, nothing about "extirpation" of butterflies beyond local range changes!

Regarding the Pika, it took no time at all to find a couple Pika studies disputing your claim in that regard.

#4  Adult survival across the entire site was positively correlated to the Pacific Decadal Oscillation (PDO) with a time lag of 1 year, and was uncorrelated to adult density. The PDO was negatively correlated to the timing of spring snowmelt at our site, implicating the importance of earlier spring conditions and plant phenology on the subsequent winter survival of adults and therefore, population growth.
#5  When subpopulations were analysed separately, survivals and fertilities were variously correlated to lagged PDO and adult densities, but the patterns varied spatially. Therefore, the mechanisms underlying V(λ) can vary substantially over relatively short distances.

Contemporary climate change alters the pace and drivers of extinction

Here, we use fine-scale distributional records developed over the past Century, combined with spatially comprehensive microclimatic data, to demonstrate a dramatic shift in the range of a climate-sensitive mammal and to infer the increasingly important role of climate in local extinctions of this species across a 38.2 million-ha area. Changes in the distribution of the American pika (Ochotona princeps) throughout the Great Basin ecoregion were characterized using records from 1898–2008, revealing a nearly five-fold increase in the rate of local extinction and an 11-fold increase in the rate of upslope range retraction during the last ten years, compared with during the 20th Century.


Steele:  It was bad science and I tried to replicate Parmesan's paper - which was one of the more iconic papers on global change.  But contrary to what we teach students in science that every paper should have a good method section, so you can replicate and independently test what they're saying.  She had no method section, what I tried to replicate her studies so I asked for her data she refused to give it to me - so that sort of heightened my suspicion and pushed me towards investigating this whole climate catastrophe suggestions that were going on and pushed me further into writing this book.

~ ~ ~ ~ ~
As it happens, I have a copy of Dr. Parmesan's paper and there certainly is a method section and I have the screenshot to prove it !

As for replicating her study, it was a wildlife study in time, you can't go back and replicate those sorts of studies like they were some bench top chemistry experiment.  She tried to explain that to you.  Mr. Steele, why do you play such nasty games of gotcha?

From reading that short paper I know that Dr. Parmesan doesn't claim half as much as you imply.  She also seems to anticipate that games would be played with such studies and suggested a constructive way forward.  Here's the closing of her study, followed by a screenshot of the supposedly nonexistent Method Section, followed by couple easy videos for your further edification.

"Thus, it is unlikely that the observed latitudinal cline in net extinctions was caused by differences in initial population isolation or subsequent land-use changes.  This result, in conjunction with earlier detailed studies of climate-caused population extinctions in this butterfly, suggest climate change as the cause of the observed range shift.

However, conclusive evidence for or against the existence of the predicted biological effects of climate change will come, not from attempts to analyse all possible confounding variables in single studies such as this one, but from replication of this type of study with additional taxa in other regions.  Until this has been done, the evidence presented here provides the clearest indication to date that global climate warming is already influencing species' distribution." 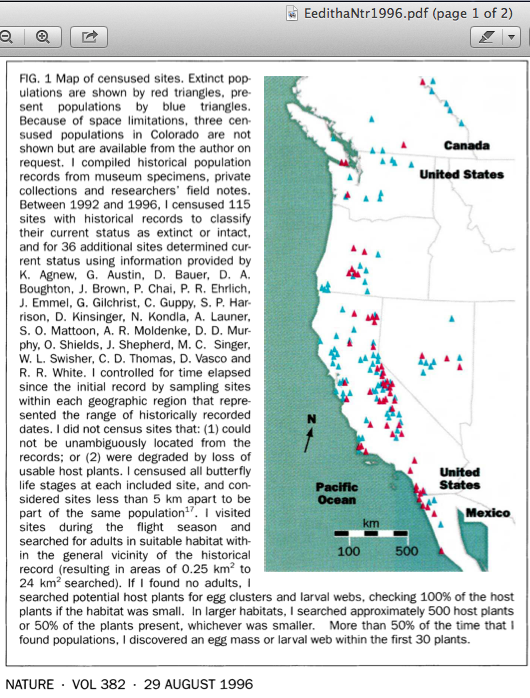 Posted by citizenschallenge at 10:52 PM

And from Mr Steele?


And from Mr. Steele still crickets…

Well except I have discovered he's written some posts about me within the safety of his blog. Which does not allow for comments.

Not surprisingly they skirt my questions.

Eventually I will reproduce those blogposts over here and have a serious look at them. But first onto attempting to get through to San Francisco State University which seems to have circled its wagons, and like Mr. Steele, is doing their best to ignore my inquires about the need for instructors to show fidelity to honestly representing the known science.