A virtual debate with Jim Steele, based on his interview at Heartland Institute:

Well then Mr. Steele, let's have our Great Global Warming Science Debate.
I will accept these responses from your Heartland Institute podcast as your opening round.  I'll offer my rebuttals, evidence and questions.  I agree to post your thoughtful responses unaltered. (Though it's looking like you're going to do your best to hide and ignore these critiques of your self-certain claims. Your silence will serve to expose your hypocrisy and inability to defend your statements on an even playing field.)

In this eighth installment I'm debating your denigration of a biology study led by Dr.Kyle Cavanaugh about Mangrove response to freezing temperatures.

Since I do check first sources I've exchanged a few emails with Dr. Cavanaugh.  I will share some quotes, so he can speak for himself.

It makes another wonderful case study for 'THIS IS WHAT A SCIENTIST SOUNDS LIKE."  Dr. Cavanaugh offered a straight-forward learning experience that I could build on with further research.  Quite the contrast to your constant trickery and contrived gotcha's.

Steele:  Another example, last year NPR and a few media was hyping that Florida's mangroves were marching north because of global warming.

~ ~ ~ ~ ~
I've listen to that NPR story numerous times, there is nothing "hyped" about it - it was a crisp concise report of the known science and a pretty good description of a couple recent studies of mangrove biology.

Mr. Steele, I challenge you to attempt a critique.  Take the time to listen to NPR's three minute report.
Detail what you believe is misleading about Christopher Joyce's reporting.
http://www.npr.org/2013/12/31/258699479/floridas-mangroves-move-north-as-temperatures-rise)

Steele:  The red mangroves that declined earlier was because Floridians removed or trimming trees that blocked their water front views. There were black mangroves that suffered because to control mosquitoes they were artificially flooding swamps to greater depths that would drown out the mangroves.

~ ~ ~ ~ ~
I thought there were three major species and asked Dr. Cavanaugh about it, indeed there are.  Curious… Jim why only discuss two?

More important, he pointed out that you are correct about what you say, but that it doesn't relate to their study.  A non sequitur so to speak.

Dr. Cavanaugh: "Yes, there are three main species of mangroves in Florida: red (R. mangle), black (A. germinans), and white (L. racemosa). I agree with Mr. Steele that coastal development and mosquito impoundments (http://www.sms.si.edu/irlspec/Impoundments.htm) have historically had a big impact on mangroves in Florida.

However, most of those buildings and impoundments are still there, and I don't think these things are responsible for the recent mangrove expansion that we have seen.

We are seeing mangroves move into areas that have been salt marsh for at least 50 years. In some of these locations no one remembers mangroves ever being there. We have linked this expansion to a decrease in the frequency of extreme cold events. Again, I can't conclusively attribute those temperature changes to anthropogenic climate change, but our results suggest that future warming due to climate change will cause further northward expansion of mangroves in Florida."

Jim what's the deal, are you thinking that development and conservation efforts operate outside of the global climate system?

Steele:  So the study that began (1984) after a freeze (1983) that decimated a bunch of mangroves and they looked at how they were coming back and said oh look global warming is forcing them to march northward (¿What about 1985?).

~ ~ ~ ~ ~
Actually this study certainly did take an epic hard freeze event into account... and to a level of detail and complexity well beyond your grade school description.


"... Coastal areas across Florida experienced a decrease in mangrove area after a hard freeze during the winter of 1989 to 1990 (Fig. 2). Recovery from this freeze event was variable in space, but, on regional scales, mangrove area in all of the 0.25° latitudinal bands recovered to pre-1989 levels within 9 yr. 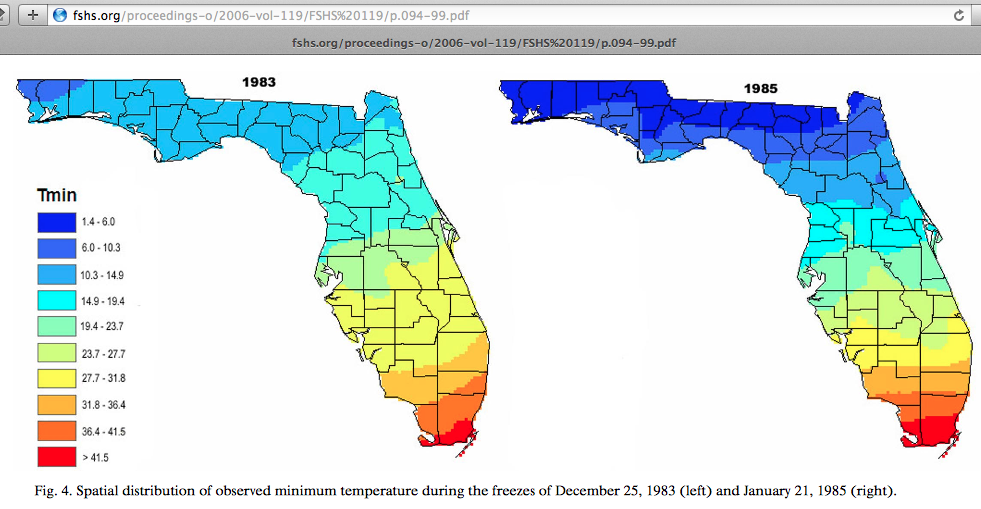 Jim what is the point of ignoring (¿denying?) Florida's documented temperature trend? 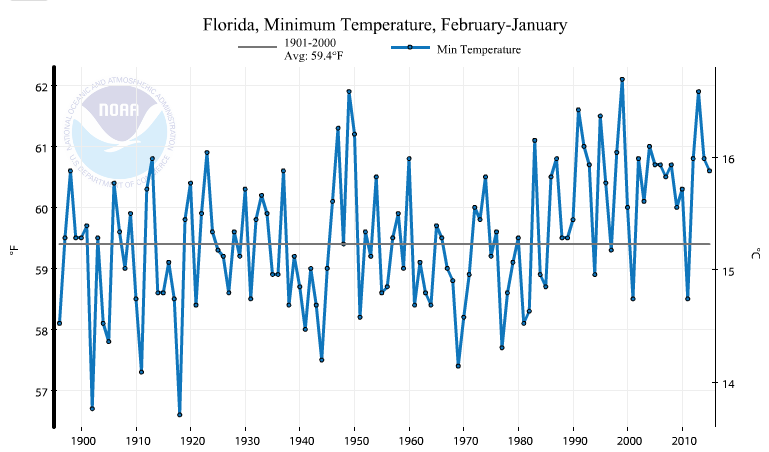 Steele:  And everybody hyped that.

Steele: But the truth was they were recovering due to conservation efforts.

~ ~ ~ ~ ~
"They" is conveniently vague, but in essence this is more non-sequitur reasoning.  Successful conservation efforts, plenty wonderful though they are, are irrelevant to that study!  As Dr. Cavanaugh wrote:

"The conservation efforts Mr. Steele mentions in his blog would not have lead to the widespread, landscape scale expansion of mangroves we documented. These types of efforts might have local impacts, but they wouldn't have regional impacts. The projects Mr. Steele mentions are local projects and are not even located in the areas where we saw the largest expansion of mangroves.

Jim, it's beyond ironic that you write highfalutin stuff such as: "good science demands that all confounding factors be discussed" but, you feel okay with misrepresenting this study and telling your audience that it claims stuff that it does not claim.

* You mislead by introducing this contrived development and conservation angle - even though their study was about specific dynamics, in specific areas removed from those impacts.

* You talk about the study as though it's about Florida mangrove recovery, when it's not.  Once again, it was studying a specific environmental response within specific study areas, intended to better understanding mangrove biology in a warming world.  Another building block of understanding.

* Your most malicious - and perhaps actionable offense - is the way you weave your story to make it sound like all these researchers and scientists are deviously trying to "push" some preordained message.

Jim, what about weighting all the evidence and allowing the facts to force one's understanding and 'beliefs'?

Steele:  They were recovering from a natural freeze cycle that had nothing to do with global warming, but I would have people saying, well ha, what about the mangroves, that proof of global warming.  And all that hype kind of continues.

"Finally as pointed out by Dr. Roger Pielke, the mangroves were decimated by extensive freezes in 1983. Much of the contrast between present and past canopy that Cavanaugh's paper attributed to global warming was an artifact of the canopy's recovery from the 1984 freeze. Staring their trend in 1984, the year immediately after the big freeze skewed the data.  To appreciate just how misleading Cavanaugh's interpretation was, ... "

You include this splendid twist of the knife:


"Good science demands that all confounding factors be discussed and evaluated but in these days of climate fear, all a study needs to do is uncritically blame CO2 for any change."

Please explain why you feel justified ignoring the 1985 and 1989 freezes?

Oh and Jim, do you recognize any trends in these graphs? 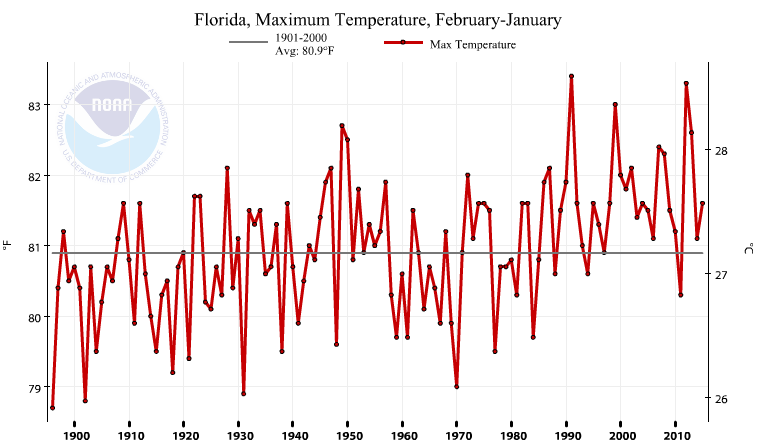 Here are a few quotes from the Cavanaugh, et. al 2013 study, although the complete version is much more interesting, check it out:

Posted by citizenschallenge at 7:05 PM