The goal of this series of posts is to share my own journey of fascinating discoveries that have helped me gain a realistic appreciation for this Earth I inhabit and the climate system that governs the biosphere all of us depend on.  I do this because too many faith-based people have totally disconnected from physical reality, they believe that the constructions of their imaginations have more power that the geophysical reality outside our abodes.  This has led to disastrous choices on many different levels.

If there's any hope to be found in the future it will come from individuals rediscovering the real physical planet we inhabit and honestly assessing how our society and it's runaway population have impacted our planet's biosphere and our future prospects.

In the first post I shared the NOVA/PBS/NASA video "Earth From Space" which gave a nice overview of our dynamic planet and the incredibly complex web of connections that go into creating our biosphere.  Since I'm convinced an understanding of evolution is key to appreciating the world we inhabit, I'm beginning with some fundamental evolution stories.

I intended to start my review with our atmosphere's evolution, but in working on that post I realized there's an even more fundamental evolution to consider.  In this post will take it down to basic building blocks, namely a lecture given by Dr. Robert Hazen: "The Story of Earth: How Life and Rocks Co-Evolved".

Incidentally many of the posts in this series will simply be an embedded excellent lecture by a leading authority followed by my time-signature notes on the lecture and further information for the curious and I will keep my opining to a minimum.

You can find the lecture notes and information regarding Dr. Robert M. Hazen and his work below this video.

The story of Earth is a 4.5-billion-year saga of dramatic transformations, driven by physical, chemical, and—based on a fascinating growing body of evidence—biological processes. The co-evolution of life and rocks, the new paradigm that frames this lecture, unfolds in an irreversible sequence of evolutionary stages. Each stage re-sculpted our planet's surface, each introduced new planetary processes and phenomena, and each inexorably paved the way for the next. This grand and intertwined tale of Earth's living and non-living spheres is only now coming into focus.

Sequential changes of terrestrial planets and moons are best preserved in their rich mineralogical record. "Mineral evolution," the study of our planet's diversifying near-surface environment, began with a dozen different mineral species that formed in the cooling envelopes of exploding stars. Dust and gas from those stars clumped together to form our stellar nebula, the nebula formed the Sun and countless planetesimals, and alteration of planetesimals by water and heat resulted in the approximately 250 minerals found today in meteorites that fall to Earth.

Following Earth's growth and separation into the core, mantle, and crust, mineral evolution progressed by a sequence of chemical and physical processes, which led to perhaps 1500 mineral species. According to some origin-of-life scenarios, a planet must evolve through at least some of these stages of chemical processing as a prerequisite for life. Once life emerged, mineralogy and biology co-evolved, as changes in the chemistry of oceans and atmosphere dramatically increased Earth's mineral diversity to the almost 5000 species known today.

{The one that rocked the world's population - I remember, I was there.} 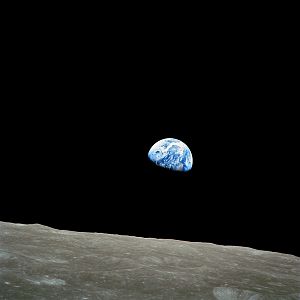 https://en.wikipedia.org/wiki/Earthrise
{Only to have it's profundity fade away and forgotten as our primal greed and selfishness quickly regained it's hold on our collective imagination.} 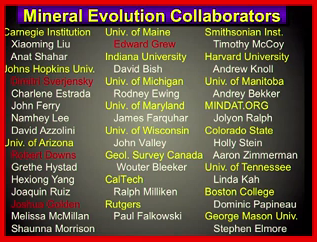 10:00 - How do minerals form?  New minerals form through a combination of chemical, physical, and biological processes.

10:15 - Dr. Hazen takes a moment to comment on his use of the term "evolution" in the context of minerals.
The word evolution has several meanings
Change over time such as Norman Bowen's (1929) "Evolution of the Igneous Rocks"
Implications of complexification
Congruency
BUT, it is not Darwinian evolution! 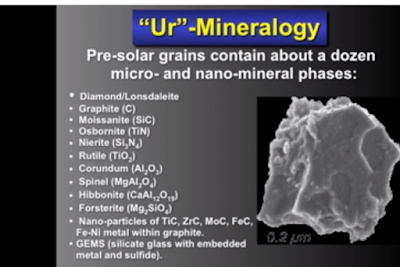 22:45 - Earth's chemical and physical processes resulted in up to 1,500 different mineral species.  How did we get to almost 5,000 mineral species on Earth today?
The answer is life.

22:55 - Origin of life ~4 billion years ago required some minimal degree of mineral evolution.

26:00 - Hypothesis: Approximately 2/3rds of all known mineral species cannot form in an anoxic environment.  Most known minerals are thus a consequence of biological activity. 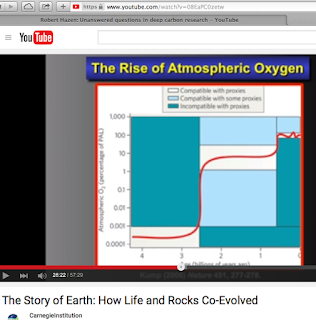 27:15 - What was the oxygen level in the Archean Eon?
Hematite, Magnetite - buffered system -

27:45 - With no oxygen during Archean Eon, what minerals could form?
Iron, carbonate - FeCO3 - Siderite

30:55 - Stages 6-10: Co-evolution of geosphere + biosphere >4,600 mineral species
"Changes in Earth's atmospheric composition at ~2.4 to 2.2 billion years ago represent the single most significant factor in our planet's mineralogical diversity."

31:30 - Considering difference between surface and subsurface evolution
Underground hydrology - evidence within Mo & Re in Molybdenite

34:00 - "Hypothesis: There was a protracted "Great Subsurface Oxidation Interval" that postdate the GOE by a billion years.  This interval was the single most significant factor in Earth's mineralogical diversification."

34:45 - Be Mineral Evolution - Grew, Hazen (2009)
Things going on subsurface that were not happening at the surface.

38:40 - Formation of soils - fossilized in Rhynie Chert ~0.410 million years ago
Earth's terrestrial surface before >0.45 million years ago was barren.
(note: It was a world sculpted only by tectonics, tides, winds, gravity, and temperature.)

40:30 - Recent Conclusions
Previously unrecognized patterns in the distribution of minerals through Earth history reflect:
* Metal ore formation and the supercontinent cycle
* Changing ocean chemistry
* The rise of the terrestrial biosphere

41:00 - drifting plates and 5 Supercontinent Cycles
Evidence - The distribution of zircon crystal through time correlates with the supercontinent cycle over the past 3 billion years. - Condie, Aster (2010) - Hawkesworth et al. (2010)

Explaining why zircon is a such a reliable time keeper.

"Zircon Recrystallization History as a Function of the U-Content and Its Geochronologic Implications: Empirical Facts on Zircons from Romanian Carpathians and Dobrogea"
Ioan Coriolan Balintoni and Constantin Balica (2012)
http://cdn.intechopen.com/pdfs-wm/30908.pdf)

42:00 - Mercury (Hg) minerals - Hazen et al. (2012) - but why the gap? -
Why the spike? (that occurs at the same time as maximum coal deposition.)
Mercury and other heavy minerals loosely bind to coal during formation.

43:40 - Mercury minerals and the rise of the Terrestrial Biosphere

44:00 - Conclusions: Earth has transformed repeatedly evolving over the 4.5 billion years, and it continues to change today.  Life and rocks have co-evolved as a consequence of many positively and negative feedbacks.

Robert M. Hazen, research scientist at the Carnegie Institution of Washington’s Geophysical Laboratory and Clarence Robinson Professor of Earth Science at George Mason University, received the B.S. and S.M. in geology at the Massachusetts Institute of Technology (1971), and the Ph.D. at Harvard University in earth science (1975). After studies as NATO Postdoctoral Fellow at Cambridge University in England, he joined the Carnegie Institution’s research effort.

Hazen is author of more than 350 articles and 20 books on science, history, and music. A Fellow of the American Association for the Advancement of Science, he has received the Mineralogical Society of America Award (1982), the American Chemical Society Ipatieff Prize (1986), the ASCAP Deems Taylor Award (1989), the Educational Press Association Award (1992), the Elizabeth Wood Science Writing Award (1998), and the Distinguished Public Service Medal of the Mineralogical Society of America (2009).

He has presented numerous named lectures at universities, and is currently Sigma Xi Distinguished Lecturer (2008-2010). He served as Distinguished Lecturer for the Mineralogical Society of America, and is a Past President of the Society. Hazen’s recent research focuses on the role of minerals in the origin of life, including such processes as mineral-catalyzed organic synthesis and the selective adsorption of organic molecules on mineral surfaces. He has also developed a new approach to mineralogy, called “mineral evolution,” which explores the co-evolution of the geo- and biospheres.

Joy of Science
Robert M. Hazen
This course provides a clear and bracing overview of the entire scientific world from the laws of motion first formulated 300 years ago by Sir Isaac Newton to the latest marvels of contemporary genetic research. These lucid, information-packed lectures convey the excitement of scientific discovery and trace the connections between discoveries over time. Veteran science educator Professor Robert Hazen renders the...


Four billion years ago, the infant Earth was a seething cauldron of erupting volcanoes, raining meteors, and hot noxious gases, totally devoid of life. But a relatively short time later-100 million to 200 million years-the planet was teeming with primitive organisms. What happened? Professor Robert M. Hazen, one of the nation's foremost science educators and a leader of a NASA-supported team that is studying the…

Thursday, January 14, 2016
{3} Evolution of Carbon and our biosphere - Professor Hazen focuses on the element Carbon
http://whatsupwiththatwatts.blogspot.com/2016/01/3-evolution-carbon-biosphere-hazen.html

Saturday, February 6, 2016
{5a} The Most Beautiful Graph on Earth - A. Hessler
http://whatsupwiththatwatts.blogspot.com/2016/02/most-beautiful-graph-on-earth.html

Posted by citizenschallenge at 2:50 PM

hi Robert-
I see we have another common interest besides diamond synthesis !


I've been a fan of Robert Hazen and his ability to explain the exploration of deep evolution for many years.
Glad you liked it Russell.