What I'm doing here is dissecting and documenting the contrarian debate.
I share these experiences because I believe rational students and others who want to communicate serious science and engage in a constructive learning debate, (as opposed to the political circus debate), should become aware of what they are dealing with when trying to rationally dialogue/debate with Republican/libertarian characters as they endlessly parrot their bankrupt jingles and ignore everything you try so hard to explain.

It will help younger students and scientists to be aware that every marginally effective communicator of serious science will find themselves under the sort of malicious venomous attack by dogma driven zealots that I've walked into.  The particulars will be different, but just as disconnected from actual reality.  Oh and yeah, they will toss every descriptive back in your face - though they never show the integrity to actually support their labeling with thoughtful arguments or real world facts.

The thing to realize is that constructively engaging with others seems anathema to the new Republican/libertarian types.  Ridicule, marginalize, demonize seems their only response to challenging facts.  As for learning about what our society and we ourselves are doing to our Earth's biosphere and climate system, which enables that life-support system our society is dependent on - there, confusion and stupefaction is their goal.

Now to the funny, but sick, irony I want to share.

Dave NC-20 Burton, runs to Poptech in order to excitedly complain about how awful I am and that I've deleted his responses.

(Some background on that, I posted NC-20 Burton's first three comments without interfering with his tricky dick coding, which blossomed into cookie cutter spam that had nothing to do with my specific complaints.  Then in an effort to explain to NC-20 Burton what was so irritating and what I would no longer tolerate.  I reproduced the next couple of his rapid fire comments, replacing his objectionable coding with "????", boy did that send the dude ballistic.

Instead of getting the message and recognizing how superficial, devious and unacceptable his method of debate was, he's chosen the cry-baby route, running to his clubhouse to bemoan how horrible he believes I am.)

After reading NC-20 Burton's comment at Poptech, I did an experiment and submitted a comment of my own.  Today I took a look and no surprise, my comment has not appeared.  Apparently, Poptech decided to delete it.  So much for a "debate."


I might point out, if I choose not to publish a comment, I will acknowledge said comment and explain why I've chosen not to publish.  But then, I'm actually into pursuing a constructive dialogue.  Even if I'm not as nicie about it as most would like. 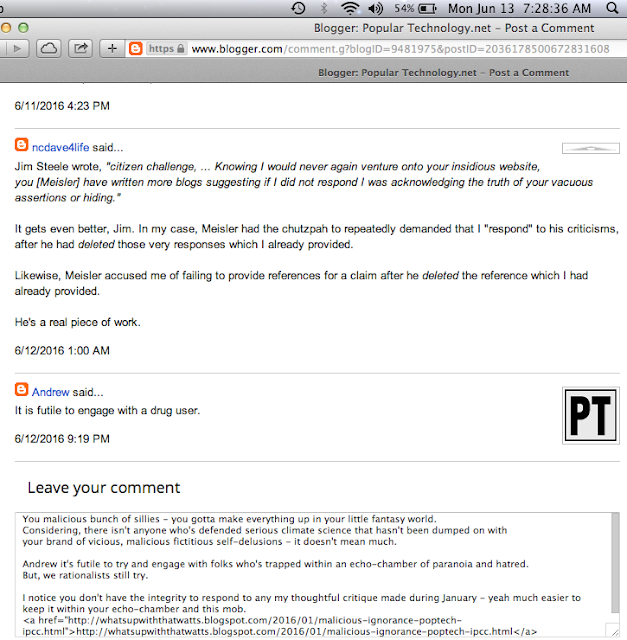 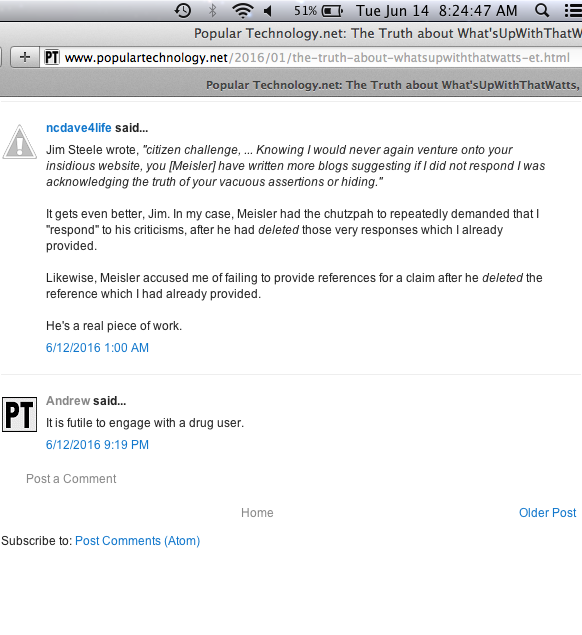 It's even more futile trying to engage with committed fraudsters.
These people have created their own faux reality and they are sticking to it.
But engage we must, if for no other reason than to expose and demonstrate their disingenuous ways to serious rational, science respecting folks.

My last sentence is worth sending out to Mr. Poptech again:

"I notice you don't have the integrity to respond to any
of my thoughtful critique made during January -
yeah much easier to keep it within your echo-chamber and this mob."

Confronting Malicious Ignorance - Poptech, what about this list?
http://whatsupwiththatwatts.blogspot.com/2016/01/malicious-ignorance-poptech-ipcc.html

Whoa Poptech. Your turn to answer some questions.
http://whatsupwiththatwatts.blogspot.com/2016/01/poptech-your-turn-answer-questions.html

"Keep the Debate Alive!" (#7 moral of the comments)
http://whatsupwiththatwatts.blogspot.com/2016/01/keep-debate-alive-moral-of-comments.html

Return of Lord of the Flies (#10…)
http://whatsupwiththatwatts.blogspot.com/2016/02/return-of-lord-of-flies.html

Posted by citizenschallenge at 9:59 AM