Apparently, Jim Steele's What's Natural? column is a weekly affair.  This week he cancelled his promised Changing Sea Levels #2 and instead shares pointers from Carl Sagan in his What's Natural? "The Scientific Baloney Detection Kit" Feb. 20th, Pacific Tribune.  It promises to offers an interesting journey into the mindscape of double standards and blindspots.  I'm limiting this post to his introduction which offered it's own share of talking points.  Then I'll be looking into Sagan's specific points in a later posting.

REPRINTED UNDER PROTECTION OF FAIR USE COPYRIGHT LAWS.
My intention is a point by point review of libertarian deception in action. 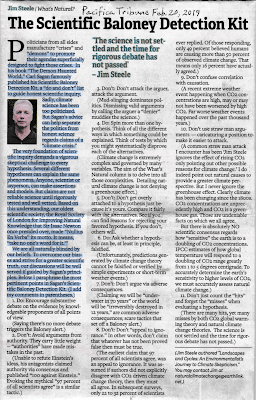 In the book Sagan “aims to explain the scientific method to laypeople, and to encourage people to learn critical and skeptical thinking.” (WIKI)

Serious scientific inquiry is something that only the learned can do.  Of course, one can be self-taught.  But expert status in any field demands, learning, acquiring real knowledge, skills and experience.

Sagan’s advice is for us laypeople to develop some critical thinking skills in order to better recognize our thoughts and what to look for as we assess the various claims being tossed at us.

Beyond that, here again Jim tries to imply that our dysfunctional social media and news networks are the same as the Halls Of Science.  It’s childish projection.

Your average Earth scientist really is different from your profits is everything crowd!  Otherwise, they’d be there.

The world of science is something very different.

Interestingly every climate science “fail” has been brought to the public’s attention through the scientific community and its ongoing public debate that gets covered by a few competent reporters and then discussed among a larger lay audience.
~~~~~~~~~~~~~~~~~~~~~~~~~~~~~~~~~~
"Based on this understanding, our oldest scientific society, the Royal Society of London for Improving Natural knowledge that Sir Isaac Newton once presided over, made "Nullius En Verba" its motto. It means, 'take no one's word for it."'"
~~~~~~~~~~~~~~~~~~~~~~~~~~~~~~~~~~
A while back I had cause to research the term and reached out to a few academics I know and received one response in particular worth sharing.

There have been many attempts to produce a satisfactory translation of the ‘Nullius in verba’ motto. Other contenders have been ‘Not by words alone’, or ‘Take nothing on authority’. None are entirely satisfactory.

Now I quite take your point when you say that: ‘we can’t prove everything to ourselves, I should be able to trust experts and their informed interpretation of the evidence’.  Yes, you can trust the experts.

Bear in mind that the motto isn’t intended for you and I – it is the motto of the Royal Society.

The Society’s Fellows are scientists, precisely the people who do prove things to themselves, their peers (and eventually to the rest of us). When the original natural philosophers who created the Society chose this motto, they were not thinking of a wider public, but only their fellow-scientists within the organization, eg the people conducting and interpreting experiments.

Naturally, the motto doesn’t apply to climate science contrarians either.

I am not blinded by my beliefs, I embrace intellectual challenge and I’ve learned that being caught out on mistakes is a fantastic learning tool, not mortal slashes to my ego.

I know life is about absorbing new information every day and allowing that to form my beliefs.

This is what the libertarian types simply can’t seem to comprehend - that the beauty of learning and better understanding our planet and her story and deep time is worth more than riches to many people.

So, of course, libertarians think everyone’s possessed with their own conniving, opportunistic, underhanded, greed driven tendencies.

We have no time for that poison!  Mistakes are for learning!

We The People of the United States have a moral, ethical, and pragmatic right to learn what scientists have learned about this planet's biosphere and climate engine without constant dishonest crossfire.  We should not tolerate serious scientists constantly being drown out by amoral, ruthless and frankly ignorant arguments - that an astoundingly ruthless GOP PR factory repeats over and over again, without ever learning a damned thing from the evidence in front of us.

Posted by citizenschallenge at 5:31 PM

Thanks, CC. I look forward to the next instalment. As a UK citizen, I don't have to put up with Steele's baloney. Always fascinated by people who favourably compare their thoughts and outlooks to Sagan, Galileo, Newton and Einstien.
Ian