Time for a short break from my virtual dialogue to do a reality check.  There's some interesting news that reflects on the continuing progress of climate scientists in refining their understanding.  It's about a new study who's title says it all. "Observational determination of surface radiative forcing by CO2 from 2000 to 2010" it documents in situ measurements of the atmospheric greenhouse gas effect.

At first I was going to post highlights and a link, but it's such an interesting story there's nothing I want to cut out, or could add, except for highlights.  With a call to Dan Krotz to double check, and a tip of the hat to Seth Borenstein, I'm happy to reproduce the Berkeley Lab's news release in it's entirety.

Scientists have observed an increase in carbon dioxide’s greenhouse effect at the Earth’s surface for the first time. The researchers, led by scientists from the US Department of Energy’s Lawrence Berkeley National Laboratory (Berkeley Lab), measured atmospheric carbon dioxide’s increasing capacity to absorb thermal radiation emitted from the Earth’s surface over an eleven-year period at two locations in North America. They attributed this upward trend to rising CO2 levels from fossil fuel emissions.

The influence of atmospheric CO2 on the balance between incoming energy from the Sun and outgoing heat from the Earth (also called the planet’s energy balance) is well established. But this effect has not been experimentally confirmed outside the laboratory until now. The research is reported Wednesday, Feb. 25, in the advance online publication of the journal Nature (2/25/15).

The results agree with theoretical predictions of the greenhouse effect due to human activity. The research also provides further confirmation that the calculations used in today’s climate models are on track when it comes to representing the impact of CO2.

The scientists measured atmospheric carbon dioxide’s contribution to radiative forcing at two sites, one in Oklahoma and one on the North Slope of Alaska, from 2000 to the end of 2010. Radiative forcing is a measure of how much the planet’s energy balance is perturbed by atmospheric changes. Positive radiative forcing occurs when the Earth absorbs more energy from solar radiation than it emits as thermal radiation back to space. It can be measured at the Earth’s surface or high in the atmosphere. In this research, the scientists focused on the surface.

They found that CO2 was responsible for a significant uptick in radiative forcing at both locations, about two-tenths of a Watt per square meter per decade. They linked this trend to the 22 parts-per-million increase in atmospheric CO2 between 2000 and 2010. Much of this CO2 is from the burning of fossil fuels, according to a modeling system that tracks CO2 sources around the world.

“We see, for the first time in the field, the amplification of the greenhouse effect because there’s more CO2 in the atmosphere to absorb what the Earth emits in response to incoming solar radiation,” says Daniel Feldman, a scientist in Berkeley Lab’s Earth Sciences Division and lead author of the Nature paper.

“Numerous studies show rising atmospheric CO2 concentrations, but our study provides the critical link between those concentrations and the addition of energy to the system, or the greenhouse effect,” Feldman adds.

He conducted the research with fellow Berkeley Lab scientists Bill Collins and Margaret Torn, as well as Jonathan Gero of the University of Wisconsin-Madison, Timothy Shippert of Pacific Northwest National Laboratory, and Eli Mlawer of Atmospheric and Environmental Research.

The scientists used incredibly precise spectroscopic instruments operated by the Atmospheric Radiation Measurement (ARM) Climate Research Facility, a DOE Office of Science User Facility. These instruments, located at ARM research sites in Oklahoma and Alaska, measure thermal infrared energy that travels down through the atmosphere to the surface. They can detect the unique spectral signature of infrared energy from CO2. 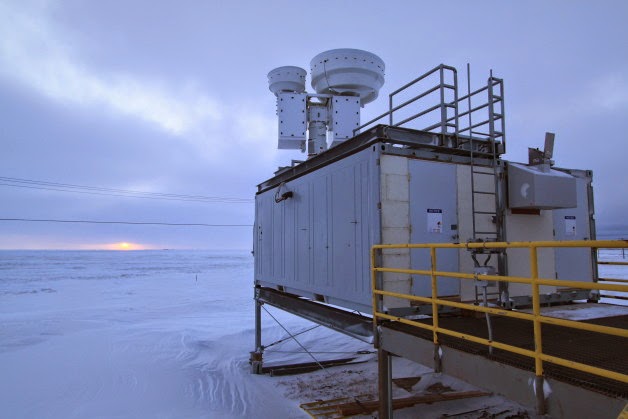 The scientists used  spectroscopic instruments operated by the
Department of Energy’s Atmospheric Radiation Measurement (ARM) Climate Research Facility.
This research site is on the North Slope of Alaska near the town of Barrow.
They also collected data from a site in Oklahoma. (Credit: Jonathan Gero)

Other instruments at the two locations detect the unique signatures of phenomena that can also emit infrared energy, such as clouds and water vapor. The combination of these measurements enabled the scientists to isolate the signals attributed solely to CO2.

“We measured radiation in the form of infrared energy. Then we controlled for other factors that would impact our measurements, such as a weather system moving through the area,” says Feldman.

Both series showed the same trend: atmospheric CO2 emitted an increasing amount of infrared energy, to the tune of 0.2 Watts per square meter per decade. This increase is about ten percent of the trend from all sources of infrared energy such as clouds and water vapor.

Based on an analysis of data from the National Oceanic and Atmospheric Administration’s CarbonTracker system, the scientists linked this upswing in CO2-attributed radiative forcing to fossil fuel emissions and fires.

The measurements also enabled the scientists to detect, for the first time, the influence of photosynthesis on the balance of energy at the surface. They found that CO2-attributed radiative forcing dipped in the spring as flourishing photosynthetic activity pulled more of the greenhouse gas from the air.

The scientists used the National Energy Research Scientific Computing Center (NERSC), a DOE Office of Science User Facility located at Berkeley Lab, to conduct some of the research.

The research was supported by the Department of Energy’s Office of Science.
###

Observational determination of surface radiative forcing by CO2 from 2000 to 2010
http://www.nature.com/nature/journal/vaop/ncurrent/full/nature14240.html