Considering the silliness of Dr. L.W. at SoD #2

Here's my last post regarding the denial games over at SoD.  I actually started with this review, but then Florifulgurator's comment came along and since it was much more interesting I took that digression.  Now I feel I still owe RD a rational accounting of Dr.LW's many fallacies since RD puts so much store in his spoof.
___________________________________________

The Holocaust, Climate Science and Proof

I started out conditionally accepting the AGW position because many experts claimed it was so.

~ ~ ~ ~ ~
And I started out learning about our planet's geophysics and its atmosphere...

LW wrote: However, I am a scientist, and looked in far more detail before I would accept it fully.

LW wrote: I do not deny the basic science as stated by SoD and others.

LW wrote: With me, the issue is how much the human burning of fossil fuel affects the net result, and what is the supporting evidence of consequences.

~ ~ ~ ~ ~
To understand any of that one must first understand our planet's CO2 cycle.
As for supporting evidence, one must make the effort to become familiar with it, not hide from it.

LW wrote: I clearly am presently a skeptic of the claim that there is a bad effect from human burning of fossil fuels,

§  Is there evidence that our burning of fossil fuels is causing our "global heat distribution engine" to warm up?
http://www.bgs.ac.uk/discoveringGeology/climateChange/CCS/Anthropogenic.html

§  Will warming (read energizing) our global heat distribution engine impact the rhythms of the global biosphere that humanity and society has developed within?
http://www.giss.nasa.gov/research/briefs/rosenzweig_02/

§  Will a warming climate system energize our atmosphere's hydrology, both by increasing the amount of water the troposphere holds and by increasing the energy that needs to be dissipated?
http://www.waterencyclopedia.com/Ge-Hy/Global-Warming-and-the-Hydrologic-Cycle.html
http://www.els.net/WileyCDA/ElsArticle/refId-a0020480.html

§  Are our food supply systems dependent on the established rhythms of our 'current' seasons and rain patterns?
http://www.usda.gov/oce/climate_change/effects_2012/CC%20and%20Agriculture%20Report%20(02-04-2013)b.pdf
http://www.nc-climate.ncsu.edu/edu/k12/ClimateChange-Ag

§  Will an increasingly warming planet cause it's cryosphere to melt at increasing rates?
http://nsidc.org/cryosphere/sotc
http://arctic.atmos.uiuc.edu/cryosphere/
http://globalcryospherewatch.org

§  Will that melting and warming cause global sea levels to rise?
http://sealevel.colorado.edu
http://tidesandcurrents.noaa.gov/publications/NOAA_Technical_Report_NOS_COOPS_073.pdf
http://phys.org/news/2013-06-sea-rose-mmyear.html

LW wrote: and I clearly think we should not waste resources addressing a non-problem. I explain why in the following:

~ ~ ~ ~ ~
What does that have to do with learning about the geophysical facts of Anthropogenic Global Warming?  Besides, "non-problem" ???

LW wrote: By looking back at all time scale where there was reasonable evidence, I concluded that natural variation can cause changes larger than the present variation, even over the last 10,000 years.

~ ~ ~
How nice sounding.  What does it mean?
How about first understanding the various drivers and how they interact to change climate.

LW wrote: In addition, the so called “normal” temperature reference level (the late 1800’s) was clearly at the tail end of an unusually cold period termed the Little Ice Age. It was in no way normal. It thus was difficult to sort out what was new, and what was natural variation.

Besides, think about it, what does recording global temperatures have to do with the actual physics of greenhouse gases and their cascading consequence?

Pssst, as for sorting out that little ice age:

LW wrote: When the temperature rapidly rose from 1970 to 1998, it appeared there was a clear supporting evidence of the human effect.

LW wrote: However, when it leveled out after that, the whole issue was upended. No model showed the flattening.

LW wrote: Continual re-writing has been done to try to show the flattening was not out of the possible with the claimed AGW.

"Consensus" being driven, and evolving
in light of the accumulating evidence.

LW wrote: However, if all of the data (1850-2015) is used rather than just 1970 to 1998, the slope of temperature increase is only about 0.4C per century. If the period from late 1930’s to present is used, the slope is about 0.4 C per century. Choosing a period to make the slope is arbitrary, and meaningless. These rates are also not useful. 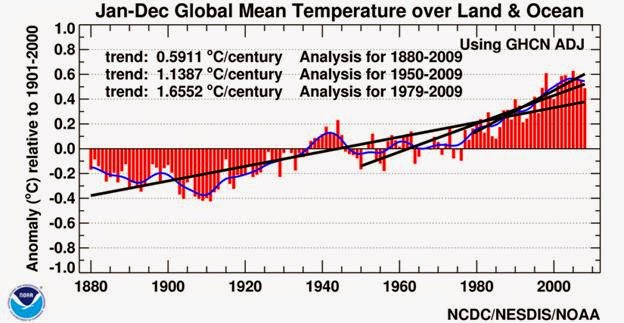 A pause or not a pause, that is the question.
https://tamino.wordpress.com/2014/12/04/a-pause-or-not-a-pause-that-is-the-question/

UPDATE: A new post at RealClimate is very relevant, and well worth the read.

... The paper studies the five most often-used global temperature records. Three of them are surface temperature estimates, from NASA GISS, HadCRU, and NCDC, the other two are satellite-based lower-atmosphere estimates from RSS and UAH. These are compared to three factors which are known to affect climate: the el Nino southern oscillation, atmospheric aerosols (mostly from volcanic eruptions), and variations in the output of the sun.
~ ~ ~
The Real Problem with the Global Warming “Debate”
https://tamino.wordpress.com/2011/11/05/the-real-problem-with-the-global-warming-debate/
_______________________________

~ ~ ~ ~ ~
Says who? This seems to be referring to Dr. Lindzen's defunct "Iris Effect" conjecture.

We must understand the full spectrum of information rather than relying on someone's self-certitude.  Dr. Dessler does just that in the following, which includes a few words about General Circulation Models:

LW wrote: Ocean currents have long period changes which affect temperature. In fact, the storage/release system can change average air temperature over long periods with no change in other causes (solar insolation, AGW).


In other words, the science can be correct, but not describe the temperature variation causes on long time scales.

But keep in mind manmade global warming is about what's happening to our planet's atmospheric insulation "layer".  Our oceans and their currents and oscillations live under that dome.  Oceans don't create or eliminate heat, they simply move it around.

LW wrote: Since we likely are approaching the end of the present interglacial (the Holocene) even if we were to tend to warm, it likely would be good rather than bad.

~ ~ ~ ~ ~
What does CO2 as plant food have to do with increasing our planet's atmospheric insulation and dangerous global warming?

Besides, it's no good to understand one sliver of information and ignore the rest.

Regarding this CO2 plant food, there's a fascinating story for those that take the time to learn.

There was a second comment but it's way too self-absorbed and contained nothing of serious climate science.  Sadly it's obvious he doesn't take his topic seriously enough to work at understanding it's most basic elements, so sad...
and now I'm done.
Good day SoD, RD and Dr.LW

Posted by citizenschallenge at 9:02 PM