Here's another worth-reading article that fits right into my project.  I hope these excerpts encourage you to read the complete original.  Though I think they left out something important in their conclusions.

Namely, the key roll of our innate  'personal ego' and 'self certitude'  - the feeling of revulsion at having to admit we are wrong about something, or don't know everything.

What's been lost (or was never found) is self-skepticism… or an appreciation that mistakes are learning opportunities… or god forbid a touch of healthy self-deprecation and humor and recognizing our own flaws.

"Namely, the key roll of our innate  'personal ego' and 'self certitude'  - the feeling of revulsion at having to admit we are wrong about something, or don't know everything."

as playing a role about not wanting to admit when one is wrong and I think you're definitely right about that. We touched on that point in the original journal article but probably glossed over it for sake of length in the Scientific American article.

If I can offer a reading recommendation that I think you might find
interesting--I really enjoyed it--it's the book "Mistakes were made
(but not by me)" by social psychologists Carol Tavris and Elliot
Aronson.  They cover a lot of research on why people refuse to admit
they're wrong in order to maintain their feelings of self-worth.

Why People "Fly from Facts"
Research shows the appeal of untestable beliefs, and how it leads to a polarized society

Our new research, recently published in the Journal of Personality and Social Psychology, examined a slippery way by which people get away from facts that contradict their beliefs. Of course, sometimes people just dispute the validity of specific facts. But we find that people sometimes go one step further and, as in the opening example, they reframe an issue in untestable ways. This makes potential important facts and science ultimately irrelevant to the issue.
...

In other words, we observed something beyond the denial of particular facts: We observed a denial of the relevance of facts.

These experiments show that when people’s beliefs are threatened, they often take flight to a land where facts do not matter. In scientific terms, their beliefs become less “falsifiable” because they can no longer be tested scientifically for verification or refutation.

Could this polarization be a consequence of feeling free of facts?

... These results bear similarities to the many studies that find when facts are fuzzier people tend to exaggerate desired beliefs.

...  We’ve learned that bias is a disease and to fight it we need a healthy treatment of facts and education.  We find that when facts are injected into the conversation, the symptoms of bias become less severe. But, unfortunately, we’ve also learned that facts can only do so much. To avoid coming to undesirable conclusions, people can fly from the facts and use other tools in their deep belief protecting toolbox. 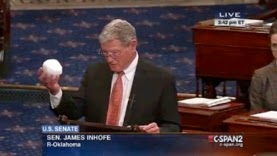 How to Win Friends and

The new documentary springs from the 2010 eponymous book by historians Naomi Oreskes and Erik Conway. The film (and the book before it) lays out how the fossil-fuel industry funds talking heads to sow confusion about climate change in a deliberate imitation of the successful doubt-sowing tactics of the tobacco industry. That industry famously employed experts in public relations, starting with venerable PR firm Hill+Knowlton, to cast doubt on the idea that smoking causes lung cancer or that nicotine was addictive, tactics that delayed regulation of the tobacco industry for decades. …

Posted by citizenschallenge at 11:40 AM