#1  "The Real Questions" according to Dr. Lindzen

My previous review was of the last two and half minutes of an interview by Alex Epstein with Dr. Lindzen.  Now that I've been introduced to the whole thing and had a chance to listen to it, it seems like all of it deserves some scrutiny.  So I've taken the time and trouble to transcribe much of it.

My intention is to review Lindzen's words and juxtapose his version of science with the real thing.  I'm going to break this up into smaller sections.  This one covering "the real questions" according to Richard Lindzen.


1:45  Alex:  Whenever I read one of his papers I get almost emotional just by the level of clarity and diligence and utter lack of any kind of appeal to authority.
I remember he was on this show last time, despite all his credentials the number one thing he encouraged was for people to do the research, look into things themselves. ... and I really consider that a very good indication for the quality of scientist and the quality of person someone is. ...
~ ~ ~ ~ ~ ~ ~
3:05  Lindzen: What bothers me about this issue is the intrinsic obtuseness of the questions.  For instance in these public consensus statements and so on, it's always is there agreement that CO2 plays a roll, or climate changes and so on.  These are things which in fact everyone agrees on.
Those are not the questions in dispute.
And yet it's presented as though if there's agreement that climate has changed, ahh, we should do something about it.

~ ~ ~
This is superficial silliness.  The issue has nothing to do with "climate has changed" - the consensus statements are about our manmade emissions of greenhouse gases significantly altering our atmosphere.
- - -


Why we need to talk about the scientific consensus on climate change
http://www.theguardian.com/environment/climate-consensus-97-per-cent/2014/nov/20/why-we-need-to-talk-about-scientific-consensus-on-climate-change
- - -

The agreements acknowledge the obvious: If we warm up our Earth's global heat and moisture distribution engine it will create more intense weather and disrupt natural systems that have been tens of thousands of years in the making.  This will lead to increasing problems for humanity and everything else.

As our climate changes, the risk of injury, illness, and death from the resulting heat waves, wildfires, intense storms, and floods rises.

Scientists and economists are beginning to grapple with the serious economic and environmental consequences if we fail to reduce global carbon emissions quickly and deeply. The most expensive thing we can do is nothing.

Lindzen: The real questions are, you know change is normal, it always occurs, is there anything unusual,


~ ~ ~ ~ ~ ~ ~
One would think Lindzen was aware that change is also disruptive, and too much change, too fast, is simply destructive.  Yet, it is such childish fig leaves that the Republican/libertarian masses cling to. 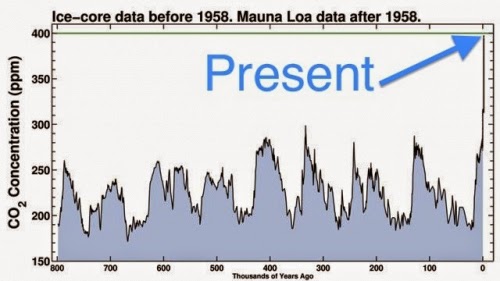 Lindzen: is the impact of CO2 large enough to be a significant,

The world’s oceans may be turning acidic faster today from human carbon emissions than they did during four major extinctions in the last 300 million years, when natural pulses of carbon sent global temperatures soaring, says a new study in Science. The study is the first of its kind to survey the geologic record for evidence of ocean acidification over this vast time period. “What we’re doing today really stands out,” said lead author Bärbel Hönisch, a paleoceanographer at Columbia University’s Lamont-Doherty Earth Observatory.

Lindzen: are things like global warming related in any clear way to the claims of natural disasters.

Bulletin of the American Meteorological Society
Vol. 95, No. 9, September 2014
EXPLAINING EXTREME EVENTS OF 2013 FROM A CLIMATE PERSPECTIVE
http://www2.ametsoc.org/ams/index.cfm/publications/bulletin-of-the-american-meteorological-society-bams/explaining-extreme-events-of-2013-from-a-climate-perspective/
- - -

Lindzen: And those are always left as kinda nits to pick, but you know, like once you establish climate changes, you have to do something, and the doing something is really much more akin to ancient rituals.  When natural phenomena occur you do some abstract gesture to please the gods, or call them off.(giggle)The fact that the subject is presented in such a dishonest way should immediately cause suspicion.

What could be more dishonest than ignoring the evidence with an outlandish rhetoric device, such as invoking "akin to ancient rituals"  "abstract gesture to please gods" to dismiss what you don't want to face.  (This is school yard pissy student talk Dr. Lindzen you're behaving childishly.)

What I resent most about such Republican/libertarian theater is that it's always drawing attention away from learning about our planet Earth as though understanding was their enemy.

I myself like learning and better understanding this marvelous planet that surrounds me.  It's frustrating not being able to convey some of that wonder and appreciation, because without a fundamental understanding of our great and complex planet, it's impossible to grasp what's going on out there.  Which unfortunately is exactly what Dr. Lindzen and pals want to achieve, confusion and public apathy.

For the few who do want to understand for themselves, here's a nice easy viewing documentary, a grand tour of our global heat and moisture distribution engine.  An excellent introduction.


The groundbreaking two-hour special that reveals a spectacular new space-based vision of our planet. Produced in extensive consultation with NASA scientists, NOVA takes data from earth-observing satellites and transforms it into dazzling visual sequences, each one exposing the intricate and surprising web of forces that sustains life on earth.