Goal of this article: A) To convey a recognition and appreciation of the fundamental components of our planet's climate system.  B)  To explain the difference between "Global Surface Temperature" and the "Global Temperature" (Something everyone conflates way the heck too often!).

Our Earth's climate is a global heat and moisture distribution engine consisting of three major components. 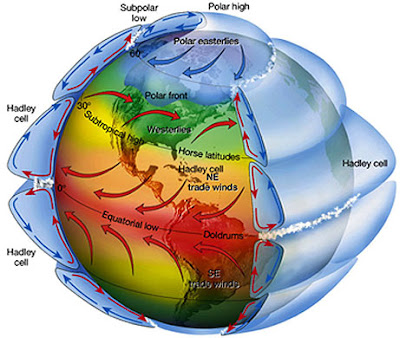 The troposphere is held in place and insulated from space by the stratosphere, mesosphere, thermosphere and finally the exosphere topping out in the neighborhood of three hundred miles - actually, on the leeward side of Earth it goes way beyond, but that's a different story.

Fortunately for life, our atmosphere contains certain greenhouse gases that act to slow down the heat escaping from the surface thus acting as insulation that keeps our planet livable.  The troposphere holds pretty much all the water in the atmosphere, scientists calculate it adds up to a little over 3,000 cubic miles of liquid water.  If spread over the Earth's surface it would amount to an inch.

The second major component is Earth's oceans with their store of 320,000,000 cubic miles worth of water, if you could spread that over the Earth's surface it would be over a mile and half deep.


https://www.youtube.com/watch?v=CCmTY0PKGDs  -  NASA Goddard
One key point to learn here is that water has a very "high specific heat" - meaning it needs a large amount of "heat" to warm and it gives off a large amount when cooled.  Thus water acts as a heat transporter and stabilizer within systems it's a part of.

The third major component is our Sun's thermonuclear radiation streaming down 24/7/365.  These energetic rays hit the equatorial belt most forcefully.  Some of those rays are reflected back into space, the rest are absorbed by the surface where they transform into heat that is then reradiated as infrared rays streaming out in all directions through the atmosphere.

https://www.youtube.com/watch?v=6hD52H7rQak  -  NASA Goddard
The "greenhouse effect" is caused by the longer infrared radiation getting hung up and stored by the molecular structure of so-called "greenhouse gases", thus the insulating effect.  This "greenhouse effect" is thoroughly understood.  As evidenced by a number of modern marvels that would be impossible without such understanding, so it seems we can trust the experts to know their business.

On the oceans the sun's rays are absorbed into the water and warm it, the warmer water gets, the more vapor the ocean releases.  Not only that, the warmer the atmosphere, the more moisture it can absorb, along with its accompanying huge amounts of latent heat.

Thus, the infrared heat and evaporated moisture from the ocean are driven up and polar ward by convection currents that run into Earth's rotational forces (coriolis effect), creating a series of circulation patterns, which effectively transport heat from the hot tropics toward the frigid polar regions.  This flow is constantly replenished by the sun's relentless insolation on the equatorial belt.

Our weather is the physical expression of those forces in action as they distribute and endlessly work towards equalizing regional barometric differentials, heat gradients and such, using cyclonic forces driven by Earth's rotation.

This should go a long in explaining why the Earth's "global surface temperature" contains all of a tenth of the system's heat, while the ocean contains the remaining lion's share.

There are many sub-components to this global heat engine, and it gets as complex as you care to make it, but this remains the fundamental situation, no getting around it, no matter how many words you throw at it!
______

Faulting scientists for gaps, particularly when those gaps are getting very small indeed, is setting up impossible expectations.  It's another example of devious misdirection intent on causing confusion, rather than understanding.

We should instead reflect on the lessons already learned during the incredible learning curve that climatologists have experienced over the past half century.

Scientists have been studying this global heat and moisture distribution engine for a couple centuries.  Each generation learning from their predecessors, building on their knowledge and learning from their mistakes, and always refining the understanding.

Yet, for purely self-serving political purposes the Republican/libertarian tribe tells us tens of thousands of professional scientists building on two centuries of substantive work, shouldn't be trusted.  While public apathy let's them get away with it.

All the while the evidence of destructive consequences are being felt throughout the world with increasing tempo.  What a frightening brave new world we've invited into our lives.  Most frightening, consider that most of our population remains asleep at the wheel.

There's a wonderful Nova/NASA video that provides a very good introduction into the complexities of our global heat and distribution engine:

And now for links regarding the dark side of the Republican/libertarian drive to dumb down America and sacrifice our children's future for their own love of gluttony.

Merchants of Doubt
by Naomi Oreskes and Erik Conway
http://www.merchantsofdoubt.org


In their new book, Merchants of Doubt, historians Naomi Oreskes and Erik Conway explain how a loose–knit group of high-level scientists, with extensive political connections, ran effective campaigns to mislead the public and deny well-established scientific knowledge over four decades. In seven compelling chapters addressing tobacco, acid rain, the ozone hole, global warming, and DDT, Oreskes and Conway roll back the rug on this dark corner of the American scientific community, showing how the ideology of free market fundamentalism, aided by a too-compliant media, has skewed public understanding of some of the most pressing issues of our era.

The Republican War on Science

Science has never been more crucial to deciding the political issues facing the country. Yet science and scientists have less influence with the federal government than at any time since Richard Nixon fired his science advisors. In the White House and Congress today, findings are reported in a politicized manner; spun or distorted to fit the speaker’s agenda; or, when they’re too inconvenient, ignored entirely. On a broad array of issues-stem cell research, climate change, evolution, sex education, product safety, environmental regulation, and many others-the Bush administration’s positions fly in the face of overwhelming scientific consensus. Federal science agencies-once fiercely independent under both Republican and Democratic presidents-are increasingly staffed by political appointees who know industry lobbyists and evangelical activists far better than they know the science.
This is not unique to the Bush administration, but it is largely a Republican phenomenon, born of a conservative dislike of environmental, health, and safety regulation, and at the extremes, of evolution and legalized abortion. In The Republican War on Science, Chris Mooney ties together the disparate strands of the attack on science into a compelling and frightening account of our government’s increasing unwillingness to distinguish between legitimate research and ideologically driven pseudoscience.
_________________________________________________

The GOP Intensifies Its Attacks On The National Science Foundation

Republicans Are Attacking Climate Change Science by Comparing It to Religion

“Skeptics of manmade climate change offer various natural causes to explain why the Earth has warmed by 1.4°F since 1880.”

OK lets take a look at...
Earth’s Orbit
the Sun
Volcanoes
how about...
Deforestation
Ozone pollution
Aerosol Pollution
what about so-called...
Greenhouse gases?

Check out the graph and slowly scroll down.
http://www.bloomberg.com/graphics/2015-whats-warming-the-world/

Posted by citizenschallenge at 9:23 AM