edited 12/30/15 am
There's a character out there in YouTube land who's been pumping out incredibly deceitful videos at a prodigious rate.  Rumor has it, it's none other than Lord Monckton.  When I asked him directly he was very coy about it.  I would expect no less from one of the world's foremost political entertainers.  I'd already had a couple comment go-around with 1000frolly, and I have an acquaintance with the Lord going back five years now, so I wasn't surprised that he (er… 1000frolly) has chosen to "Ghost" me at the 1000frolly YouTube channel.

This from men who self-righteously demand that serious full-time working professionals stop everything to run off for a kangaroo debate with self-certain dabblers.  Interestingly, these same people never stand up to a constructive debate themselves?  Nor do they ever learn from information that's been shared?

To underscore the disingenuous nature of their challenge, they refuse to follow through on serious fact based rational debates that they are challenged with, instead opting to remain within their echo-chamber.

One tactic is "Ghosting" - challenging commenters on one's YouTube channel.
How "Ghosting" works is that a targeted individual can see his/her own comments when logged in, making it appear that your comments are a part of the discussion.  However, if you log out of your account and return to the same video you will see that your comment has disappeared, for example: 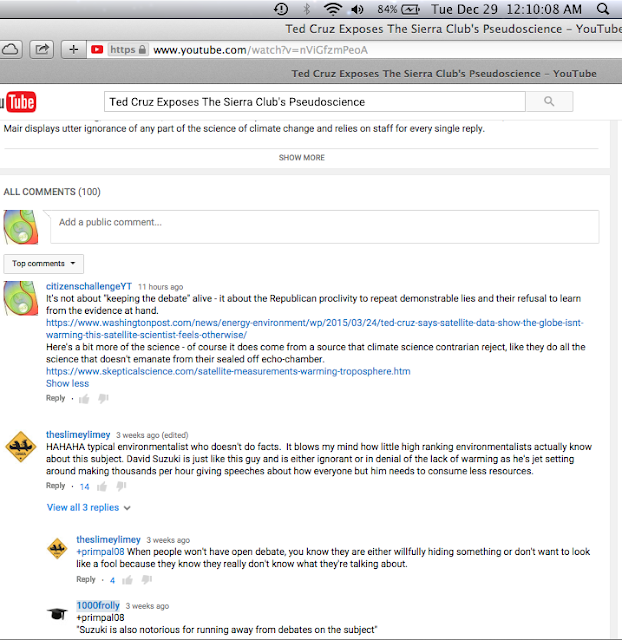 See, nicely cleansed of all questions and information challenging their party-line. 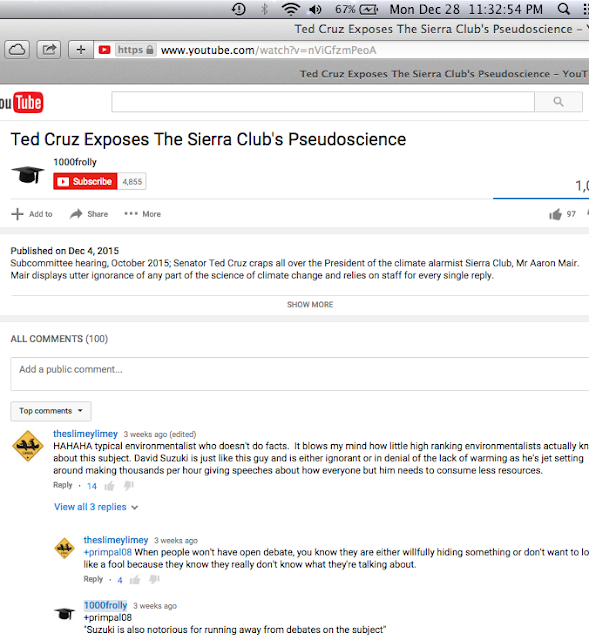 What's tragic is how few students who know better are offended enough to stand up and add their own thoughtful correcting comments to such maliciously misleading videos or internet articles and such. - Why not make the effort to point out the many deceitful tricks being employed, then offering up real world information so at least people are aware that real evidence is out there.

… The key phrase here is “satellite data demonstrate for the last 17 years, there’s been zero warming. None whatsoever.” And it’s noteworthy, because it shows that Cruz has done some homework and found a particular type of data that would appear to support his claim.

… To explore Carl Mears' (a physicist and senior scientist at Remote Sensing Systems, whom Cruz quoted.) views further, I did one thing journalists can do when covering the climate views of presidential candidates — I contacted the researcher. And his response was quite critical of Cruz’s approach to the evidence on this issue:

Mr. Cruz (and others who seek to minimize the threat posed by climate change) likes to cite statistics about the last 17 years because 17 years ago, the Earth was experiencing a large ENSO [El Nino-Southern Oscillation] event and the observed temperatures were substantially above normal, and above any long-term trend line a reasonable person would draw.

When one starts their analysis on an extraordinarily warm year, the resulting trend is below the true long term trend. It’s like a pro baseball player deciding he’s having a batting slump three weeks after a game when he hit three homers because he’s only considering those three weeks instead of the whole season.

Mears went further, explaining that while he studies satellite data, we probably shouldn’t rely on those data more than we rely on the temperatures that NASA and NOAA are using:

A very important study was just published in the Journal of Climate a few days ago. ...

The publication, authored by Stephen Po-Chedley and colleagues from the University of Washington, discusses some major sources of error in satellite records. For instance, after satellites are launched, they scan the Earth’s atmosphere and calibrate the atmospheric measurements using a warm target onboard the satellite and cold space.

Satellite measurements of warming in the troposphere
https://www.skepticalscience.com/satellite-measurements-warming-troposphere-intermediate.htm

Posted by citizenschallenge at 12:52 AM