Jack Szostak - Origins, geochemistry to biochemistry - What a scientist sounds like.

Whereas Robert Hazen went after the origins problem from a mineralogist's perspective, Professor of chemistry and chemical biology, the 2009 Nobel Prize laureate Jack Szostak goes at it from his expertise, the biologist’s perspective.
Both have found that they needed to combine their expertise and to reach out to other branches of science in order to constructively tackle the problem of understanding the transition from geochemistry to biochemistry and then to full blown life as we know it.
He is another excellent public speaker so his talks are a joy to listen to.  Here I share a collection of seven informative videos of his talks along with some bio information.


Jack Szostak: The Early Earth and the Origins of Cellular Life
https://www.youtube.com/watch?v=h1KqvoLEj7c

Lecture by Dr Jack Szostak, 2009 Nobel laureate in Physiology or Medicine, at the Molecular Frontiers Symposium "Planet Earth: A Scientific Journey", at Stockholm University May 9-10, 2019.


We are interested in the chemical and physical processes that facilitated the transition from chemical evolution to biological evolution on the early earth. As a way of exploring these processes, our laboratory is trying to build a synthetic cellular system that undergoes Darwinian evolution.
Our view of what such a chemical system would look like centers on a model of a primitive cell, or protocell, that consists of two main components: a self-replicating genetic polymer and a self-replicating membrane boundary.
The job of the genetic polymer is to carry information in a way that allows for both replication and variation, so that new sequences that encode useful functions can be inherited and can further evolve. The role of the protocell membrane is to keep these informational polymers localized, so that the functions they encode lead to an advantage in terms of their own replication or survival.
Such a system should, given time and the right environment, begin to evolve in a Darwinian fashion, potentially leading to the spontaneous emergence of genomically encoded catalysts and structural molecules.
We hope that our explorations of the chemistry and physics behind the emergence of Darwinian evolution will lead to explanations for some of the universal properties of modern cells, as well as explanations of how modern cells arose from their simpler ancestors. As we explore these fundamental questions we are also on the lookout for chemical or physical phenomena that might have practical utility in biomedical research.

Nobel Prize winner Dr Jack Szostak's lecture at the Molecular Frontiers Symposium at the Royal Swedish Academy of Sciences in Stockholm, Sweden, May 2011. The topic of the symposium was "Origin of Life and Molecular Evolution". Check our YouTube channel for more exciting science videos! For more information, visit www.molecularfrontiers.org 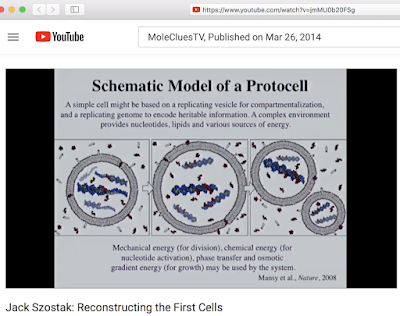 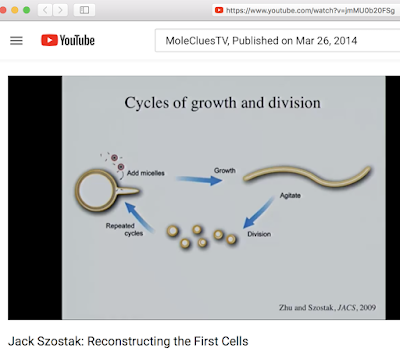 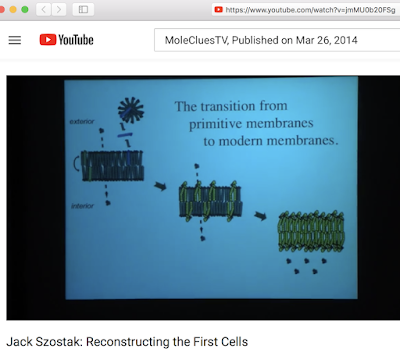 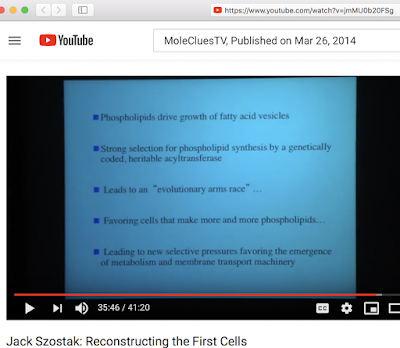 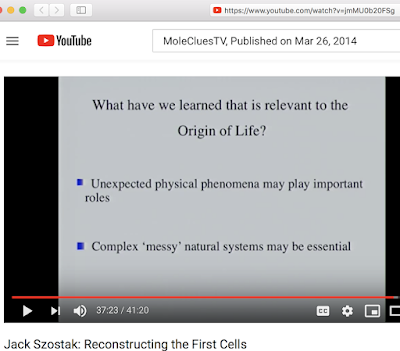 Szostak begins his lecture with examples of the extreme environments in which life exists on Earth.  He postulates that given the large number of earth-like planets orbiting sun-like stars, and the ability of microbial life to exist in a wide range of environments, it is probable that an environment that could support life exists somewhere in our galaxy.  However, whether or not life does exist elsewhere, depends on the answer to the question of how difficult it is for life to arise from the chemistry of the early planets.  Szostak proceeds to demonstrate that by starting with simple molecules and conditions found on the early earth, it may in fact be possible to generate a primitive, self-replicating protocell.
~~~~~~~~~~~~~~~~~~~~

This video presents evidence for RNA-based primitive life. It also discusses the importance of sharing data from scientific studies, and how scientific breakthroughs often result from the accumulation of evidence over decades of research by different groups. 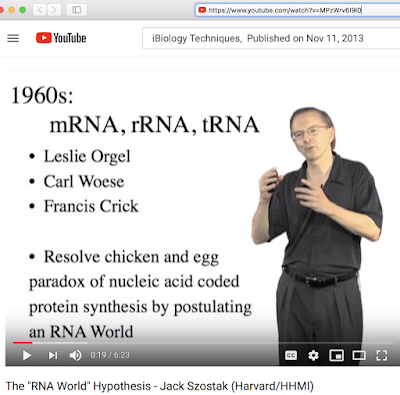 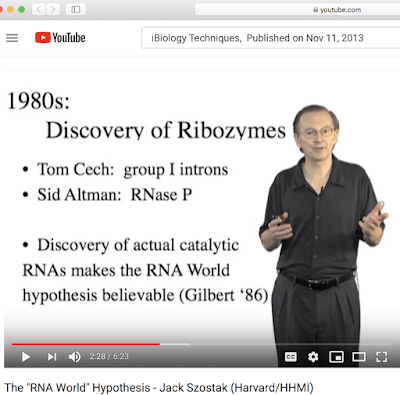 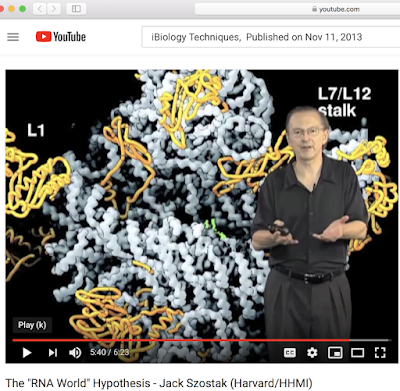 Work:
An organism's genes are stored within DNA molecules, which are found in chromosomes inside its cells' nuclei. When a cell divides, it is important that its chromosomes are copied in full, and that they are not damaged. At each end of a chromosome lies a "cap" or telomere, as it is known, which protects it. After Elizabeth Blackburn discovered that telomeres have a particular DNA, through experiments conducted on ciliates and yeast, she and Jack Szostak proved in 1982 that the telomeres' DNA prevents chromosomes from being broken down.
______________________________________

Posted by citizenschallenge at 8:31 AM