Robert Hazen - Origins, mineral evolution - What a scientist sounds like. 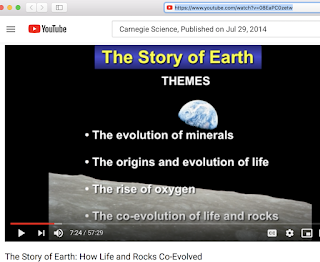 In order to get a change of scenery I spent the summer of 2006 working north of Boulder and living in a Teepee.  My transportation was mainly my bike and Longmont was a better destination than crowded Boulder.  It also sported a very nice library with a big non-fiction audio book collection, which was very exciting considering I’d long run out of decent nonfictions at my home town fiction loving library.  Browsing through their rows of “The Great Courses” series, I spied something new "Origins of Life."

With a title like that, I couldn’t say no.  It turned out to deliver one astounding surprise after another, along with a few revelations to boot.  I needed to listened a second time before returning, despite its 12 hour length.  Since then I've made a point of listening to pretty near every YouTube lecture featuring him and there are many.

I also liked that this new understanding also vindicates my own reflexive disgust at having read some serious scientists assume that for the first few billions of years nothing happened on Earth.  It seemed a ridiculous notion to me and so it was.  Just like junk DNA, or wasted brain matter, nonsense - it was simply that we hadn’t learned enough to know what it was doing yet.  Seems that conceit and short sightedness has been a predominate feature in human thinking going way back.

More recently I’ve purchased and listened to another couple outstandingly informative Robert Hazen reads - You can’t go wrong with them if you’d like to discover a more complete understanding of the process of Evolution and our world’s creation unfolding one day at a time.

The Story of Earth: The First 4.5 Billion Years, from Stardust to Living Planet

Symphony in C: Carbon and the Evolution of (Almost) Everything

Then there are the videos, everyone fascinating, some overlap, but each offers a little bit others don’t.  This is my lazy guy’s path to serious learning:

Origin of Life - How Life Started on Earth
A nifty NOVA documentary
https://www.youtube.com/watch?v=xyhZcEY5PCQ

If you want to get down to the meat and potatoes these lectures are the way to go:

The Story of Earth: How Life and Rocks Co-Evolved
https://www.youtube.com/watch?v=08EaPC0zetw

The story of Earth is a 4.5-billion-year saga of dramatic transformations, driven by physical, chemical, and—based on a fascinating growing body of evidence—biological processes. The co-evolution of life and rocks, the new paradigm that frames this lecture, unfolds in an irreversible sequence of evolutionary stages. Each stage re-sculpted our planet's surface, each introduced new planetary processes and phenomena, and each inexorably paved the way for the next. This grand and intertwined tale of Earth's living and non-living spheres is only now coming into focus.
Sequential changes of terrestrial planets and moons are best preserved in their rich mineralogical record. "Mineral evolution," the study of our planet's diversifying near-surface environment, began with a dozen different mineral species that formed in the cooling envelopes of exploding stars. Dust and gas from those stars clumped together to form our stellar nebula, the nebula formed the Sun and countless planetesimals, and alteration of planetesimals by water and heat resulted in the approximately 250 minerals found today in meteorites that fall to Earth.
Following Earth's growth and separation into the core, mantle, and crust, mineral evolution progressed by a sequence of chemical and physical processes, which led to perhaps 1500 mineral species. According to some origin-of-life scenarios, a planet must evolve through at least some of these stages of chemical processing as a prerequisite for life. Once life emerged, mineralogy and biology co-evolved, as changes in the chemistry of oceans and atmosphere dramatically increased Earth's mineral diversity to the almost 5000 species known today.
~~~~~~~~~~~~~~~~~~~~~~~~~~~~~~~~~~~~~~~~~~~~~~~~~~~~~

Robert Hazen - Mineral Evolution and Ecology and the Co-evolution of Life and Rocks   (March 11, 2015)
https://www.youtube.com/watch?v=nuteon-8Wt4 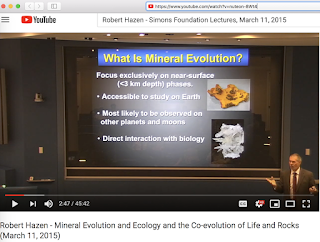 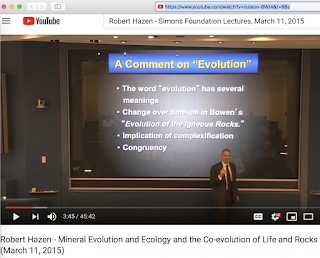 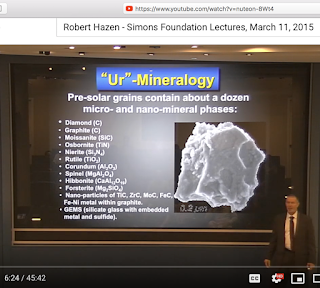 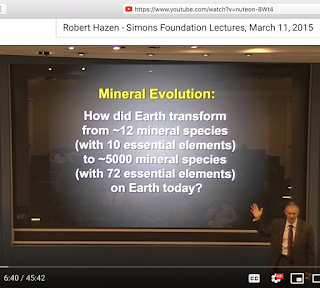 The Emergence of Life on Earth
https://www.youtube.com/watch?v=W1fRfV_TTAo 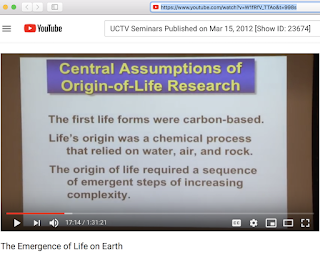 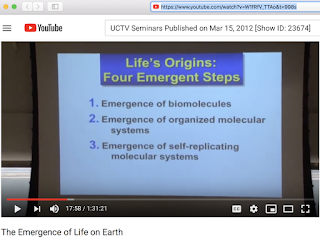 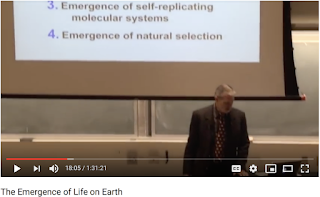 ROBERT HAZEN - CHANCE, NECESSITY, AND THE ORIGINS OF LIFE
https://www.youtube.com/watch?v=TlAQLgTwJ_A

Hazen looks at the big questions:
Is life a cosmic imperative?
How can we study life’s origins in the lab?
Does life exist on other worlds?
. . . and he shares some breaking science news

Earth's 4.5 billion year history is a complex tale of deterministic physical and chemical processes, as well as "frozen accidents". Most models of life's origins also invoke chance and necessity.
Recent research adds two important insights to this discussion.
First, chance versus necessity is an inherently false dichotomy--a range of probabilities exists for many natural events.
Second, given the astonishing combinatorial chemical richness of early Earth, events that are extremely rare may, nevertheless, be deterministic on time scales of a billion years.
~~~~~~~~~~~~~~~~~~~~~~~~~~~~~~~~~~~~~~~~~~

Dr Robert Hazen - Frontiers of Science
The Story of Earth: How Life and Rocks Co-evolved
https://www.youtube.com/watch?v=BX9-d9Rp9dM

University of Utah College of Science, Published on Dec 11, 2017 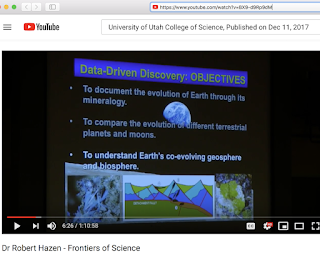 The story of Earth is a 4.5-billion-year saga of dramatic transformations, driven by physical, chemical, and—based on a fascinating growing body of evidence—biological processes. The co-evolution of life and rocks, the new paradigm that frames this lecture, unfolds in an irreversible sequence of evolutionary stages. Each stage re-sculpted our planet’s surface, each introduced new planetary processes and phenomena, and each inexorably paved the way for the next. This grand and intertwined tale of Earth’s living and non-living spheres is only now coming into focus. (recorded December 7, 2017)
~~~~~~~~~~~~~~~~~~~~~~~~~~~~~~~~~~~~~~~~~~~~~~~~~ 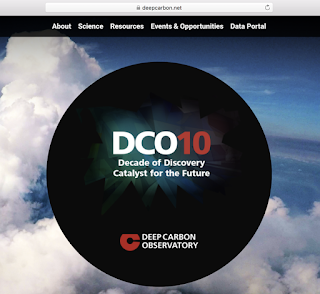 The Deep Carbon Observatory (DCO) is a global community of more than 1000 scientists on a ten-year quest to understand the quantities, movements, forms, and origins of carbon in Earth.

Who we are
Ninety percent of Earth’s carbon resides inside the planet, yet we are only just beginning to understand the many ways deep carbon impacts the oceans, atmosphere, and life at the surface. That’s why in 2009 a team of scientists launched an international collaboration, with the support of the Alfred P. Sloan Foundation, to investigate how the deep carbon cycle drives our world.

DCO brings together a multidisciplinary group of scientists, including geologists, chemists, physicists, and biologists.
Our community, the DCO Science Network, is made up of more than 1200 scientists from 55 countries, involving scientists at all stages of their careers. Many opportunities exist for early career scientists to be active participants in the Network.

How we bring research to life
The DCO Data Science Team works independently and in collaboration with scientists across the four communities to develop new analyses and exploit large, connected datasets.
Our Modeling and Visualization Initiative provides researchers with tools and techniques to better share their scientific findings among colleagues and with the public.

The DCO Engagement Team shares DCO science with scientists, educators, and the public via this website, Twitter, Facebook, YouTube, and Flickr to help ensure DCO’s scientific findings are integrated into current scientific thinking.
DCO offers a wide array of resources for educators to help integrate DCO’s latest findings into university-level curricula.
Since Wikipedia is the first stop for information on the web, DCO is committed to integrating the latest deep carbon science research on Wikipedia. Learn how you can help.

Policies that guide our work
Members of the DCO Science Network commit to an atmosphere of collegiality and respect.
We are committed to sharing DCO Science in an openly accessible way, and strive to publish and archive our work responsibly and sustainably.
Posted by citizenschallenge at 8:18 PM