At what point can we say there is no more global warming?

One of my personal learning tools is the SkepticSocietyForum’s Climate Change board.  I find it helpful to be confronted with contrary views and articles.  Also lately I only have limited windows of opportunity to write and it’s a good place to get in some quick practice.

In any event, I’ve long wanted to work some of those discussions into posts over here
or at citizenschallenge.blogspot.com and I figure I might as well start doing so with this thread.

This is actually post #146 in the thread and is a simple presentation of current news.  Followed by some thoughts from a Class of '73 high school grad.


At what point can we say there is no more global warming?

At what point can we say there is no more global warming?


Well, it looks like you can bet it won't happen during our life times... or for the next few thousand years even.  Here's some evidence:

"What is probably the most extraordinary anomalous heat event in U.S. (and portions of Canada) history has finally begun to slacken at the time of this writing (March 23rd). Never before has such an extended period of temperatures so far above normal been recorded. Here is a summary of some of the statistics so far. . ."

The Amazing June Heat Wave of 2012. Part 1: The West and Plains June 23-27
http://www.wunderground.com/blog/weatherhistorian/comment.html?entrynum=79

One of the most intense heat waves in U.S. history has enveloped portions of the western plains and Midwest and has now spread eastward. All-time heat records have fallen at a number of significant weather stations. And it is still just June. Is this a prelude for the coming summer or just a flash in the pan?

The scientists base their analysis on three pillars: basic physics, statistical analysis and computer simulations.

Elementary physical principles already suggest that a warming of the atmosphere leads to more extremes. For example, warm air can hold more moisture until it rains out.
Secondly, clear statistical trends can be found in temperature and precipitation data, the scientists explain.
And thirdly, detailed computer simulations also confirm the relation between warming and records in both temperature and precipitation.


And this just in

Large swaths of the Midwest and Mid-Atlantic dug out Saturday hours after killer thunderstorms barreled through, a recovery made more complicated -- and dangerous -- by intense summer heat.
{...}
"This is on par with Hurricane Irene," said Maryland Gov. Martin O'Malley, referring to last year's storm that was blamed for at least 20 deaths across eight states. 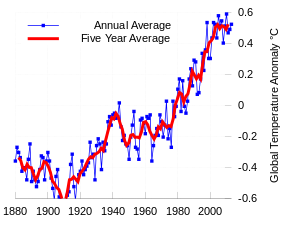 This one... guess it's just my lament.

What makes me sad is that these headlines and events of today were the paranoid nightmares of tree hugging extremists in the 70s and 80s.

People weren’t going to let things get that crazy.  We were thoughtful and ingenious people, we could learn from history and science and build a better future.  Oh Christ Jesus and Muhammad look what happened.  Instead of thoughtful maintenance of our life supporting biosphere - we dedicated our collective national efforts to gluttony* and creating senseless, if profitable, wars.

And now we’ve started that massive climate 'fly-wheel' turning, hang on, it’s going to be a hell of a ride.

So I sit here on my hillside wondering why that all-around contempt for concepts such as learning, respect, fair-play, maintenance and nurturing.  Why are those values so utterly lacking in our actions toward the world, and people, around us?  Why have we devolved back into tribalism and blindfolded dogmatism?


* well that and religious megalomania


my signature over at skepticforum.com

Email ThisBlogThis!Share to TwitterShare to FacebookShare to Pinterest
Labels: About That Lack Of Warming, AGW Hoaxers, climate change