Will, this one's for you - What we knew a half century ago.

(Well that was one of the worst intros I've written in a while, let me try that again. - edited Nov 8th PM)

I read an article that fits right into my recent retrospective musings* regarding global warming and what we are willingly doing to our children's future.

The key point:
On 5 November, 1965, the group now known as the President’s Council of Advisors on Science and Technology (PCAST) cautioned President Lyndon B. Johnson that continued accumulation of atmospheric carbon dioxide resulting from fossil-fuel burning would “almost certainly cause significant changes” and “could be deleterious from the point of view of human beings.”

You see climate science contrarians I deal with continue pretending there's still substantial doubt regarding the fundamentals of what we are doing. Nonsense!

The foundations of a clear understanding that society actually was conducting a global geophysical experiment go back over 60 years.  In fact, we recently passed one of the early big milestones of that growing recognition - which Dana Nuccitelli reports on.

With thanks to SkepticalScience.com, here's something to think about next time some contrarian character tries telling you there's a lot of uncertainty regarding climate science and what injecting over two gigatons of greenhouse gases into our thin atmosphere month, after month, after endless month will do.

(Will, I gotta tell you, I sit slack jawed wondering, how can people so delude themselves that they trivialize this reality in favor of demanding to know the exact speed of our rush to catastrophe. Or waste precious time arguing total trivialities while ignoring the gorilla in the room.

Re. CAGW, if you think upending our planet's climate system isn't catastrophe on every level, you're lost within your own daydreams, oblivious to this Earth and the workings of this complex society you depend on but take oh so for granted.

Remember what environmentalists were saying back in those 'innocent' 60s:

Fifty years ago today, as the American Association for the Advancement of Science highlighted, US president Lyndon Johnson’s science advisory committee sent him a report entitled Restoring the Quality of Our Environment. The introduction to the report noted:

Pollutants have altered on a global scale the carbon dioxide content of the air and the lead concentrations in ocean waters and human populations.

The report included a section on atmospheric carbon dioxide and climate change, written by prominent climate scientists Roger Revelle, Wallace Broecker, Charles Keeling, Harmon Craig, and J Smagorisnky. Reviewing the document today, one can’t help but be struck by how well these scientists understood the mechanisms of Earth’s climate change 50 years ago.

The report noted that within a few years, climate models would be able to reasonably project future global surface temperature changes. In 1974, one of its authors, Wallace Broecker did just that in a paper titled Climatic Change: Are We on the Brink of a Pronounced Global Warming?.

You can read the details about this paper and Broecker’s modeling here and in my book Climatology versus Pseudoscience. His model only included the effects of carbon dioxide and his best estimates of natural climate cycles. It didn’t include the warming effects of other greenhouse gases, or the cooling effects of human aerosol pollution, but fortunately for Broecker those two effects have roughly canceled each other out over the past 40 years.

Broecker’s model predicted the global warming anticipated by 2015 both from carbon pollution alone, and when including his best estimate of natural climate cycles. In the figure below, the carbon-caused warming is shown in blue, and in combination with natural cycles (which Broecker turns out not to have represented very accurately) in green, as compared to the observed global surface temperatures from NOAA in red. As you can see, the climate model predictions from over 40 years ago turned out to be remarkably accurate. 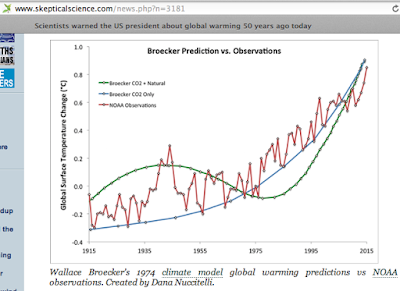 The 1965 report also debunked a number of myths that climate contrarians continue to repeat to this day. For example, the first section of the climate chapter is titled Carbon Dioxide from Fossil Fuels – the Invisible Pollutant. Although the US supreme court ruled that carbon dioxide is a pollutant in a landmark 2007 case, many contrarians object to this description. Nevertheless, climate scientists realized a half century ago that human carbon emissions qualify as pollution due to the dangers they pose via climate change.

The report noted that although carbon dioxide is an invisible “trace gas” – meaning it comprises a small percentage of the Earth’s atmosphere as a whole – it can nevertheless have significant impacts on the climate at these seemingly low levels. As the scientists wrote:

Only about one two-thousandth of the atmosphere and one ten-thousandth of the ocean are carbon dioxide. Yet to living creatures, these small fractions are of vital importance … Within a few short centuries, we are returning to the air a significant part of the carbon that was slowly extracted by plants and buried in the sediments during half a billion years.

Contrarians today often repeat the myths that because carbon dioxide is invisible and only a trace gas, it can’t possibly cause significant climate change. This report demonstrates that scientists understood the greenhouse effect better 50 years ago than these contrarians do today.

The report documented the several different lines of evidence that prove the increase in atmospheric carbon dioxide is entirely human-caused, concluding:

We can conclude with fair assurance that at the present time, fossil fuels are the only source of CO2 being added to the ocean-atmosphere-biosphere system.

The report also projected how much the atmospheric carbon dioxide level would increase in the following decades.

Based on projected world energy requirements, the United Nations Department of Economic and Social Affairs (1956) has estimated an amount of fossil fuel combustion by the year 2000 that with our assumed partitions would give about a 25 percent increase in atmospheric CO2, compared to the amount present during the 19th Century.

A 25% increase from pre-industrial levels would result in about 350 ppm of carbon dioxide in the atmosphere. The United Nations underestimated the growth in fossil fuel combustion, because the actual carbon dioxide level in 2000 was 370 ppm.

In addition to rising temperatures, the report discussed a variety of “other possible effects of an increase in atmospheric carbon dioxide”, including melting of the Antarctic ice cap, rise of sea level, warming of sea water, increased acidity of fresh waters (which also applies to the danger of ocean acidification, global warming’s evil twin), and an increase in plant photosynthesis.

These climate scientists warned President Johnson in 1965 not just of the dangers associated with human-caused global warming, but also that we might eventually have to consider geoengineering the climate to offset that warming and the risks that we’re causing by inadvertently running a dangerous experiment with the Earth’s climate.]

PS. for some of the details, here's a great read:

Roger Revelle's Discovery
Before scientists would take greenhouse effect warming seriously, they had to get past a counter-argument of long standing. It seemed certain that the immense mass of the oceans would quickly absorb whatever excess carbon dioxide might come from human activities. Roger Revelle discovered that the peculiar chemistry of sea water prevents that from happening. His 1957 paper with Hans Suess is now widely regarded as the opening shot in the global warming debates. This essay not only describes Revelle's discovery in detail, but serves as an extended example of how research found essential material support and intellectual stimulus in the context of the Cold War
https://www.aip.org/history/climate/Revelle.htm
_______________________________________________________________

Posted by citizenschallenge at 8:12 AM