Part 5b - Debating ClimateDepot fan: of politics and environmentalism

In this installment I'm taking another bite out of WillH's last comment.  It's only the next sentence, since he continues getting personal and rather than be reduced to calling him names or some such nonsense, I'd rather explore his words in more detail.  Admittedly, I'm also hoping I'm not the only one getting something out of this.

Will H writes: .. (see 5a) … "Concerning Our Failure to Appreciate the Weather"  I did read your article. You seem to be primarily into the politics of AGW and are an environmentalist. …"

"Primarily into the politics" ?  What does that even mean?  Do you have a rational explanation?  What are you yourself doing if not "politics"?  You certainly aren't contributing to the science.  What about your pal ClimateDepot's own Mr. Morano,  that alpha political operative, Mr. Swift Boat himself, he doesn't know anything but power-politics and slashing his way through a campaign.

WillH, it is your side that's deliberately politicizing climate science and scientists right to explain their science in a complete and clear manner.  It's politics that's out-screaming their rational message with manufactured scandals and misrepresenting what climate scientists have actually been saying and doing.

Then you crank it up another notch branding me an "environmentalist."

Ah what a fantastically contrived Republican attack tactic that one is.  Hate the environmentalist, the tree hugger, the people who care about this planet from which we evolved and upon which we depend for our sustenance and quality of life.

Why despise the people who recognize that humans and society are dependent on a healthy biosphere, clean air and water and space to move?  Why hate the people who want to slow down the relentless destruction of the very resources that all of us and most especially our children depend on?

Why all the self-destructive paranoia and contrived hatred for everyone who believes differently than the Republican/libertarian mindset?  What's with using every advantage modern science has to offer when it comes to your profits and comforts - but then ridiculing, attacking and ignoring those segments of the same solid scientific community who's information is inconvenient for your self-centered expectations?  It's childish and ultimately self destructive... and that we are really doing this to ourselves is beyond comprehension to me.

Will, as for my essay,
Concerning Our Failure to Appreciate the Weather
By Peter Miesler • 20 October 2015 • The Humanist
http://thehumanist.com/magazine/november-december-2015/up-front/concerning-our-failure-to-appreciate-the-weather

Allow me to run through my main points.

To begin with, it was a reflection on "An Essay Concerning Our Weather" written in 1995, which itself was my reflections on the previous couple decades of weather/climate/scientific/political history.

The first essay was inspired by a cartoon in the Denver Post by Mike Keefe, this revisit was built around the cartoon with speculation on what was going through the cartoonist's mind.  I'm gratified to have Mike assure me I got it. 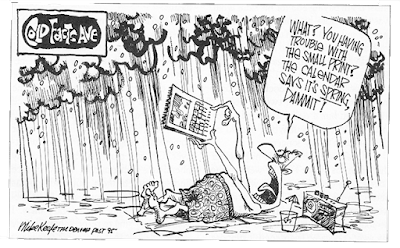 used with permission from Mike Keefe

I explain the basic outline of what's understood about our climate system and what increasing our atmospheric greenhouse gases, (read global insulation), will be doing to our planet.  The Keeling Curve is certainly not politics, nor is the paragraph describing our planet's changing CO2 levels and likening it to one of our climate engine's regulators.

Then a brief outline of, what for that time, were a foreboding string of extreme, even unprecedented, weather events over the previous couple decades.

"The stark historic reality was this: power down or radically alter our planet’s global climate system and the biosphere upon which we all depend. Yes, that meant consuming less and in smarter ways. It also meant burning less fossil fuels and making fewer babies."

Then the politics - "Republican and libertarian players took advantage of the power of cognitive dissonance and created a network of right-wing think tanks and PR fronts. ..."

"Instead of promoting curiosity or interest in learning about what was happening to our planet, they created an alternate universe of faux science that conformed to their ideology and to their political and business objectives. To hell with understanding observations and facts regarding Earth."

Now on to how politics bastardized the science -

"Instead of promoting curiosity or interest in learning about what was happening to our planet, they created an alternate universe of faux science that conformed to their ideology and to their political and business objectives. To hell with understanding observations and facts regarding Earth. ...

"The question everyone should have been asking was: “Where did the surface heat go?” The answer turns out to be a combination of oceans and difficulties in deducing the “average” global surface temperature in the first place."

"Another PR ringer is ... is increasingly disconnected from reality: “No single storm is proof of global warming.” ... it ignores the basic physical reality that weather is the tool of our climate and climate is dependent on the composition of the atmosphere.

Climate is a heat and moisture distribution engine. Weather is the physical tool that does the work of distributing the sun’s heat and hot moisture-laden air masses that our equatorial belt is constantly churning out. It follows that no weather event is independent of the overarching warming of our weather-making engine. So, what’s up with the wishful avoidance?"

"We face a make-or-break challenge: Will we grow up and get serious about our impacts upon this one and only, finite home of ours? Will our politicians and business leaders muster the courage to take the threats to civilization seriously?"

Finishing with a bit of a political pitch -


Citizens' Climate Lobby (CCL), for example, is a nonprofit, nonpartisan advocacy group that trains and supports volunteers to engage elected officials, the media, and the public on the need to act to mitigate climate change. They are gearing up for the upcoming UN Climate Change Conference in Paris and need more support. If you care about the health of our planet, here’s your chance to step up and be a global citizen; check out CCL’s “Pathway to Paris” website and lend your support.