The ease with which you two misrepresent the facts in your Wall Street Journal op/ed “Complete Guide to the Climate Debate” is appalling.  Your opening shot reveals a determined self-imposed ignorance regarding the seriousness of today's AGW threat to our planet's life support system that demands a pointed rebuttal.

You write:  "In February President Obama said, a little carelessly, that climate change is a greater threat than terrorism." What do you mean?  "A little carelessly"!??  Where do you two get off belittling the physical reality and future consequences of ongoing documented trends?  You willfully ignore decades worth of global news so as to remain "innocent" to the evolving situation.
(At the end this letter I share a response to the op/ed's lies from 7 leading climate scientists.)

Any objective awareness of the evolving world news would make you understand that I could fill pages with examples of such monstrous real world threats from our warming and rapidly evolving global climate system - threats that far outweigh our self created and fueled, terrorist problems. 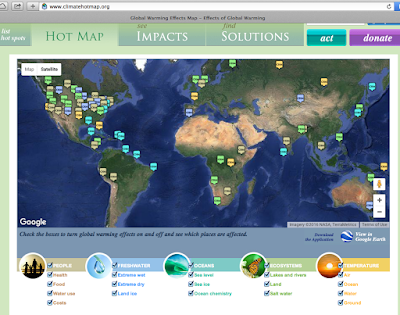 http://www.unisdr.org/2015/docs/climatechange/COP21_WeatherDisastersReport_2015_FINAL.pdf
The Centre for Research on the Epidemiology of Disasters (CRED)
CRED’s Emergency Events Database (EM-DAT)
The UN Office for Disaster Risk Reduction

A warming planet promises threats for our modern top heavy society, that only an appreciation for it's complexity will allow one to grasp.  Sadly your Republican/libertarian PR Machine has been very successful at confusing and dumbing down the public.  When honest education is what's required, you conjure fairytales, hostility, lies, bullying and slam your minds shut.

It is simply ludicrous pretending our weather doesn't have a deep impact on the wellbeing of our economy at every level, from agriculture, to transportation, construction, communication, the power-grid, even your beloved military-industrial complex and beyond.  Not to mention our own wellbeing as we go about our day to days.
Future, too hideous to imagine?  After half a century of knowing, yet doing nothing but pursuing personal greed and powerlust, no doubt.

Still, our global heat and moisture distribution system can't behave any differently.  It's a geophysical thing.

Neither fancy-word-dancing, ideological hatred, or the God of ancient tribal texts can do anything about it.  We've done this to ourselves and it's ours alone to deal with.  Pretending it's not happening won't help.

More heat in the system, more water in our atmosphere, plowing into more concentrated weather systems, by an increasingly erratic Jet Stream pushing and pulling droughts and deluges, occasionally forcing hot air masses to punch their way into the Arctic, thus forcing intensified, if short lived, 'Arctic excursions' into temperate zones, with all their destructive cascading consequences.

This is not a perhaps of the future - this is here and now.

Grow up already!
Sequestering yourselves within your exclusionary echo-chamber and blinding yourself to most of the evidence out there,
won't make it go away!

The opinion piece published in The Wall Street Journal by Matt Ridley and Benny Peiser (“Your Complete Guide to the Climate Debate” Nov. 27, 2015) is riddled with false statements, cherry-picked evidence and misleading assertions about climate science, according to an evaluation by a dozen scientists.

The article attempts to throw clouds of uncertainty around the hard facts about climate change that are agreed to by the scientific academies of every major country in the world and the vast majority of the world’s climate scientists. Here are just a few examples:
Ridley and Peiser are correct that the challenge of decarbonizing the world is enormous. But obfuscation about strongly supported scientific facts is not the solution.

For more details about the scientists’ responses to claims made in this op-ed, please read our detailed analysis. (http://climatefeedback.org/evaluation/analysis-of-matt-ridley-benny-peiser-your-complete-guide-to-the-climate-debate/)

http://www.bbc.co.uk/news/science-environment-35566151
This BBC item would suggest Ridley & Peiser are wrong on the costs and tipping point of global temperature for their economic model.

Thanks Ian,
http://www.bbc.co.uk/news/science-environment-35566151
21st Century US 'dustbowl' risk assessed
By Jonathan Amos - 13 February 2016
"He has been taking part in a discussion session on so-called "food shocks", where the failure of key crops can lead to rapid global price hikes. ...
Dr Elliott is a member of a joint US-UK taskforce that last year assessed the resilience of the world's food system. The fall-out from extreme weather was deemed to be a major concern, especially if future climate change is not moderated by a reduction in the emission of heat-trapping gases from the burning of fossil fuels.
Looking at the production of the major grains - rice, wheat, maize and soybeans - the taskforce's scientists found that the chances of a one-in-100-year production disruption was likely to increase to a one-in-30-year event by 2040.
Implementing reforms that would enable the system to cope better in the future was seen as a priority. …"

It worth mentioning that I emailed both Ridley and Peiser and have received no response.
They are all about yodeling for a circus "debate" in the media
but when someone challenges them to constructive debate based on substance, rather than soundbites…
SILENCE every time.