This project is inspired by the incredible number of malicious frauds who continue loudly broadcasting that CO2 is failed science and a big hoax.  They deliberately never slow down long enough to think through how utterly ludicrous their paranoid self-certain conviction is. 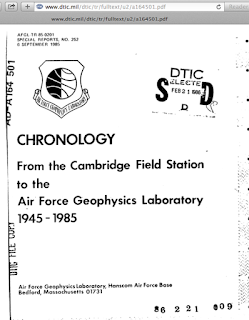 I can be certain of this, even if I'm not an expert, because of all the functioning modern marvels that would have been impossible without that understanding being correct!  Not to mention the insanity of thinking such fundamental nature can be hoaxed away, when thousands are studying it.

I share the following quotes in the hope some may find it a useful tool for digging up more information about early atmospheric studies (Incidentally, such atmospheric research wasn't confined to the USA, Australia, USSR and others, were also solving these fundamental 'mysteries' in order to get on with achieving mastery over weaponry, which they certainly achieved.

Interestingly, the geophysical understanding developed independently by each nation, totally agreed with each other.  Funny that.)

This page looks like a fun tool, for those who have the understanding.
http://climatemodels.uchicago.edu/modtran/
And those of us who don't, aren't in any position to second guess the experts, cut it out already.
Posted by citizenschallenge at 11:06 AM

With a slip of the finger I deleted one of the coolest comments I've received. Here's a cut and past from my notice:

Thank you for this post!
My Father was one of the handful of scientists that work at Cambridge Research Lab for 35 years.
He would be laughing at these fools that think climate change is a hoax !

Thank you for taking the time to share that.
I don't suppose he ever wrote a journal or some articles in later years?

I would love to find some personal recollections from that era.

ANYONE HAVING PERSONAL KNOWLEDGE OF THE CAMBRIDGE RESEARCH LAB,
OR ANY WRITTEN RECOLLECTIONS,
PLEASE CONTACT ME AND SHARE.

This is Tom Markham Jr, Jeff Markham commented earlier. Yes our dad did write an article in Scientific American. Will have to try to find it but I don't recall the subject matter. Thanks, Tom Markham

I'd love to get more, right now I'm running off to a job, but did a quick google and found your dad's obituary

He was a submariner too, wow, now that takes some right stuff.