This is the third installment of my dissection of 1000frolly's malicious nonsense in his 1/25/16 YouTube video, "NASA - The "Mystery" of Antarctic Cooling," for an introduction please refer to the first installment.

This continues where #2A and #2B-footnotes left off.  Frolly is still trying to sell his cosmoclimatology while taking a few swipes at the IPCC.  This post contains his words with my commentary and footnote numbers.  I've created a second document (#3B) with footnotes that support my critique.  Ideally you can open both and view them side by side.

16:30 - Because all this happened before human activity could have influenced the climate. {Ergo, human's can't change climate?
Frolly, do you actually believe that?

CO2 is known to have impacted climate throughout Earth's history, to think that humans injecting more than 2 gigatons month, after month, after month isn't going to have an impact?   I mean, that's like crazy.  see #15} So we know there was a mechanism and this mechanism is related to cosmic ray cloud interactions.  {NO. A lot of arm waving, but no mechanism was described or demonstrated.}

Now, here is a paper Usoskin,Solanki, Kovaltsov published in 2008 ("Grand minima and maxima of solar activity: New observational constraints") which shows that the last half of the 20th century we had the highest solar activity for eleven thousand years.  This is called a grand maximum, four hundred years ago the sun was at a grand minimum, now it's at a grand maximum., and that grand maximum, with the amplifying mechanism of cosmic rays and clouds has driven the current global warming. {What amplifying mechanisms?  It's a rough correlation between the sun's activity and galactic rays, that's it.  Besides, it tells us nothing about cloud formation.}  (Usoskin et al. 2008 sunspot graph)

Now, just for those of you who are strong believers in the CO2 nonsense {You're deluded.  It's fact.  see #16} I'll just recap a little bit and show you a couple more bits of data about the link between low cloud cover and galactic cosmic rays.   {But you never established any link in the first place!  This is science by rhetoric, not real science.} Here's the cosmic rays in the lower troposphere and in blue is the low cloud cover, perfect correlation.  {Correlation is not causation - particular not when bias driven cherry picking and curve fitting are involved.} 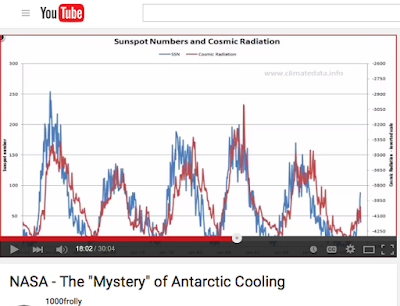 18:00 - Here we have a perfect correlation {"perfect" always that self-certainty.  You'll never find that among serious scientists and experts.} between sunspot numbers and cosmic radiation. (www.climatedata.info) 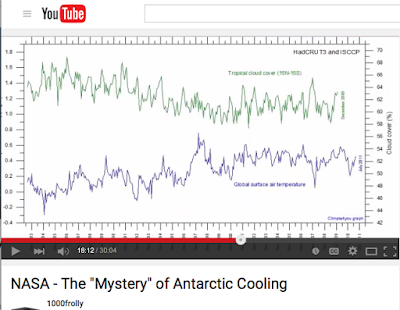 So during that time cloud cover fell from 66% to 60% which is a large change, increased the solar forcing to the surface.  Of course, the CO2 dogma {You mean overwhelming evidence you choose to mock.} which says exactly the reverse, that the lessening cloud cover is due to increasing co2 and warming.  So the mixing of cause and effective, they've got it backwards. {No it doesn't.  see #18}

Because of course there's no money available to research solar activity in relation to the climate {conspiracy ideation and false} Only co2 is funded 100% co2 is funded. {Nonsense - frolly is a liar. see #20} The IPCC only acknowledges one solar cycle. {But you just said, "IPCC totally ignore the sun" - besides, see #21} It says only one solar cycle the eleven year Schwabe.  In reality these are the known solar cycles, all from the literature. {and all longer cycles are irrelevant to today's climate situation.}

19:47  Of course, when you're totally blinded like this, how can you do science properly. {An example of acting a full on jerk and a liar.  Frolly every consider you've blinded yourself?} Now, as I said before all I can do is skim through climate here, climate is very very complicated {Yeah, that's why it takes decades of dedicated study and productive work output to become a recognized expert in the field.  But armchair geniuses like frolly think part-time casual interest is enough to judge experts.} as you know but high clouds generally warm the planet, low clouds generally cool the planet by reflecting short wave solar radiation.  {Hello frolly, unless of course it's night time, then low clouds warm the surface by acting as an insulation layer and slowing heat's escape.}

21:30  -   Now for this theory of cosmo-climatology which main stream scientists have apparently hardly ever even heard of. {They've heard of it plenty.  But, they've also dismissed it because it doesn't add up.  see #22} You've got three brilliant {In frolly's politicized biased estimation.} professors of science, we have to thank for this. Nir Shaviv is the first one, astrophysicist working on long scale climate cycles, Ján Veizer of Canada's another brilliant  professor he works with brachiopods.  He uses brachiopods to reconstruct the tropical temperature records from hundreds of millions of years ago then of course, and of course, here we've got Svensmark who is working here with Pieterson on the cloud chamber in Copenhagen.

It took them years to raise this tiny amount of money required to carry this experiments.  Incredible how non CO2 research is just not funded. {Perhaps it was a reflection of the unimportance of this line of investigation.  Besides they got the money, quit the belly aching.} Here's a result of Svensmark cloud chamber which basically shows the nucleation can occur {Yeah, ultra tiny particles, under totally controlled conditions, sans the presence of natural aerosols.} in the atmosphere caused by cosmic ray interaction so eventually you could see aerosols forming and sow clouds.

Once again frolly is trying to declare a home run, even though his Svensmark barely touched first and never got close to second or third.  The experiment was in a highly controlled cloud chamber - nothing in the real atmosphere has been demonstrated or observed.  It pure biased conjecture.  see #22

Next frolly returns to Antarctica, so it seems a good place to call it quites for this segment.

Also see:
This is what a scientist sounds like, Dr. Randall on Clouds and such.

Posted by citizenschallenge at 11:37 PM

This is part of a series:
(1) Profiles in Malicious Deception - 1000frolly