Since Mr Steele went out of his way to remind my readers of his angry guest essay over at Anthony Watts' WattsUpWithThat, (the guy who inspired me to start this 'study' blog).  I went and revisited Jim's January 2015 "essay."

Rather than focusing on a systematic review and refutation of my claims and pointing out perceived errors.  Steele launches into a personal attack, using every devious trick to demean me and my motives.  He wouldn't dare admit to himself that I'm a respectable, intelligent man with honorable intentions.  Nah, it doesn't work that way in their rule book.

Eventually he does get around to some issues, but even there, it's so weighted down with pissy rhetoric and in fact some more examples of misrepresenting and slandering a respected productive serious scientist, it all serves to underscore Mr. Steele's disingenuous motives.

I share some highlights from Mr. Steele's essay that demonstrate what I refer to as science by slander and science by rhetoric: 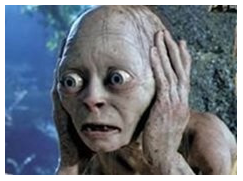 a “whacko”,
skeptic basher,
The “whacko” blogger,
blog spawn,
dedicated to assassinating the character of any and all skeptics,
{Actually to expose their base deceptions}
rabid and dishonest of all blogger,
demented obsessions,
alarmists,
precious gloom and doom,
his tirades,
his vacuous tactics,
Gollum-esque traits,

The poet William Shenstone wrote, “A liar begins with making falsehood appear like truth, and ends with making truth itself appear like falsehood.” {A perfect description of what the climate science contrarian movement has done.}

CC's is now on a mission to transform any and all skeptic truths into a falsehoods,  {Actually it's about exposing the falsehoods of the Republican/libertarian's contrived "skeptic truths"}

But suggesting no climate doom for Emperor Penguins threatened CC’s “precious” beliefs and like so many alarmists, CC refuses to accept any documented facts that “global warming” is neither global nor harmful. {I refuse to accept misleading and false claims.}

All organisms act locally and the global warming statistic is a chimera of many local dynamics.,

Yet in total denial, CC seeks refuge in the delusion that DuDu’s temperature trends are just a skeptic’s trick.,

Otherwise devotees of gloom and doom will continue to be misled.
fallacious alarmism, 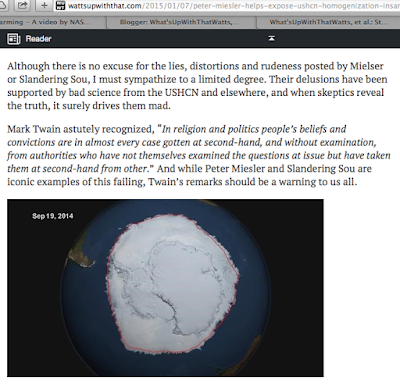 {No excuse for the lies, distortions and rudeness.
Jim, I'll quote you on that.
Oh, and what in the world is that pic of ice extent supposed to prove?}

When I started blogging, I was all about engaging people and sharing the discoveries of climate science.  Then I was amazed at how invested people were in their egos and the fantasy that they were never wrong - then that rageful resentment at ever being questioned, let alone corrected.  Can't quite wrap my head around that.  Being wrong is part of learning and growing, nothing to take offense at, it's something to learn from.

None of us is always right.  Think about USA's founding fathers, as diverse and personally ambitious a group of men you'll every find.  But, they got along enough to make it work because everyone had an inner appreciation that no matter how sure of themselves they were, they needed their opponents to balance the process.  They appreciated the truth that we need each other to keep ourselves honest.  That's why they were successful in creating a new nation.  What's sad is so many people fancy that those men and their government made this country great - when in actuality is was the land that made us great.  We will rue not grasping that reality.  But, I digress.

Then I discovered just how profoundly disconnected many have become from the most basic realities of our physical planet.  With time I began to appreciate the depth of the mental/emotional fortress people have built around themselves.  It dawned on me how much of that isolation was rooted in anger, fear, confusion at the American dream gone sour, and cemented in a lack of education and curiosity.

Nowadays, more and more I'm thinking of the few, the young, the brash, the indomitable, the realists who understand serious science, who also have a personal connection to and appreciation for this fantastic planet that created us.  The ones who understand what we are doing to ourselves and this society, and a future increasingly dismal and slowly, but irresistibly, evolving into the untenable.  The ones who have a sense of what they will need to negotiate in the not distant enough future.

I worry that perhaps the only thing I have to offer them is a clearer picture of the hopelessness of dealing with the faith-shackled, (be that faith in ancient tribal texts, or economic interests and power, it's all the same self destructive game.).

In any event, Mr Steele is back and wants to play, I will oblige.  First by reposting a series of responses I offered in the aftermath of his January 7, 2015 essay.  Then, after I get back to and finished with 1000frolly's video, I hope to return with a concise bill of particulars based on my previous reviews of Mr. Steele's Heartland interview and IEEE climate horror talk.  Then maybe I can finally get back to something fun like drkstrong's videos.

Jim, we shall demonstrate which of us represents serious fact-based science, as opposed to echo-chamber science by rhetoric.

Posted by citizenschallenge at 8:48 PM