Projects are never finished, we just meet deadlines and I'm out of time.  Little rough, but what else is new, still I want to get it out there, it’s an ongoing project and part of it is trying to convey some ideas that I believe are important and that deserve more attention.

Fundamental to my perspective is the appreciation that there is a profound difference between Personal Truths and Universal Truths.

Personal Truths govern matters of the human heart and soul.

Keep in mind that unless you believe in the notion that Earth was created in six days, six thousand years ago, you must realize that humanity’s presence on this Earth is but a minuscule flash in the history of our miraculous planet, which will continue long after we have extinguished ourselves.

Holy Books are shadow plays.  They are tribal stories professing personal truths that concern the human condition and our own personal journeys as we proceed through our numbered years while grappling with our inescapable ultimate fate.

Holy books with their colorful imaginations and big expectations are measured in centuries.  How can they possibly represent the God of Light and Time, Creation and Love, an entity who’s awareness spans thousands of millions of years and hundreds of thousands of generations of life on this planet?

Human religions speak to the Human Condition.  They are real, they are valid, but they are also narcissistic and blind to the greater reality of the natural world that surrounds* us.  In fact, the world that created us.  (*Guess, not so much anymore, given the population explosion and mega-megalopolis where people are herded together into pens, far removed from the natural world that sustains all of us.  That is the biosphere that we are devouring at an unfathomable rate.)
That is the realm of Personal Truths.

Universal Truths
have to do with physical reality.
God’s stage so to speak.

Universal Truths govern the geophysics and biology that made Earth the boundless cornucopia that humanity was born into not all that many generations ago.

Science is the self-critical system intelligent humans with a thirst for understanding the world around them established in order to keep themselves honest.  They have achieved incredible insights because Earth is no trickster, unlike so many of the gods humans obsess over.

The scientific community is composed of intelligent, all around skeptical, (that would include self-skepticism), critical-thinking, informed, competitive individuals spanning the globe and generations.

Mr. Smith in contrast is the man with the following financial statement and a faith that maximizing profits and earnings is about all he’s concerned with. 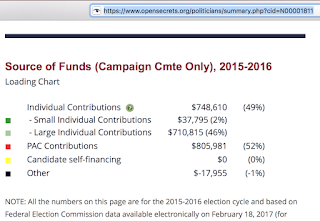 Back to Lamar's press release 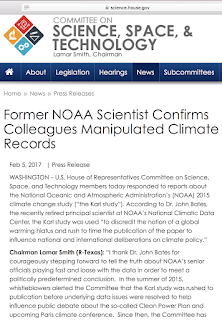 Think about it, Lamar doesn’t have any fact based arguments
It always comes down to word plays and distorting reality into what he wants it to be.

Lamar Smith and the GOP contrarian process:
fabricate scandals intent on
demonizing opponents with a,
nonstop injection of hostility,
personal assumption morphed into self-certain facts,
refusing to listen to correcting objective facts,
conjuring paranoid fantasies without evidence,
dependence on fancy-dancing-words and Orwellian Doublespeak,
wants us to believe all these scientists are in on deception,

It’s telling the forces that have propped up Rep Lamar Smith have needed to also create a faux climate science community, hermetically sealed against all opposing critique and evidence to retain their hold
.
Deny, deny, deny.  Ignore, ignore, ignore.

There are Personal Truths and there are Universal Truths.

Science is the path to understanding physical universal truths.

Science is predicated on the understanding:
We Need Each Other To Keep Ourselves Honest.

Self-certainty strips the ability to learn
from new relevant information.

Lamar Smith's record reveals him to be a passionate partisan, a tea-partier who has long been focused on politicizing and rejecting the scientific process.  He and the GOP cling to their global hiatus illusion like scared children to their blankets.  It’s disconnected from physical reality.

{7}    Seepage: The effect of climate denial on the scientific community
By Stephan Lewandowsky | May 7, 2015
Professor, School of Experimental Psychology and Cabot Institute, University of Bristol
http://www.shapingtomorrowsworld.org/lewandowskyseepage.html

To be clear, the GOP’s “notion of some global warming hiatus” is the product of a very smooth PR campaign, it is a farce, a figment of the imagination and a gauge of profound ignorance toward our physical planet.  At best we were looking at a temperature observation and processing issue.

What they refuse to grasp is that it’s our atmosphere doing all the heavy lifting when it comes to warming our Earth!

That insulating action is happening 24/7/365.25, with accumulating interest, so to speak.  Scientists and engineers figured this out to exquisite detail in the 50/60s.  We use many modern marvels that depend on the absolute mastery of this radiative reality that keeps our planet livable against a frigid universe.

Rep. Smith and fellow stalwart Republicans, stop refusing to honestly learn about that fundamental ‘first base’ understanding that’s required before any of the rest of it can make sense?

CO2 Science - Why We Can Be Sure.
http://whatsupwiththatwatts.blogspot.com/2016/12/co2-science-just-facts.html

Ignore all the evidence you can.   Play all the rhetorical games you can dream up.

Still, the inescapable fact is that at ~180 ppm our planet has ice sheets covering its continents, at ~280ppm we got the nice temperate climate regime that nurtured and enabled our crowded society to evolve.  Now we have cranked that atmospheric insulation regulator up past 400ppm and counting.  Do the math!  One doesn’t need super fine details to ‘get it’ - one simply needs the curiosity and the intellectual honesty god gave all children.  Scientists still possess that, while the GOP has lost it to egomania and fear of all they don’t know.  Those are not the qualities that make for good leadership.

Where in the world do Republicans get off pretending our massive fossil fuels burning isn’t going to have substantial and disruptive impacts on the natural systems and cycles that we depend on for everything?  And that those in turn won’t severely impact human lives and infrastructure that we all depend on?

Bates’ complaint is about archiving procedure.  Bates thinks important observation data must be aged like some great wine before it can be made available.  It’s the approach of someone who has something to hide.  Science is about trying to understand our climate system.  Data is for sharing in a timely manner.

Silly rabbit.  Bates is the bad guy, with the bad idea.  But it’s another straw for the contrarian campaign to embrace, thus this obscure librarian has been embraced by the Republican campaign of scientific confusion and stupefaction and their hero of the moment.  YouTube is being bombarded.

As for unresolved data issues, that’s how it is with Earth, Ocean and Satellite data collection which is very complicated with many areas of potential mistakes.  That’s why observation instruments keep getting better as the machines and procedures keep getting better by learning from mistakes and refinements based on lessons learned.

At this point the remaining data issues amount to minuscule adjustments to the numbers.  This vicious malicious campaign of GOP Doublespeak is disgraceful and should stop being tolerated.

Recent Ocean Warming has been Underestimated

… this begs the question:

Or, is Bates’ concerned with delaying release of scientific information as long as possible?

OR was it simply self-serving opportunism?

{5}   Warren Cornwall:
Instead, the dispute appears to reflect long-standing tensions within NOAA's National Centers for Environmental Information (NCEI), based in Asheville, North Carolina, over how new data sets are used for scientific research.

Incidentally, a 30 point complaint has been filed by Grantham Research Institute with the Independent Press Standards Organization for gross misrepresentation of the facts in the Mail's Feb 5th article written by David Rose.
http://www.lse.ac.uk/GranthamInstitute/wp-content/uploads/2017/02/Mail-on-Sunday-follow-up-February-2016.pdf
Posted by citizenschallenge at 4:42 PM