It has been claimed that the early-2000s global warming ‘slowdown’ or ‘hiatus’, characterized by a reduced rate of global surface warming, has been overstated, lacks sound scientific basis, or is unsupported by observations. The evidence presented in a new commentary in Nature Climate Change by Fyfe et al. contradicts these claims.
The new Fyfe et al. paper is mainly in response to Karl et al. and Lewandowsky et al., who made the following statements in their abstracts:

“These results do not support the notion of a ‘slowdown’ in the increase of global surface temperature” – Karl et al., 2015, Science 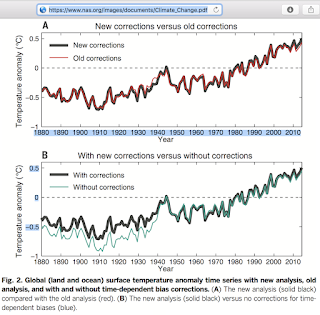 “there is no evidence that identifies the recent period as unique or particularly unusual” – Lewandowsky et al., 2016, BAMS

Firstly, climate scientists agree that global warming has not ‘stopped’ – global surface temperatures and ocean heat content have continued to increase, sea levels are still rising, and the planet is retaining ~0.5 days of the sun’s incoming energy per year. …

The only evidence that the early 2000s were unusual that I can find is your graphs and after reading the Tamino article I understand those need to be taken with a grain of salt.

A new paper by Fyfe et al. speaks with apparent certainty of a “slowdown” in the rise of global mean surface temperature (GMST).  What it doesn’t give is any real evidence of it.

“In all three observational datasets the most recent 15-year trend (ending in 2014) is lower than both the latest 30-year and 50-year trends. This divergence occurs at a time of rapid increase in greenhouse gases (GHGs). A warming slowdown is thus clear in observations; …”

The three observational data sets are from HadCRU, NOAA, and NASA.

There’s practically no actual analysis of the trends which are computed. For instance, there’s no mention of their estimated uncertainty. But such estimates are crucial to determining whether observed differences in trends over different time intervals have any meaning beyond inevitable random fluctuation.

I computed the trend …


That doesn’t mean there isn’t value in this paper, in fact I think there’s a great deal. They discuss such important issues as the nature of decadal variation, the influence of exogenous factors like volcanic eruptions and solar variations, and in particular ocean-atmosphere interactions. Understanding those are of great value, in fact I suspect they’ll be indispensible for furthering our ability to know what to expect in the future. They also highlight the nature of divergence of observed surface temperature from model trends, the understanding of which we can’t really do without. ...
https://tamino.wordpress.com/2016/02/25/no-slowdown/

So please Ed, what other evidence do you have that this period was “unusual”?

Well other than the increasing tempo of life and infrastructure destroying weather events and disturbing developments on the Antarctic and Greenland and tundra, jet stream getting pretty weird too, and go figure it’s all part of a coherent understanding.

Probably the underlying rate hasn’t changed, but the reason for all this research has not really ever been the magnitude of the trend, it has always been about the divergence between the simulations and observations. Remember that the older datasets used at the start of all this (i.e. ~2007) showed slightly less warming (e.g. HadCRUT3). It was only much later (2012-2014) that e.g. Cowtan & Way and improved coverage in HadCRUT4 and other dataset updates, brought the models and observations closer together.
______________________________________________________
It sounds like all you are doing is working on an interesting intellectual problem.  As though you have all the time in the world and the only thing that matters is trying to push the accuracy out past the decimal point as far as possible.

Ed, do you ever stop to think you are dealing with the real life future of human society?  We got a Senator who forced Hearings over this little analytical “Global Warming Hiatus” political game for experts. Even though you admit the over all trend continues up at a steady pace.  What are you doing man?  What is your game?

I remind you because of this statistical game, we got people plastering the internet, repeating the Republican brainwashing campaign that climate scientists are liars and cheats.  Dr. Hawkins you aren’t adding anything constructive - you are aiding and abetting vandals and deliberate lies and you should be ashamed of yourself.  You aren’t innocent and your sanctimonious professions of wanting to aid the understanding are cow pies, I’m not buying and no else should either.

While you are arguing that .02° deviation is something significant to occupy everyone's attention -The Antarctic turns out to be reacting significantly both around West Peninsula, and also the East continental massif.  The Arctic Ice Cap continues melting with all the cascading consequences that promises.  Greenland is just as scary, so don't tell us your focus on interpreting fine mathematical details is more significant than facing the signs of warming’s present impacts upon our biosphere? (That would be our life support system don't you know.)

Your obsessive focus on statical challenges, implies that on a deep level you may have succumbed to the hubris that our understanding creates our reality.  Therefore by playing games that distract us from facing the physical truth unfolding before us, you are somehow forestalling it.  It ain’t so big guy.

Your self serving article and your oh so polite juggling during the comments was interesting but unpersuasive.  So sad, what we need is scientists capable of communicating an understanding of this global system we are dependent on, not more crazy-makers.  This handwringing about the hiatus is a waste of good minds and precious irretrievable time.  Seems like another tragic example of “Seepage” run amok to me.

Seepage: The effect of climate denial on the scientific community

By Stephan Lewandowsky
Professor, School of Experimental Psychology and Cabot Institute, University of Bristol
Posted on 7 May 2015
Filed under Climate denial

The article “Seepage: Climate change denial and its effect on the scientific community” just appeared in Global Environmental Change. The article is authored by me and Naomi Oreskes, James S. Risbey, Ben R. Newell, and Michael Smithson.
It is open access and can be found here.

Seepage: The Executive Summary
We initiate our argument with the known fact that vested interests and political agents have long opposed political or regulatory action in response to climate change by appealing to scientific uncertainty. We know from earlier work that uncertainty is no cause for inaction—on the contrary, greater scientific uncertainty should make us worry more, not less, about the potential consequences of climate change. Alas, those actual scientific implications are often inverted in public discourse where uncertainty often invites wishful thinking and hence inaction. In this new article, we examine the effect of contrarian talking points that arise out of uncertainty on the scientific community itself. We show that although scientists are trained in dealing with uncertainty, there are several psychological and cognitive reasons why scientists may nevertheless be susceptible to uncertainty-based argumentation, even when scientists recognize those arguments as false and are actively rebutting them. ...

Posted by citizenschallenge at 10:10 PM

What's most amazing to me is that these exceedingly difficult technical matters have been turned into a Keep The Debate Alive ruse.

Thus we have the internet full of lay-people being asked to weigh in and judge these matters that belong in the realm of experts.
But, some experts who usual seem of a right wing political persuasion and often with substandard work under their belt (I'm not implying Hawkins, I'm in no position to comment on the quality or direction of his career, nor do I pretend to.) take their technical issues out to an under-informed sympathetic audience - make self-serving one-sided presentation - and pump up the audience that they should decide the merits of issues they don't even grasp, let alone understand enough to judge. All the while ignoring the simple fundamental facts that tell us all we need to understand to appreciate the current course is suicide and that cutting back on emission has become a question of survival, not convenience.

Yup, sure I'm one of the under-educated. But I have self-skepticism along with my confidence. I also have an awareness of my limitations and since I have a sincere desire to learn, I take the time to inform myself best I can. Been doing so for many decades. Oh and when I make errors, it's okay, because those are the best of learning experiences.

While the climate science contrarian PR machine works feverishly to fill their community with a sense of absolutism, superiority and surrounded by enemies. This will end badly.