Keith Peterson - Cambrian - Molecular Clock - What a scientist sounds like.

Professor Kevin J.Peterson gives a fun informal lecture at MDI Biological Laboratory's Science Cafe'.  Besides giving a good overview of the state of our understanding of Ediacaran/Cambrian's radiation event, I like it because of the way he acknowledges the provisional nature of our understanding and the importance of the arguments over the evidence that keep science moving forward.  He underscores how we learn from honestly evaluating our mistakes as much as our successes.  Below the fold I include key screen shots plus information from papers mentioned in this talk.  (For why I'm putting together this collection, please see this.)

The fossil record shows animals suddenly exploding upon the geologic scene around 530 million years ago, forever altering Earth. However, new research suggests that the origin of animals pre-dates the "Cambrian explosion" by almost 200 million years. Kevin Peterson will examine the issues surrounding the origin and rise of animals and address the "missing" Precambrian fossil record, culling data primarily from the molecular record of animal life.

Kevin J. Peterson is a professor of biological sciences at Dartmouth College. He received his undergraduate training in biology at Carroll College in Helena, Montana, and earned his Ph.D. in geological science from the University of California, Los Angeles. His work centers on using molecular tools to address the origin and early evolution of animals. 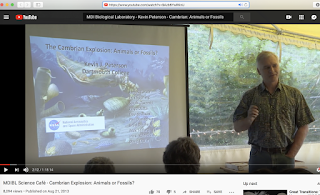 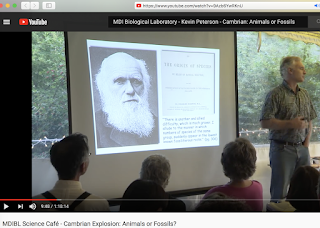 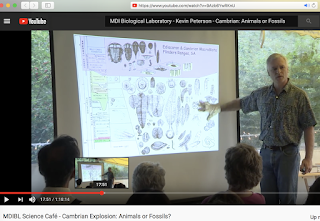 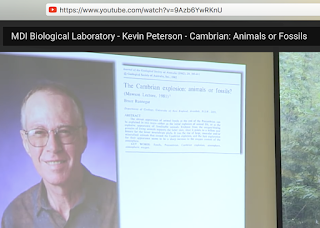 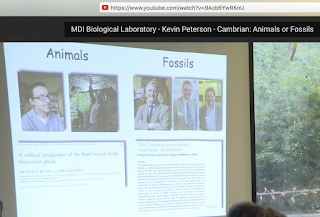 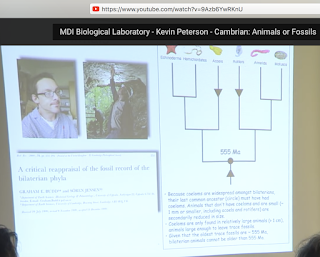 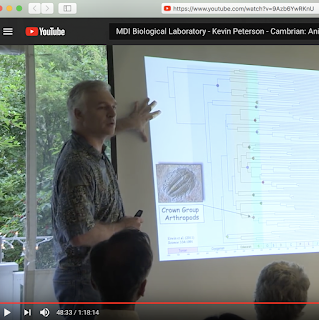 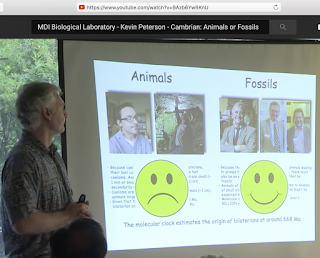 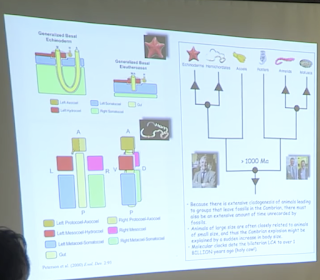 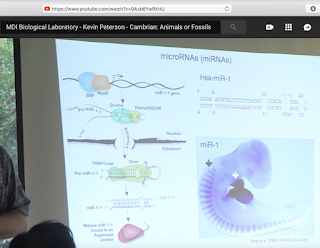 The Roots of Phylogeny: How Did Haeckel Build His Trees?
https://watermark.silverchair.com/52-4-515.pdf 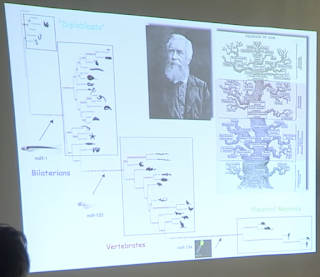 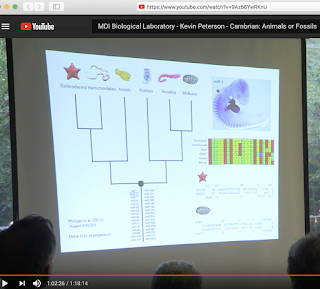 Who would fund this stuff?  Why? 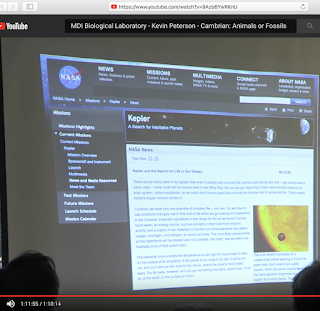 Academic Appointments
Professor of Biological Sciences
Professor in the Ecology, Evolution, Ecosystems and Society Graduate Program
Adjunct Professor of Earth Sciences
The explosive rise of animals 530 million years ago is among the few major events in the history of life combining the evolution of novel developmental regulatory circuitry in the context of unique environmental circumstances. This ‘Cambrian explosion’ is the primary focus of my laboratory, and the cause(s) of the origin of animal body plans and their later ecological success drives our current research.

Kevin Peterson: The Evolution of a Paleontologist
October 20, 2011  by Joseph Blumberg

Peterson mentions Michael Dietrich so I looked him up and what I found belongs in this collection about appreciation our Earth and serious science.
Michael Dietrich - Drawn to Controversy
By digging through dusty storerooms and reading dead people’s mail, science historian and philosopher Michael Dietrich keeps biologists attuned to the past and mindful of the present.

These papers were referenced in the video:

Abstract
It has long been assumed that the extant bilaterian phyla generally have their origin in the Cambrian explosion, when they appear in an essentially modern form. Both these assumptions are questionable. A strict application of stem- and crown-group concepts to phyla shows that although the branching points of many clades may have occurred in the Early Cambrian or before, the appearance of the modern body plans was in most cases later: very few bilaterian phyla sensu stricto have demonstrable representatives in the earliest Cambrian.
Given that the early branching points of major clades is an inevitable result of the geometry of clade diversification, the alleged phenomenon of phyla appearing early and remaining morphologically static is seen not to require particular explanation. Confusion in the definition of a phylum has thus led to attempts to explain (especially from a developmental perspective) a feature that is partly inevitable, partly illusory.
We critically discuss models for Proterozoic diversification based on small body size, limited developmental capacity and poor preservation and cryptic habits, and show that the prospect of lineage diversification occurring early in the Proterozoic can be seen to be unlikely on grounds of both parsimony and functional morphology.
Indeed, the combination of the body and trace fossil record demonstrates a progressive diversification through the end of the Proterozoic well into the Cambrian and beyond, a picture consistent with body plans being assembled during this time.
Body-plan characters are likely to have been acquired monophyletically in the history of the bilaterians, and a model explaining the diversity in just one of them, the coelom, is presented. This analysis points to the requirement for a careful application of systematic methodology before explanations are sought for alleged patterns of constraint and flexibility.

Abstract
The sudden appearance in the fossil record of the major animal phyla apparently records a phase of unparalleled, rapid evolution at the base of the Cambrian period, 545 Myr ago. This has become known as the Cambrian evolutionary ‘explosion’, and has fuelled speculation about unique evolutionary processes operating at that time.
The acceptance of the palaeontological evidence as a true reflection of the evolutionary narrative has been criticised in two ways: from a reappraisal of the phylogenetic relationships of the early fossils, and from predicitions of molecular divergence times, based on six appropriate metazoan genes. Phylogenetic analysis of the arthropods implies an earlier, Precambrian history for most clades, and hence an extensive period of cladogenesis unrecorded by fossils.
A similar argument can be applied to molluscs, lophophorates and deuterostomes. Molecular evidence implies divergence between clades to at least 1000 Myr ago. The apparent paradox between the sudden appearance of recognisable metazoans and their extended evolutionary history might be explained by a sudden Cambrian increase in body size, which was accompanied by skeletisation.
A new paradigm suggests that the ‘explosion’ in the record may have been decoupled from the evolutionary innovation.

Abstract
For more than a generation, molecular biology has been used to approach palaeontological problems, and yet only recently have attempts been made to integrate research utilizing the geological and genomic records in uncovering evolutionary history. We codify this approach as Molecular Palaeobiology for which we provide a synthetic framework for studying the interplay among genotype, phenotype and the environment, within the context of deep time.
We provide examples of existing studies where molecular and morphological data have been integrated to provide novel insights within each of these variables, and an account of a case study where each variable has been tackled to understand better a single macroevolutionary event: the diversification of metazoan phyla. We show that the promise of this approach extends well beyond research into the evolutionary history of animals and, in particular, we single out plant evolution as the single greatest opportunity waiting to be exploited by molecular palaeobiology.
Although most of our examples consider how novel molecular data and techniques have breathed new life into long‐standing palaeontological controversies, we argue that this asymmetry in the balance of molecular and morphological evidence is an artefact of the relative ‘newness’ of molecular data. In particular, palaeontological data provide unique and crucial roles in unravelling evolutionary history given that extinct taxa reveal patterns of character evolution invisible to molecular biology. Finally, we argue that palaeobiologists, rather than molecular biologists, are best placed to exploit the opportunity afforded by molecular palaeobiology, though this will require incorporating the techniques and approaches of molecular biology into their skill‐set.

‘I like to take the catholic view that palaeontology deals with the history of biosphere and that palaeontologists should use all available sources of information to understand the evolution of life and its effect on the planet. Viewed in this way the current advances being made in the field of molecular biology are as important to present‐day palaeontology as studies of comparative anatomy were to Owen and Cuvier …
Posted by citizenschallenge at 12:43 PM