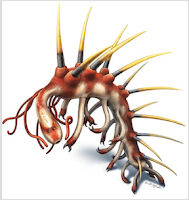 Before moving beyond the Edicarian and Cambrian Periods I want to finish with this wonderful talk by an enthusiastic paleontologist, Dr. Martin Smith’s.  He’s done some incredibly work detailing an accurate anatomy of that most exotic of poster species Hallucigenia, among others.

His guileless enthusiasm for the fascinating details his work has helped uncover is a treat to behold.  Just as interesting is his descriptions of the debates and questions that scientists wrestle with as they strive to arrive at conclusions and work towards a general consensus, or keep on searching.  Below the fold I include screenshots and further information regarding Dr. Smith's work.
The origins of Ecdysozoan body plans
https://www.youtube.com/watch?v=siuVg90-VJE


By Dr. Martin Smith, Durham University - talk given at University of Bristol

The sudden appearance of diverse animal ecosystems during the Cambrian explosion some 530 million years ago remains one of the most enigmatic transitions in evolutionary history.  Almost all of the modern animal body plans are represented in exceptional Cambrian deposits such as the Burgess Shale – as do a suite of alien-looking animals that seem to have no place in the metazoan tree of life.

Until recently, these latter oddballs have been considered as “extinct phyla”, evolutionary dead ends that testify to a lost richness of biological possibility — but shed little light on the abrupt origins of modern groups.

But all life belongs on a single tree, and emphasizing the similarities between evolutionary outliers and modern taxa can add otherwise unattainable resolution to the deepest branches of the tree of life.  Indeed, the unconventional combinations of characters that make certain taxa so perplexing can, when successfully interpreted, illuminate the incremental evolutionary pathways that led to the gradual assembly of modern body plans.

The celebrated Burgess Shale beast Hallucigenia epitomises this paradigm shift: previously interpreted upside down and back to front, it has now proven the key to unlocking the affinities of the ‘lobopodian’ body plan.

The lobopodian ‘phylum’ is not a clade but a grade: suggesting that an emphasis on Linnean taxonomy may overstate the magnitude of the Cambrian explosion.  New anatomical details in Hallucigenia, interpreted in a rigorous homology-driven framework, allow the reconstruction of key transitions in the earliest evolution of the moulting animals (Ecdysozoa) — establishing how this, the most successful subdivision of the animal kingdom, rose to prominence in the Cambrian explosion. 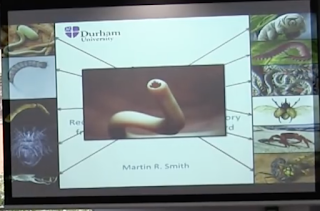 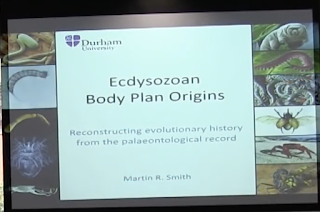 What the fossil record can tell us. 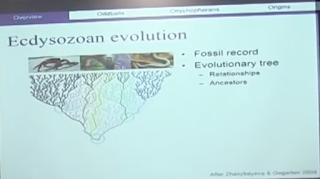 At five minutes he describes the Cambrian Period being misinterpreted since Victorian times
and that there's a rich biological history preceding the Ediacaran and Cambrian periods
by hundreds of millions of years, one that is only beginning to come into full focus.
Martin's talk details some of the arguments and discovers of that effort. 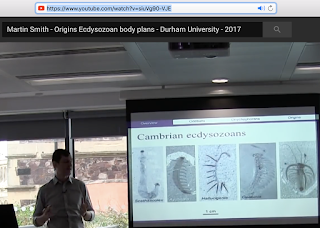 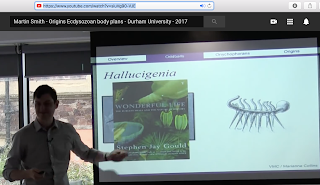 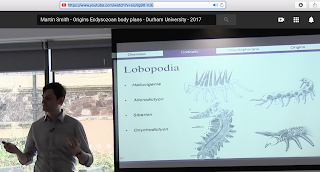 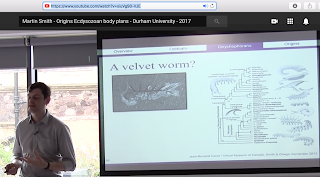 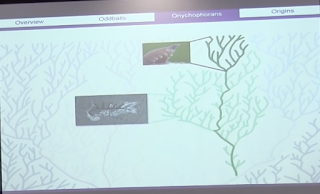 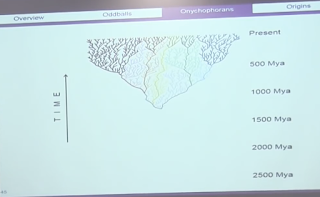 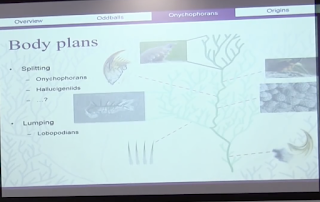 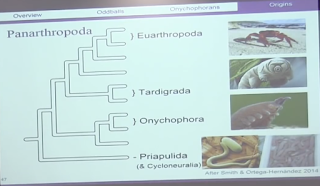 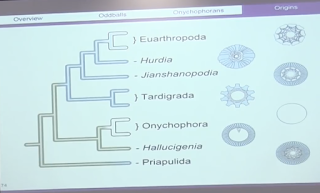 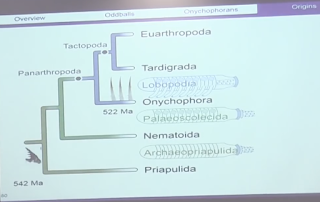 June 24, 2015
Ancient mini-monster head mystery solved – here’s how we did it
Martin R. Smith, University of Cambridge
A microscopic set of teeth helped scientists realise they had been looking at fossils of Hallucigenia back to front.


A bizarre 500-million-year-old “worm with legs” has finally found its rightful place on the evolutionary tree of life. Fossils of Hallucigenia look so odd that scientists couldn’t make head or tail of…
Posted by citizenschallenge at 9:01 PM