I'll admit I've been curious when the Russian's interest in my blog would reawaken.  It wasn't until the last few days that there was a renewed stirring, but today it hit.  I don't know what it means, but I believe it is worth documenting in real time, thus I'm sharing it here and I will update this post as we go along. 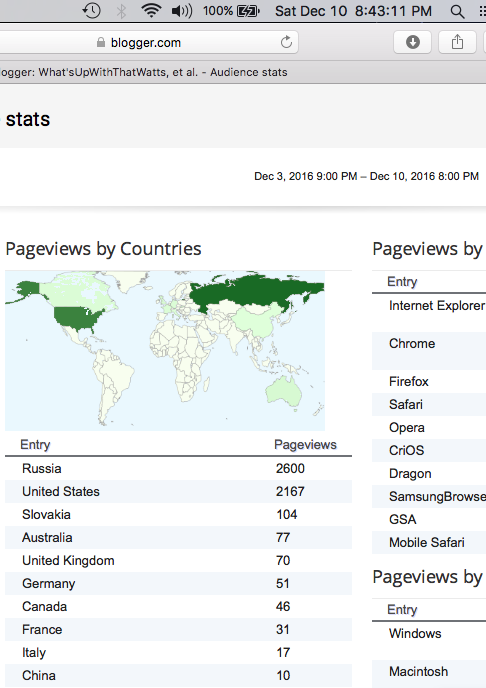 Given all the advocacy blogging I've been doing lately and now that the Russians are looking in, (and who knows how many other angry sinister interests), I figure this is a perfect time to write a bit more about myself and what motivates me, before the demonizing starts in.

A recollection of what went into creating this individual who appreciates Earth as a real physical entity as opposed to a commodity good only for the plundering. 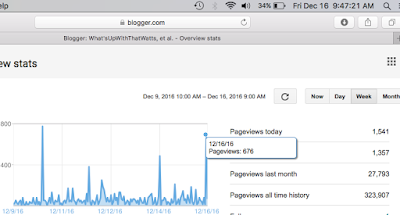 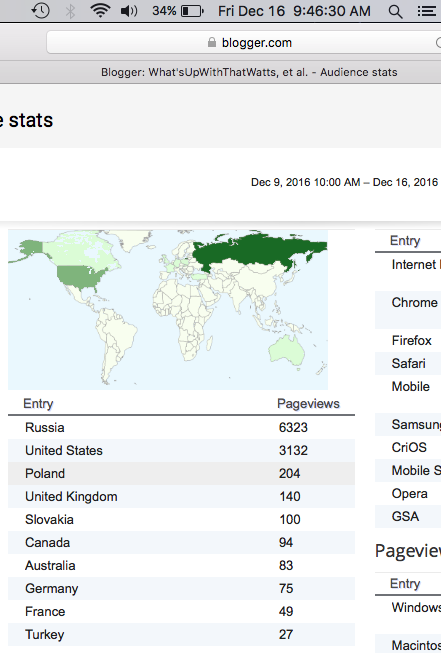 I'm a 61 year old independent, unaffiliated individual who has followed the path less traveled.  Way back as a kid, I didn't quite trust the Chicago's Museum of Science and Industry portrayal of the magical future, nor the glitzy corporate/Hollywood/TV advertisements.  See, the whole thing just didn't quite jive with what I was seeing out the window while riding the L train and what I was beginning to learn about the world around me.


By high school graduation in 1973, besides learning the basics of climate science, I'd outgrown the notion that a human can have a direct understanding of God, (that's just our ultimate ego trip), and I'd likewise outgrown the Reaganomics notion that Too Much Was Never Enough and I made a deliberate decision to live as materially minimalistic life as feasible, including a lean diet.  Coming from a financially strapped background it wasn't that difficult.  I had to work for a living, dancing the swords edge of life my entire life.  If I didn't work I didn't eat, nobody else there with the ability to save me, they were all on their own too.  As is the case with most Americans!  But, it has worked out pretty well for me.   Sure, I'm as financially poor as ever, but there is so much more to life.

My fortune is in my fitness and good health and knowing how to work and listen with the employer's best interest in mind.  Not out of love for employers, but out of enlightened self-interest.  The better job I do, the more boss leaves me alone, the more freedom I have, the more work comes to me.  One hand washes the other, as my mother says.  That is the traditional American Way!

I am a respected member of our community and have a solid reputation as a "stand up" guy and a conscientious, skilled worker in various trades.  That is jobs where one is required to produce something; on time; to the satisfaction of other's expectation!  In other words, I'm a realist that has a deep appreciation for the physical world around him.

I say I'm independent and unaffiliated because I am, although I am a registered Democrat and usually participate in the caucus process, even been a delegate to a couple State Democratic Assembly/Conventions.  But, that's just what citizens do. 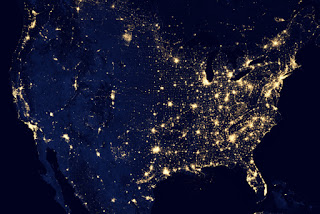 Take a look at that satellite image of USA at night, find the Four Corners region of USA?  The big dark region in the lower left quadrant with some filaments and a few halos of light, that's home for me.  I live way out on the edge of one of those filaments because I look at life a bit differently then the rest of youz.  Why?  Because as a kid my eyes were opened to the wonders of the world and the amazement never stopped.  It is important for me to lay this out, because this is what motivates me.  Others will fabricate who knows what all, but if you want to know about me, try to imagine a kid growing up in fascinated amazement at the world that surrounded him.

It's a long story that I recently recollected over at my haunt the CenterForInquiry's internet forum, allow me to share.

Any of you old timers remember 60s, 70s all that awesome incoming Earth and solar system science information, Plate Tectonics, geology and Earth’s evolution and Moon’s origin, humanity and the diversity of life and what made it tick?

DNA was discovered a couple years before I was born and the shocked amazement was still rippling through schools during my grade school years.  It was that transition when it still seemed like many of the big questions about the origins of man and life and the moon and the planets, were still unknowns and speculation.

Then one by one the scientific discoveries revolutionized understanding.  The first one I remember was Plate Tectonics hitting the headlines and piecing together that story of moving continents in my imagination, then looking into the deepest depths of the oceans;  Leaky and all who followed helping to unravel humans fascinating origins.

The moon, I can still remember it as the unachievable dream.  At fourteen I was watching as those first steps went down and following visits unfolded and the moon never looked quite the same anymore.

That Christmas eve Earthrise picture hit me like only the first time for a teenager can, too bad that shared sense of amazed discovery will never come around again.

Then the two Voyager Missions and those planets finally became real individuals with characteristics we never got close to imagining.  Then holy moly, who’d have thought the moon was a product of a collision with Earth; not only that, the moon was intimately linked to, if not the key to life developing here on Earth; and how about those Black Smokers at the bottom of the ocean, wow.  We’re even getting a grasp on billions of year old mineral evolution and its intimate link to life processes.  And you mean, that atmosphere is a product of evolution, wow.

Astounding, but have we learned anything important, like appreciating our home planet and wanting to nurture her?

I'm learning to understand that I probably wouldn’t know the half of it, if not for my early years when I fit on grandma’s lap and she’d go through her ancient Encyclopaedia Britannica, to entertain me with mysteries of mammoths and ice ages and dinosaurs, the horrors of polio and Salk’s child-saving and history changing discovery.  Tours of planets when we barely had a clue and questions overwhelming known facts.  It was fun and I was hooked on wanting to know those answers, like countless generations before.  I have the feeling we fed off each other, she enjoyed the sharing and this little bundle of curiosity, I enjoyed the hearing and it lasted a nice little while until I outgrew her lap and moved onto other adventures.

I should also mention my mother who made sure we visited all the Chicago museums regularly and who admonished us children to breath deeply the fresh country air and savor how special it was, the same woman who would gaze upon the city and reminded us children to, Behold what two hands have achieved.  She helped form children with a deep appreciation for this country and all it took to achieve what we have.  My writing is driven by a desire to convey a sense of some of the wonders and amazements I have experienced.

It’s fun getting older, and how those forgotten recollections have a way of resurfacing and weaving themselves together into a coherent appreciation of how we got to be who we are.

Unfortunately, America has been thrust into an existential crisis like none since the civil war, with this new Russian Obligate American CEO Trump.  So rather than writing about what I'd like to, I'm desperately trying not to waste any time in this critical period and doing my best to arouse my apathetic American neighbors. 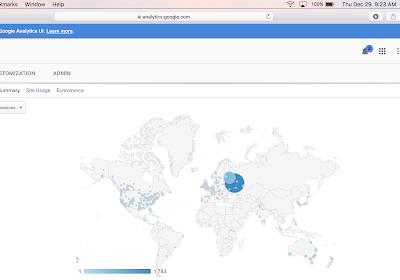 Posted by citizenschallenge at 8:38 PM